Kaiserslautern is a city in southwest Germany, located in the Bundesland of Rhineland-Palatinate at the edge of the Palatinate forest. The historic centre dates to the 9th century. The prehistoric settlement in the area of what is now Kaiserslautern has been traced to at least 800 B.C. Some 2,500-year-old Celtic tombs were uncovered at Miesau, a town about 29 kilometres west of Kaiserslautern. The recovered relics are now in the Museum for Palatinate History at Speyer. Kaiserslautern received its name from the hunting retreat of Holy Roman Emperor Frederick Barbarossa who ruled the Holy Roman Empire from 1155 until 1190. The small river Lauter made the old section of Kaiserslautern an island in medieval times. Ruins of Frederick's original castle, built 1152–1160, can still be seen in front of the Rathaus (city hall). A second castle, Nanstein Castle, was built at Landstuhl to guard the western approach to the city. Cheapish Ryanair flights enabled us to reach Frankfurt (Hahn) and like many before and after us, we were conned into believing that this place is somewhere relatively near Frankfurt (nice marketing Mr O’Leary – Ed). In reality it requires a coach journey of almost 2 hours to reach the city centre. This back of beyond outpost is closer to Luxembourg and I guess, as we all ought to realise, with this carrier you get what you pay for. With a heavy police escort our coach, containing many businessmen attending a trade fare, made its way to the destination from where we were able to catch a train to Mannheim where we were to stay for 2 nights either side of the match. The Fritz Walter Stadion is named after Fritz Walter the captain of the German national football team that won the 1954 FIFA World Cup or the "Legend of Bern", who also played for the club throughout his career. The Stadium was built on the Betzenberg Hill, hence its nickname "Betze", and was opened in 1920. Spurs had good reason to feel confident going in to this match with a 1-0 advantage from the 1st leg. However, this Pieman was furious with the then Spurs manager George Graham, who allowed the German side off the hook by playing a shamefully negative game. An away goal would have knocked the stuffing out of the hosts but just like the Peter Shreeves team at Feyenoord in 1991/92, far too much respect was given to the opposition. Two goals in the closing minutes saw Kaiserslautern progress to the next round. The beer was superb though! 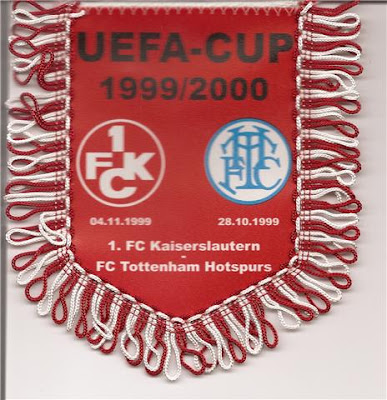