Weston-super-Mare, also known as just Weston is a seaside town in North Somerset, England, on the Bristol Channel 18 miles south west of Bristol between Worlebury Hill and Bleadon Hill. It includes the suburbs of Oldmixon, West Wick and Worle. Weston-super-Mare is a tourist destination, with its long sandy beach, Helicopter Museum, Weston-super-Mare Museum, Grand Pier, SeaQuarium aquarium and seasonal Wheel of Weston. During World War II over 10,000 official evacuees were accommodated in the town, however only 130 spent four or more years in the town. The area was also home to war industries, such as aircraft and pump manufacture, and a Royal Air Force station at RAF Locking. The town was also on the return route of bombers targeting Bristol and was itself bombed by the Luftwaffe. Ritchie Blackmore, guitarist and founding member of Deep Purple and Rainbow was born at Weston-super-Mare. 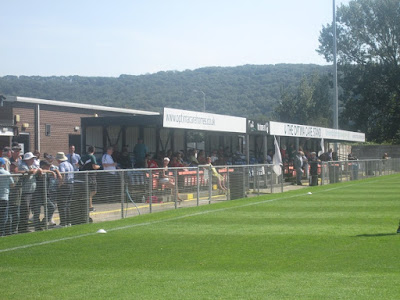 The football club was formed in 1887. The team's first record of a competitive match being against near-neighbours Clevedon Town in a "Medal Competition" organised by the Somerset FA. In 1900 they joined Division two of the Western Football League, but left after two years. In 1910 they re-joined this league and played there until World War I. Between the wars, the club played in the local Bristol and District Football League and then the Somerset County League, but the club disbanded upon the outbreak of hostilities in 1939. The club reformed in 1948 and immediately re-joined the Western League, initially in Division Two. At this time the team played at the Great Ground in Locking Road, where initially there was no cover for spectators and the players had to change in a marquee. The club's most successful cup run came in the 2003–04 season, when the Seagulls reached the Second Round of the FA Cup. After defeating Dorchester Town, Chesham United (via a replay) and Welling United in the qualifying rounds, Weston secured a 1–0 away win against Farnborough Town to progress from the first round. They were awarded with an away tie against Third Division side, Northampton Town where they were eventually beaten 4–1. In the same season, Weston would equal their best performance in the FA Trophy, reaching the Fourth Round of the competition. 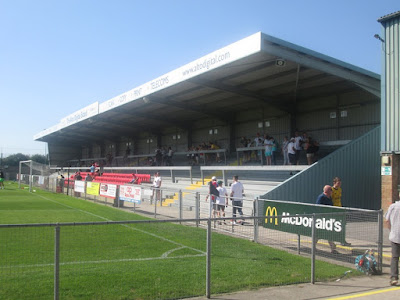 On arrival at Weston-super-Mare station, I was able to revisit the buffet bar “Off The Rails” where I enjoyed a very good pint of Gorge Best (4.0%) from the Cheddar Brewery. The route to the ground takes you over a curved road bridge and at the other side, adjacent to the rugby club is the Wooden Spoon café, where the Monster breakfast was consumed by this Pieman (just about managed it). 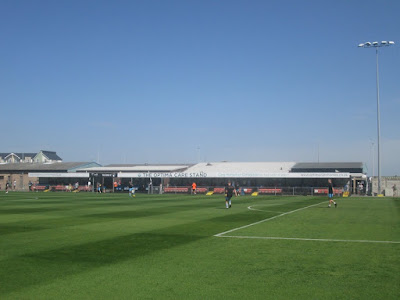 It takes no more than half an hour to walk from the station to the Woodspring Stadium, much of the route taken up by industrial and retail outlets. It is as you cross over another railway line that you get your first view of the ground, which is situated, in the shadow off Bleadon Hill, part of the Menidps, an imposing and impressive sight. 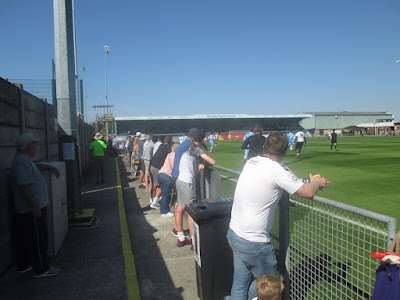 The stadium has clearly benefited from investment in recent times. The covered terrace behind one of the goals is impressive and provides a good vantage point from where to view proceedings. This structure also contains a few rows of seats towards the front in the centre. Along the main side of the pitch is a covered seated stand and behind the other goal is a basic covered area, which at least would provide additional protection from adverse weather. 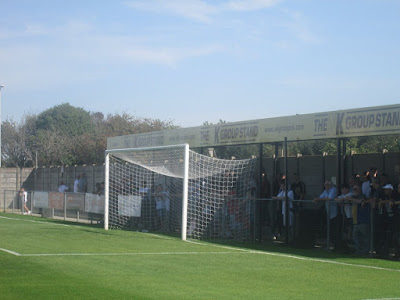 This match was at times a feisty affair and the resultant red cards (one per team) underlined this. The home side took the lead with a well-taken goal early on. The visiting keeper was also called to make a fine save, just managing to tip the ball over the bar. However, Poole Town started to take the game to their hosts and following the dismissal of a home player, it was no surprise when they levelled shortly before the break. 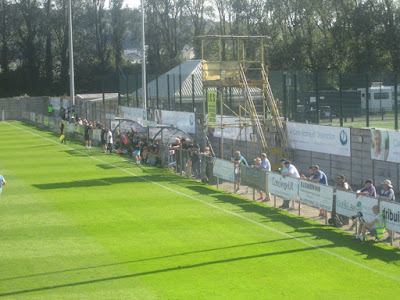 A couple of delays ensued when firstly, the stanchion behind the goals snapped following a collision between a Weston forward and the post, the broken pole hitting the keeper on the head. Secondly, a dog (still attached to its lead) joined the match. The extreme heat of the afternoon must have taken its toll on the players and it is to their credit that they continued to play. Spectators too will have endured the hot conditions. This Pieman, on return to the station, took delight in Piston Broke (4.5%) from the Box Steam Brewery, before catching the 18:00 service to London Paddington. 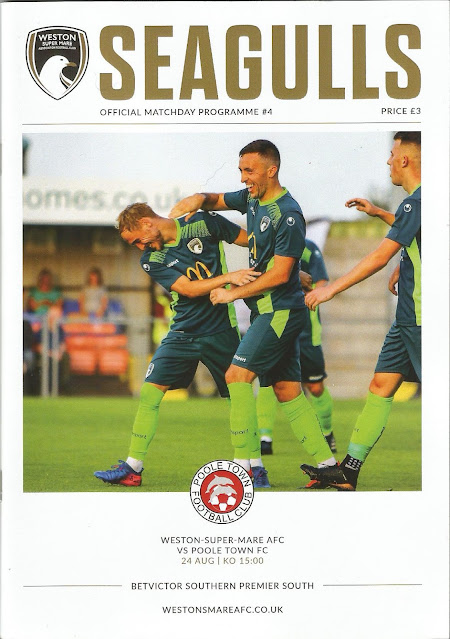 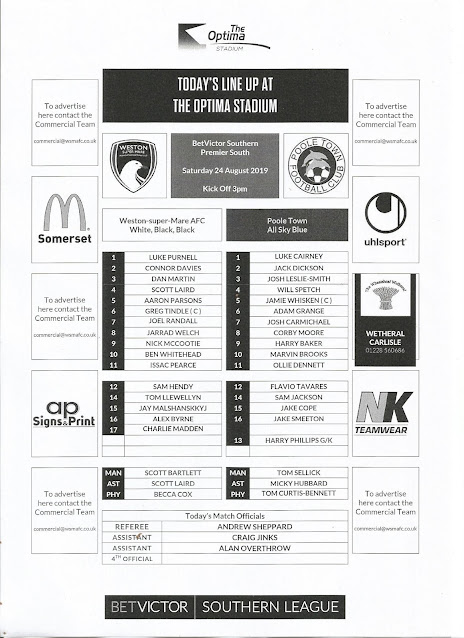 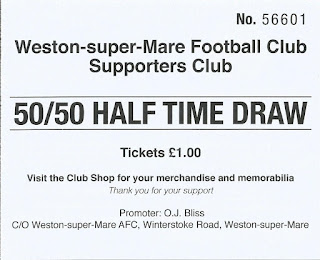