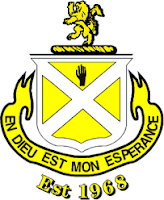 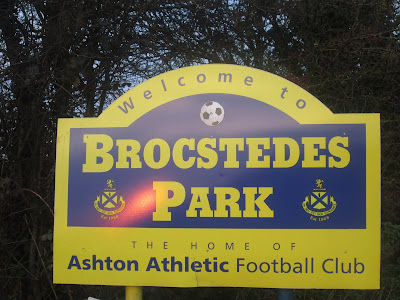 Ashton Athletic FC was formed in 1968, initially as a Sunday league club playing in the Wigan Sunday League. After winning every division in the league in successive seasons, they switched to playing Saturday football, joining the Warrington & District League. Success in the Warrington League saw the club join the Lancashire Combination in 1978. However, the move up saw the club struggle, finishing bottom of the league in 1978–79 and 1981–82. When the league merged with the Cheshire County League to form the North West Counties League in 1982, Ashton were placed in Division Three, which they finished bottom of in both 1982–83 and 1983–84. After a fourteenth-place finish in 1984–85, they finished bottom of the table again in 1985–86. At the end of the season the club were expelled from the league due to Brocstedes Park failing to meet the ground grading criteria. They subsequently dropped into Division One of the Manchester League. They continued to struggle in the Manchester League, with several lower-half finishes before finishing bottom of Division One in 1989–90. They finished bottom again in 1994–95. The 2005–06 season saw them finish fourth in Division One, and after applying to re-join the North West Counties League following improvements to Brocstedes Park, the club were accepted into Division Two. The 2016–17 season saw them win the Lancashire FA Challenge Trophy with a 2–1 win over Radcliffe Borough in the final. 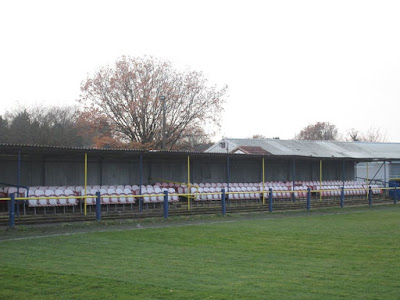 My journey from London Euston was to Wigan North Western, where after a decent late breakfast, I adjourned to The Anvil, a pub familiar to me. At this establishment I enjoyed a pint of Atomic Theory IPA (3.8%). This Jennings brew was excellent value at £2:50. I also visited The Moon Under Water (JD Wetherspoon), where Scaredy Cat (4.3%) from Moorhouses Brewery came in at £1:65 with my CAMRA discount voucher. 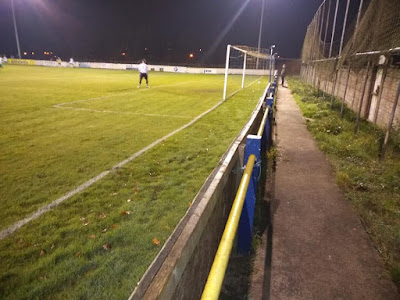 Bryn is the first station after Wigan North Western. I had intended to catch the 14:52 service and was actually sitting on the train. However, we somehow managed to lose our driver! Not to worry as the 15:21 ran to time and I was soon at Bryn. I would estimate that my walk from the station took less than twenty minutes to reach the ground (even less if you cut across the field just after the big church), where I was able to take some daylight photographs (just). With plenty of time to spare, I headed back to the area around the station where at “Mr English Traditional Fish and Chips” the haddock and chips was a tasty treat. 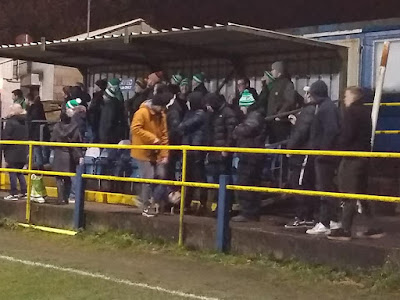 The ground pretty much backs on to the northbound slip road of the M6 (you cross over the motorway when walking from the station). All of the club and spectator facilities are situated on one side of the ground. A spacious clubhouse with a bar along with the changing facilities is housed in the main building. There are two covered seated stands. One is a long structure containing three rows of seats (there is a small area at the far end, which would also enable standing if the weather dictated so). The other smaller stand is marked for the use of officials but this was taken over by many of the visiting support for the first half of this match. My half time Bovril was purchased at the tea bar located in a converted shipping container. The remainder of the ground is railed off with hardstanding. 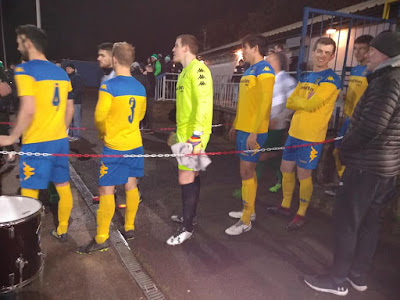 This match saw Ashton Athletic in 11th place pitted against 9th place Northwich Victoria. The well supported visitors took the lead with a deflected strike with little over a minute on the clock. Despite this setback, Ashton gradually grew into the match and levelled through Christopher Bandell midway through the first period. A super strike from Paul Watson and another goal from Bandell sealed the win for the home side and I believe the result to be a fair reflection of proceedings. 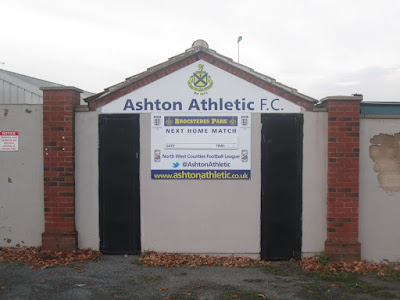 I have only seen a few matches in the North West counties League, but have always been impressed with the commitment on and off the field. The road immediately outside the ground is unlit and this pedestrian was grateful to those leaving after the match for acknowledging my presence. The 22:08 service from Bryn to Liverpool Lime Street ran as scheduled and I was at my hotel just before 23:00. I enjoyed my visit to Brocstedes Park and my only regret was that my gloves had remained in Hertfordshire! 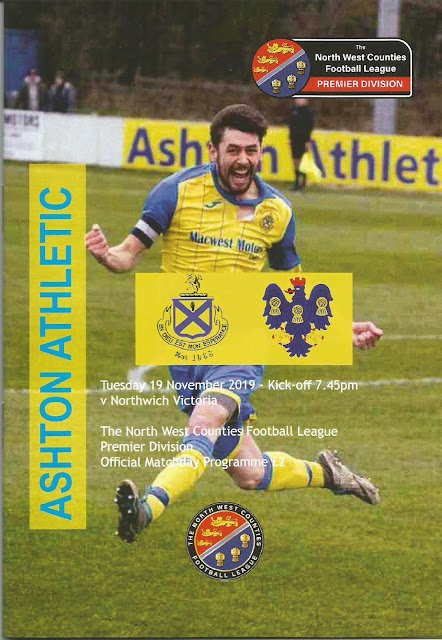