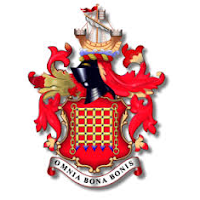 Harwich is a town in Essex and one of the Haven ports, located on the coast with the North Sea to the east. Its position on the estuaries of the Stour and Orwell rivers and its usefulness to mariners as the only safe anchorage between the Thames and the Humber led to a long period of maritime significance, both civil and military. The town became a naval base in 1657 and was heavily fortified, with Harwich Redoubt, Beacon Hill Battery and Bath Side Battery. Harwich today is contiguous with Dovercourt and the two, along with Parkeston, are often referred to collectively as Harwich. Harwich Dockyard was established as a Royal Navy Dockyard in 1652. It ceased to operate as a Royal Dockyard in 1713 (though a Royal Navy presence was maintained until 1829). During the various wars with France and Holland, through to 1815, the dockyard was responsible for both building and repairing numerous warships. The Royal Navy no longer has a presence in Harwich but Harwich International Port at nearby Parkeston continues to offer regular ferry services to the Hook of Holland (Hoek van Holland) in the Netherlands. 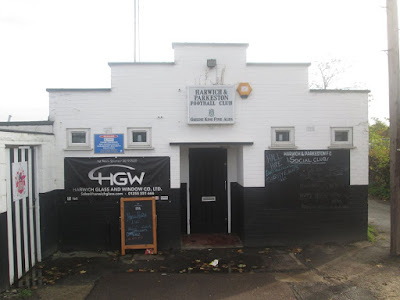 The football club was established in 1877 and reached their first cup final in 1891, losing to Clapton in the Essex Senior Cup. In 1898 they moved to the The Royal Oak Ground and also reached the final of the FA Amateur Cup, losing 1–0 to Stockton. However, they did win the Essex Senior Cup, that season beating Leytonstone. The club were founder members of the South East Anglian League in 1903 and were runners-up in its first season. However, they finished bottom of the league the following season. In 1934–35 the club reached the first round of the FA Cup, but lost 3–0 at Bristol Rovers. In 1935 the club became founder members of the Eastern Counties League and shared the first championship with Lowestoft Town. Following spells in the Athenian and Isthmian League, the club returned to the Eastern Counties League, before re-joining the Border League in 2010. Despite only finishing tenth in 2017–18, the club were promoted to the new Division One South of the Eastern Counties League. 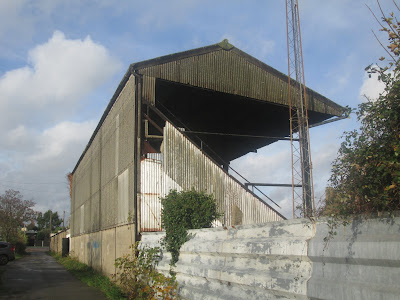 My journey to this match involved catching a train to Manningtree in order to get a connecting service to Dovercourt. With plenty of time to spare at Manningtree, I took the opportunity to visit the long established buffet bar on the platform, where I enjoyed a pint of Morland Bitter. On arrival at Dovercourt, I headed for the Bottle Kiln (JD Wetherspoon). This establishment was previously a Co-op furniture store. Robinson’s Cascade IPA was my choice here and an inspired choice it was too. 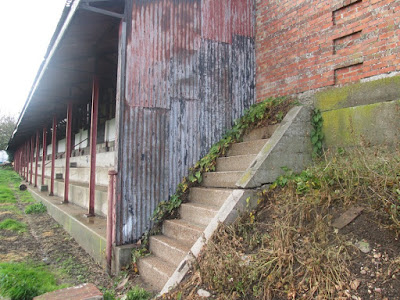 It takes less than ten minutes to walk from the railway station to the Royal Oak ground, with the floodlights visible as you walk down the hill. I have long wanted to visit this ground due to the magnificent history of the club and numerous reports of the wonderful grandstand and other aspects. I was not disappointed and rather hope that these photographs do the place justice. 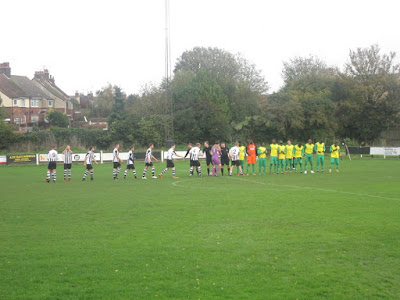 The grandstand takes centre stage and is an iconic relic of a bygone era. Two thirds of the structure are now closed off, presumably for safety reasons. This leaves just two operational rows of seats at the front. There is a decent view from these seats apart from a couple of posts. To reach this area involves climbing a steep flight of steps. Behind the goal that backs on to the road is an equally glorious covered terrace with steep stepped terracing. These are the only covered spectator areas. 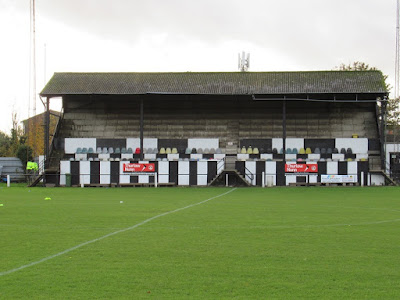 Opposite the grandstand, the area behind the dugouts is rather overgrown and backs onto housing. This space is banked and I would imagine that it once provided an excellent vantage point from where to view the action. A separate building housing the changing facilities is situated behind the remaining end of the ground. I understand that once upon a time there was terracing at this end. At the corner of this end is another separate building which is the refreshment bar. An impressive separate toilet block is situated along the side towards the grandstand. Toward the road end of the ground is a clubhouse where locals had gathered earlier in the day to watch the rugby world cup final. 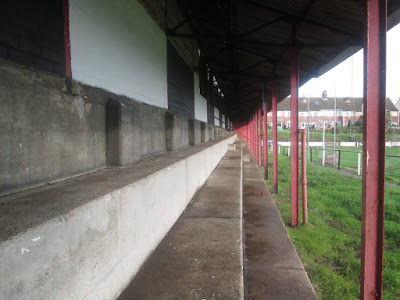 This match saw the home side (twelfth in the table) take on top of the pile Lopes Tavares who had won eight of their nine matches so far. A tetchy (at times) affair ensued with Harwich taking the lead in the first period only to be denied a win when the visitors levelled in the second half with a contentious goal. I really enjoyed my visit to this ground and was particularly grateful for the complimentary tea (thanks Tony) offered as thanks for travelling. 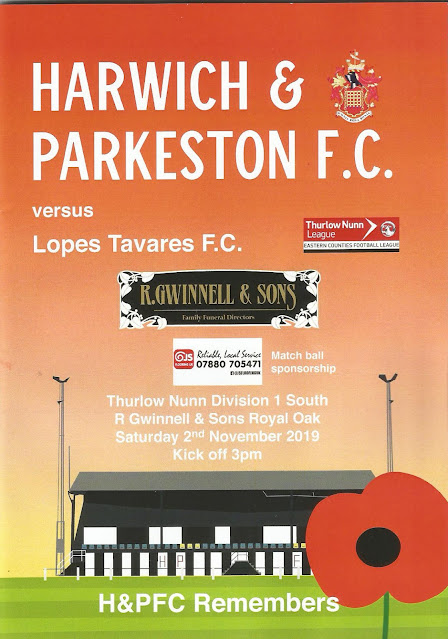