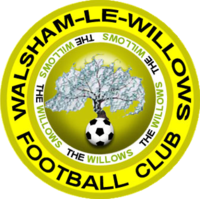 Walsham-le-Willows is a village in Suffolk, England, located around 2½ miles south-east of Stanton, and lies in the Mid Suffolk council district. Queen Elizabeth I had granted Walsham-le-Willows to Nicholas Bacon, Lord Keeper of the Great Seal, in 1559. Because the village is documented unusually fully in surviving records of the time, the Cambridge historian John Hatcher chose to use it as the setting for his semi-fictionalised account of the effects of the mid-14th century plague epidemic in England, The Black Death: A Personal History (2008). The first regular daily bus service from Walsham to Bury St. Edmunds was started in February 1924. The make of bus was Tilling Stevens and it was operated by the Eastern Counties Roadcar Co. In 1931 the company was renamed Eastern Counties Omnibus Co. The bus was first manned by two local men – Fred Ellis was the driver and Neil Debenham was the conductor. This duo worked together for several years. In later years the service was extended to run to Stowmarket. 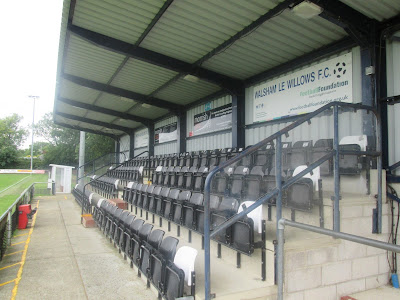 Walsham-le-Willows FC was founded around 1890, and played at the Sumner Road sports ground where there was a pavilion with a thatched roof. During World War II, the ground was ploughed up to grow food and was not returned to sports use until 1951. The club was a founder member of the St. Edmundsbury Football League in 1907 and won the Suffolk Junior Cup in 1988, 1989 and 1990. After winning several league titles, the club switched to the Suffolk and Ipswich League in 1989. It won the Senior Division in 2001–02 and again in 2002–03. In the following season, the club finished second, but earned promotion to Division One of the Eastern Counties League. The club finished fourth in their first season in the division, narrowly missing out on promotion. They also reached the final of the Suffolk Senior Cup, losing 2–1 to Needham Market. The following season, they reached the final again, this time beating Capel Plough 4–3 after extra time. In 2006–07 the club won Division One, and was promoted to the Premier Division. 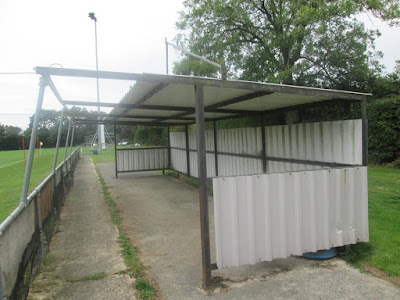 I was fortunate to be offered a lift to this match, the journey via the M11, A11 and A14 took around an hour and a half. I assume there to be public transport options, as I saw a bus heading for Bury t Edmunds when in the main street of the village. However, as is often the case in these rural areas, it is possible that the regularity of the service is sparse. 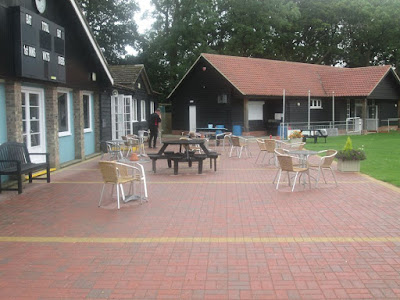 On arrival I was able to take a few early photographs whilst there were just few people about. The club officials I spoke to were very accommodating and willing to chat, which set the scene for the day. I then went back to the main street for lunch at Moriarty's, a relatively recently refurbished building now operating as a café. First impressions were that this was an up market establishment enjoying good trade. My choice of jacket potato with cheese, beans and salad, washed down with a pot of English breakfast tea was inspired. I now know why this establishment is popular and deserves the reviews I have read.

Back at the ground, around an hour before kick-off, there was an opportunity to take some more pictures., before being invited into the boardroom for a cup of tea. A lovely gesture that also gave me the opportunity to view a collection of photographs charting the progression of the development of the ground and the additional facilities across the road. The invitation was repeated at half time where once again refreshment was enjoyed. The football club, along with various other sporting arms (not least cricket), form the wider community sports association for the village. The football club is clearly thriving at the current level and the efforts of the off the field team should not be underestimated.

The main clubhouse buildings are used all year round with cricket and football dovetailing successfully. These facilities are situated behind one of the goals, immediately as you enter the ground. There is a covered seated stand along the side of the pitch that backs on to the car park. A very impressive aspect of this stand is that the earmarked area for wheelchair users has a lower perimeter fence in front of it. Often clubs do not appreciate that wheelchair users need to be able to see over fences – well done Walsham! Behind the other goal is a covered standing area, which would provide decent shelter on a rainy day. One other structure worthy of mention is the ancient pavilion, which is situated at the far side of the cricket area adjacent to the football pitch; just looking at it takes you back in time. 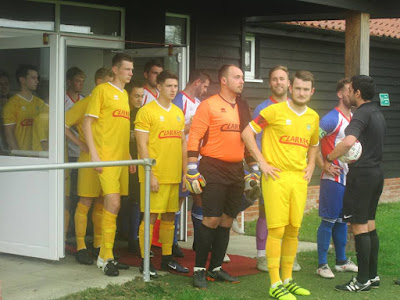 Visitors, FC Clacton had a fine band of enthusiastic supporters with them. When chatting before the match, I was informed that they were not expecting their side to get anything from this match. Despite what the team sheet posted by the main stand might have indicated, FC Clacton only had one substitute. The home side was also having a great start to their season. The Clacton fans would have been further dejected when their substitute was forced into action early in the match. However, those fears proved unnecessary as they visitors came from behind in the first half and actually led briefly in the second period before settling for a well-earned draw. A similar duration for the journey home meant that this Pieman was able to reflect on a fine trip to a wonderfully friendly club. 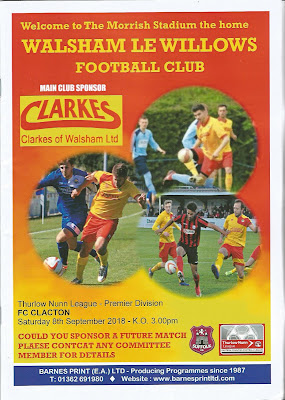