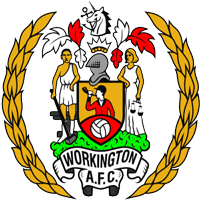 Workington lies astride the River Derwent, on the West Cumbrian coastal plain. It is bounded to the west by the Solway Firth, part of the Irish Sea, and by the Lake District fells to the east. The town comprises various districts, many of which were established as housing estates. North of the river these districts include Seaton, Barepot, Northside, Port and Oldside. On the south side are the districts of Stainburn, Derwent Howe, Ashfield, Banklands, Frostoms (Annie Pit), Mossbay, Moorclose, Salterbeck, Bridgefoot, Lillyhall, Harrington, High Harrington, Clay Flatts, Kerry Park, Westfield and Great Clifton. The Marsh and Quay, a large working-class area of the town around the docks and a major part of the town's history, was demolished in the early 1980s. Much of its former area is now covered by Clay Flatts Industrial Estate. Some parts of the town north of the river date back to Roman times. It was in the 18th century, with the exploitation of the local iron ore and coal pits, that Workington expanded to become a major industrial town and port. Iron and steel manufacture have always been part of Workington’s heritage and it was here that the famous Henry Bessemer first introduced his revolutionary steel making process. In recent years, with the decline of the steel industry and coal mining, the town has diversified into other forms of industry. 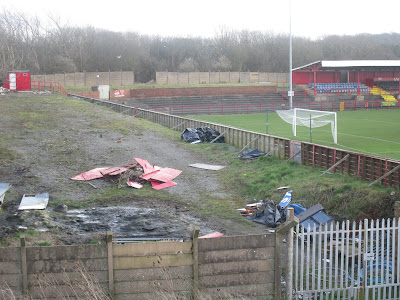 Association football was introduced to Workington in the 1860s and further popularised when a group of steel workers migrated to the town from Dronfield, Derbyshire. They were workers of the Charles Cammel and Co steel works that arrived in the town in 1884. It is estimated that 1,500 townspeople moved to Workington. 'Dronnies', as the people of Workington called the newcomers, formed Workington AFC in 1888. The original Workington A.F.C. were one of the founder members of the Cumberland Association League in 1888 and played at Lonsdale Park. In 1894 they moved to the Cumberland Senior League, and in 1901 joined the Lancashire League. However, the league closed two seasons later and they returned to the Cumberland Senior League. In 1904 the club were admitted to the Lancashire Combination, but in 1910 they decided to economise and join the North Eastern League. However, after only one season, the club folded. The new Workington AFC was born in 1921 and immediately joined the North Eastern League. During the 1933–34 season, the club managed its best ever FA Cup performance, reaching the 4th round, before losing to Preston North End. Later in the decade, the club moved to its present home, Borough Park. In 1951 the club was voted into the Third Division North of the Football League, replacing New Brighton. Their first season in the League was a sign of things to come: the club finished rock bottom, and only improved by one place the following year. From 6 January 1954 to 15 November 1955 the club was managed by Bill Shankly. In 1974 and 1975 the club finished second from bottom, and in 1976 they finished bottom. In 1977 the club won only four games and again finished bottom of the league with attendances falling well below the 1,000-mark. This poor run led to the club being voted out of the League in summer 1977, replaced by Wimbledon. 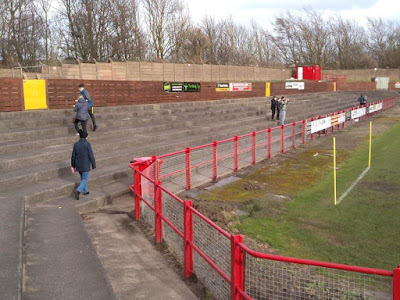 Borough Park had long been a ground that I wanted to visit, inspired by their former football league status and the images of the stadium that I had seen, truly reflecting a bygone era. The distance from London has perhaps always been a bit daunting, but in reality connections at Carlisle make a day trip very doable. I caught the 07:30 Glasgow service from London Euston and the twenty minute interlude at Carlisle facilitated a quick pint in the buffet bar on the main Southbound platform. The two preceding departures to Workington had been cancelled due to a broken down freight train, so our fifteen minute delay did not compare. 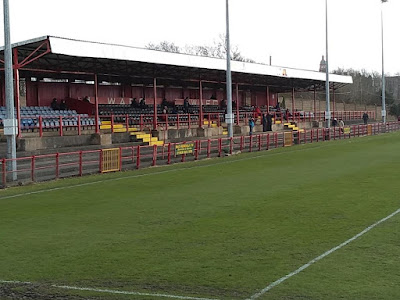 On arrival it was a short stroll of just over five minutes to reach Borough Park. On the way we passed the impressive looking Derwent Park, the home ground of Workington Town (Rugby League). The Much Travelled Adam Carne broke away from our party, temporarily to visit the other venue and was treated rather well with a club badge and a cup of tea. After getting some pictures of the exterior of Borough Park, I headed for the town centre, where at the Henry Bessemer (JD Wetherspoon), I enjoyed a couple of pints of Hocus Pocus (4.6%) from the Loddon Brewery. 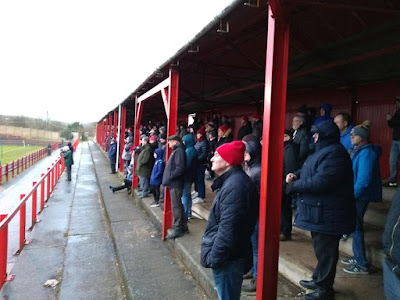 On returning to the ground, I managed to secure a match programme (sold out before kick-off) and proceeded to tour the magnificent stadium. The vast majority of the ground is given over to terracing. On the side of the ground when you enter is an area where I assume a large seated stand once existed. A much smaller version is now in situ. Opposite is a larger covered stand, with terracing in front. We opted to stand in one corner of the ground with cover immediately behind us. This proved a good choice, as we were aware that the weather would deteriorate as the match progressed. 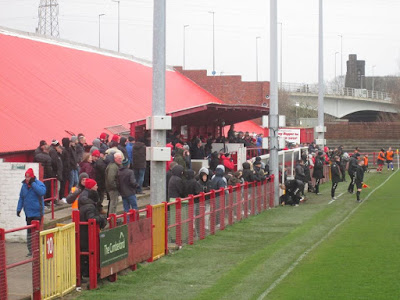 The groundstaff had already done a fantastic job in preparing the pitch for this match. Two pitch inspections in the morning, after we had left Euston, were passed. However, the ground was soft and was not conducive to good passing football, particularly in the swirling wind. It is to the credit of both teams that they managed to play good football throughout. During a minute’s silence in respect of Workington’s club chaplain before the match, the stationary match ball was blown a couple of yards by the wind. 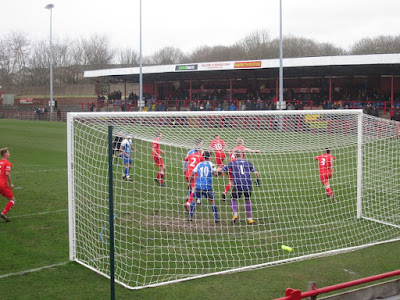 Workington led 4-0 at the break and were good value for the lead as they looked to strengthen their lead at the top of the table. Clitheroe, who had beaten their hosts in the return fixture earlier in the season pulled a goal back in the second period when we were hit by a gale of tempest proportions. This continued for the duration of the short walk back to the station, where we took refuge. Our train was only a couple of minutes late and the connecting service at Carlisle was on time. A further visit to the buffet bar was also called for. I’m really glad I made the effort to visit Borough Park, “they don’t build 'em like that anymore!” 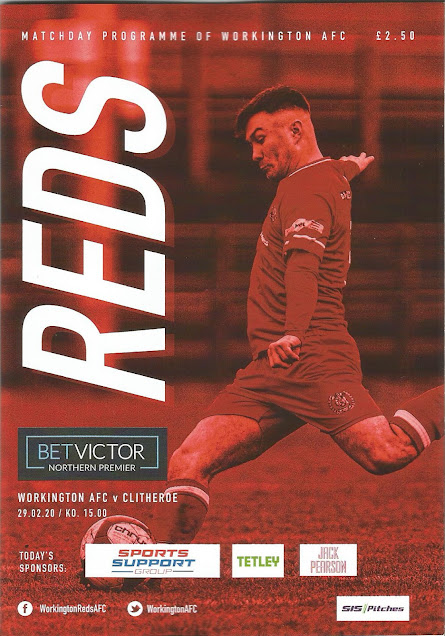 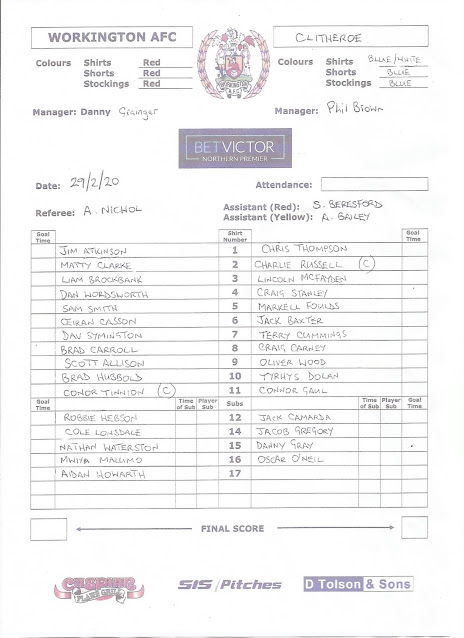