Piraeus is located within the Athens urban area, 7 miles south-west from the city centre and lies along the east coast of the Saronic Gulf. The Port of Piraeus is the chief port in Greece, the largest passenger port in Europe and the second largest in the world, servicing about 20 million passengers annually. Piraeus, which roughly means 'the place over the passage', has been inhabited since the 26th century BC. The city provides a wide variety of entertainment. Piraeus is famous for its tavernas and restaurants, renowned for their cuisine. Most are spread along the coasts of Mikrolimano and Piraiki, specialising in seafood and attracting many visitors, including tourists. The nightlife of the city is vibrant, with numerous bars and nightclubs. One of the most popular events in Piraeus is the Ecocinema International Film Festival, staged annually in late February. During this event, a number of films are screened at the Atticon Cinema and the Cineac Cinema, both of which are to be found within the city's Town Hall Square. In the summer, the Maritime Festival and the Piraeus Rock Wave Festival take place, while the Three Kings' Way Festival marks the beginning of the carnival, with all the associated costumes and entertainment.

Oλυμπιακός Ποδοσφαιρικός Όμιλος (Olympiacos Football Club) was founded on 10 March 1925. The club's initial aim, as stated in the statutes, was the systematic cultivation and development of its athletes' possibilities for participation in athletic competitions, the spreading of the Olympic athletic ideal and the promotion of sportsmanship and fanship among the youth according to egalitarian principles, by stressing a healthy, ethical and social basis as its foundation. Members of "Piraikos Podosfairikos Omilos FC" (Sport and Football Club of Piraeus) and "Piraeus Fans Club FC" decided, during a historical assembly, to dissolve the two clubs in order to establish a new unified one, which would bring this new vision and dynamic to the community. Notis Kamperos, a senior officer of the Hellenic Navy, proposed the name Olympiacos and the profile of a laurel-crowned Olympic winner as the emblem of the new club. Olympiacos is the most successful club in Greek football history, having won 44 League titles, 27 Cups and 4 Super Cups. The club's dominating success can be further evidenced by the fact that all other Greek clubs have won a combined total of 39 League titles, while Olympiacos also holds the record for the most consecutive Greek League titles won, with seven in a row in two occasions (1997–2003 and 2011–2017). 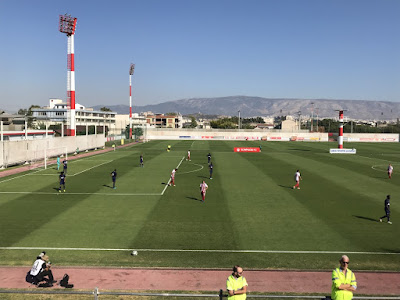 The Olmpiacos Training Centre (Proponitiko Kentro Reti) is situated only a few miles away from the main stadium. A confusing place to access as virtually everyone I spoke to was sent to a different entrance before being redirected elsewhere. The venue boasts an open stand along one side of the main pitch, a refreshment block with toilets but little else. However, you are treated to a stunning view of the ancient Parthhenon temple as a backdrop! 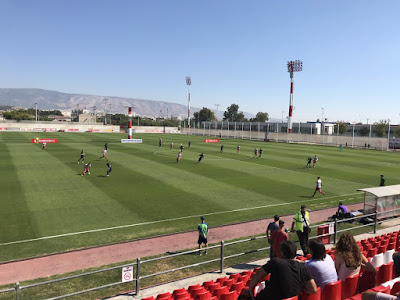 Spurs started this match in the ascendancy and a well taken early goal from the in form Troy Parrot gave them the lead. Despite controlling most of the first period, Spurs conceded a leveller on 31 minutes to Georgios Fekkas. The match was played in the extreme heat of the afternoon and it was no surprise that the second period saw some tired legs. 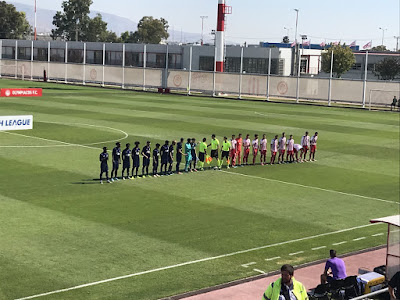