Stotfold is a small town and civil parish in Bedfordshire. It is thought to have gained its name from the northern drovers breaking their journey south at this point on the A1 Great North Road and penning their horses (stots) in enclosures (folds) before continuing their journeys southwards. Stotfold Watermill stands on the River Ivel and was one of four mills in the town. It is the only working mill left in Stotfold and is a grade II listed watermill. The Mill was fully restored after being burnt down on 15 December 1992. The Mill opened to the public in May 2006 followed by a visit from the Duke of Edinburgh on 17 November 2006. Olympic and world champion track cyclist Victoria Pendleton was brought up in Stotfold. In 2007, the cycle track between Arlesey and Stotfold was renamed in her honour. The parish church of St Mary the Virgin dates to about 1150 but was probably preceded by a series of wooden Saxon churches on the same site. The church is built of flint with Ashwell clunch stone dressings to the buttresses and is mainly in the Early Perpendicular style. In about 1450 the tower was added and the chancel widened and it is believed that the baptismal font also dates from this time and is octagonal and panelled. 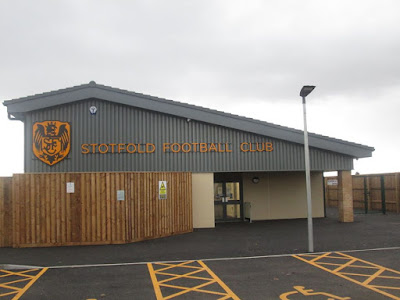 Stotfold FC was founded in 1946. The club played for many years at the Hitchin Road Recreation Ground before moving into the newly developed Roker Park ground in 1965. This ground was just a meadow named "Roker" when it was first used by Stotfold Athletic in 1911. In 1951 the club joined the South Midlands League Division Two, finishing 2nd to gain immediate promotion to Division One. They were Division One champions in 1953–54 and were promoted to the Premier Division, where they remained for thirty years. Stotfold won the South Midlands League Premier Division for the first time in the 1980–81 season. In 1984, the club moved to the United Counties League. The club moved again transferring to the Spartan South Midlands League for the 2010–11 season. 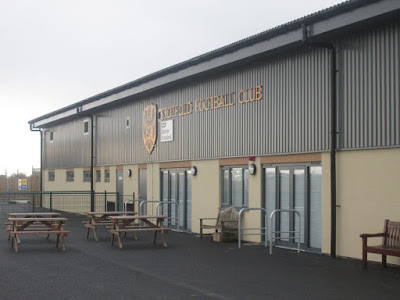 I initially visited Stotfold for a match at Roker Park in 1991. The journey on that occasion was made by public transport and involved catching a train to Letchworth and then a bus to Stotfold. For this subsequent visit to New Roker Park, I was fortunate to be offered a lift. However, Arlesey railway station is around twenty minutes' walk from the new venue and it is pretty much one straight road from there. With the ground locked at the time of my arrival, there was a limited opportunity for daylight photographs before adjourning to the nearby Fox and Duck for refreshment. This was followed by good fish and chips, purchased in the town centre. 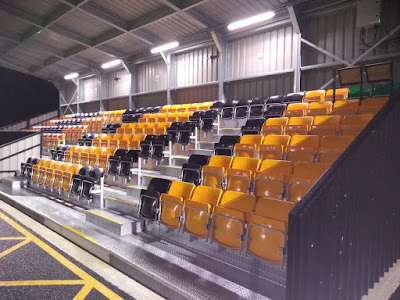 As expected the ground had a very new feel about it, clean and tidy in every respect. It is completely surrounded by a tall wooden fence. The main clubhouse building is impressive and houses the changing rooms, function room with licensed bar and a snack bar. The spectator facilities inside the ground are a covered seated stand that straddles the half way line, with toilet facilities located in a separate block immediately behind the stand. These structures are on the clubhouse side of the ground. 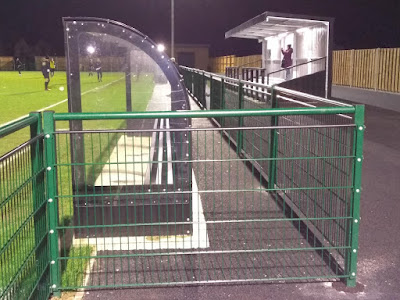 Directly opposite the seated stand is a covered terraced area. Due to the cold biting wind, this was my viewing area for the entirety of the match. A collective of groundhoppers opted for the same view and I’m sure that their massed ranks helped take some of the chill from the evening. It should also be pointed out that I counted no less than three retired colleagues at this match! 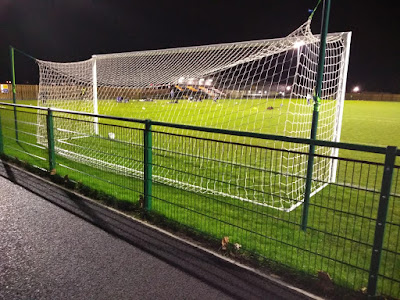 I was impressed with both teams who were keen to play attractive football despite the less than appealing temperature. The home side led by a solitary goal at the interval – a fine move culminating with the forward rounding the keeper before slotting the ball home. A second goal from a penalty (the visitors reduced to ten men as a result of the foul) and a third shortly after, saw the hosts in the ascendancy. 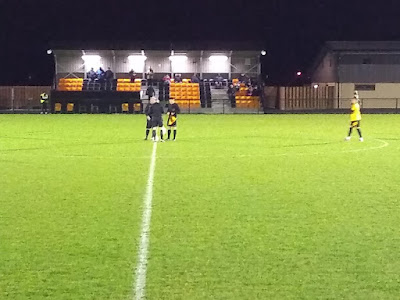 A fourth goal for Stotfold was followed by another converted penalty, this time for Buckingham Athletic that completed the scoring. There is a fair amount of development taking place around the ground and this rural setting will become less so in the near future. The journey home via the A1, A414 and A10 was good and it was nice to get indoors out of the cold! 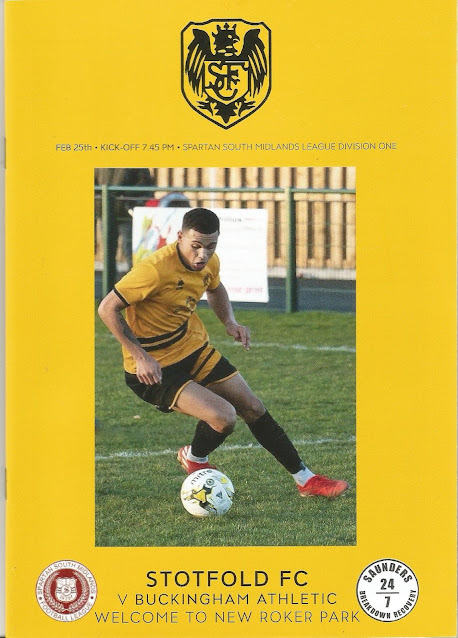