Historically part of the hundred of Wallington in the county of Surrey, at the time of the Norman conquest of England, Croydon had a church, a mill, and around 365 inhabitants, as recorded in the Doomsday Book of 1086. Croydon expanded in the Middle Ages as a market town and a centre for charcoal production, leather tanning and brewing. The Surrey Iron Railway from Croydon to Wandsworth opened in 1803 and was the world's first public railway. Later 19th century railway building facilitated Croydon's growth as a commuter town for London. By the early 20th century, Croydon was an important industrial area, known for car manufacture, metal working and Croydon Airport. In the mid 20th century these sectors were replaced by retailing and the service economy, brought about by massive redevelopment which saw the rise of office blocks and the Whitgift Centre, the largest shopping centre in Greater London until 2008. Croydon was amalgamated into Greater London in 1965. 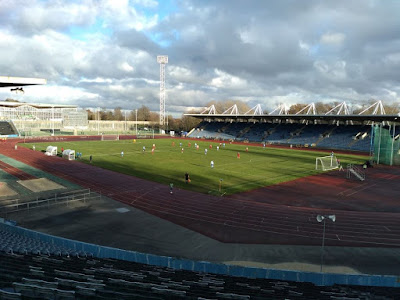 The football club was founded in 1953 as Croydon Amateurs FC and its original players came from some of the stronger clubs playing in local football. The club was specially formed to play at the Croydon Arena (still its home today) when it was officially opened in 1953. The team made its debut at the Arena against Malden Town on Saturday 5 September 1953, winning 4-3. 1964 saw them join the Athenian League where they spent the next ten years, winning the Second Division title in 1965–66, suffering relegation four years later and then gaining two successive promotions to the Premier Division as runners-up to Herne Bay (1970–71) and Harlow Town (1971–72) under the management of Jimmy Rose. Rose's departure to Dulwich Hamlet saw a mass player exodus and a season of struggle ensued. 1973 saw the suffix "Amateurs" dropped due to the impending changes to the status of players and a year later, under the management of Ted Shepherd, election to the expanding Isthmian League. The non-league scene was reorganised at the end of the 2005–06 season and this restructuring saw them placed in the Kent League where following a third-place finish in 2006–07, the club finished in mid-table the second two seasons. 2008–09 culminated with success in the Kent League Cup after a penalty shootout win over Erith Town. Following this, the club moved sideways into the Combined Counties League for the 2009–10 season. For the 2014-15 season, the club was switched to the Southern Counties East League. 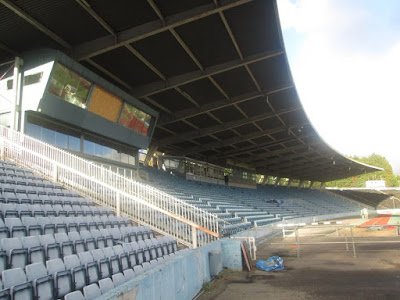 Due to restrictions currently in place at Croydon Sports Arena, the club has temporarily moved to Crystal Palace National Sports Centre. This venue was opened in 1964 in Crystal Palace Park, close to the site of the former Crystal Palace Exhibition building which had been destroyed by fire in 1936, and is on the same site as the former FA Cup Final venue which was used here between 1895 and 1914. The athletics stadium has a capacity of 15,500, which can be increased to 24,000 with temporary seating. It hosts international athletics meetings. 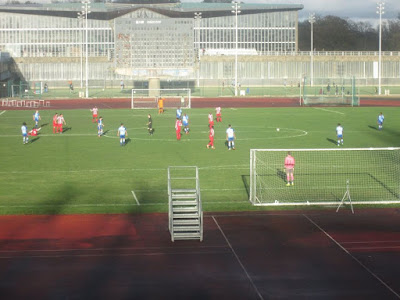 This match was not my intended destination but was most certainly a fine back up. I was able to reach the ground using the frequent London Overground service to Crystal Palace Station, which is adjacent to the park and less than five minutes walk from where you enter the stadium. I had seen this venue previously when in the area, but this was the first time I had been inside. I agree with the Much Travelled Adam Carne, that although venues with athletics tracks can often be bland and soulless, this place does have character. The stands, which would have been state of the art when constructed, offer a really good view of the entire playing area. I walked the entire circuit of the ground to take photographs and was glad of the opportunity to do so. 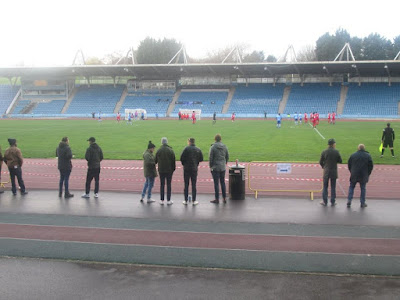 Croydon FC had prepared superbly for their big day, ensuring that plenty of programmes were available to satisfy demand and refreshments likewise. It was interesting to see the toilet facilities were restricted to a couple of portaloos, particularly in this type of stadium. Current restrictions in terms of COVID do make this understandable. A number of groundhoppers from distant parts made the journey on a cold day to be at the match. I spoke to folks I know from Liverpool and Manchester along with others from a bit closer to home. A very entertaining and unpredictable match rewarded us. 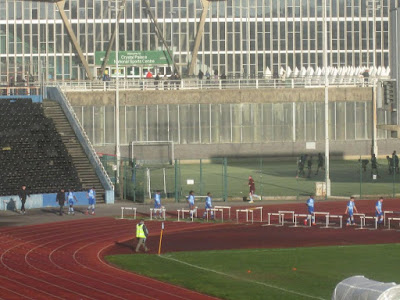 Visitors Athletic Newham (I saw them last season as Lopes Tavares) were the dominant force in the first period. Looking an impressive outfit, they raced into an early lead and by the break were 3-0 ahead. The home side did start to play better towards the end of the half, but when they missed the opportunity to reduce the arrears with a penalty, you felt that it was not going to be their day. 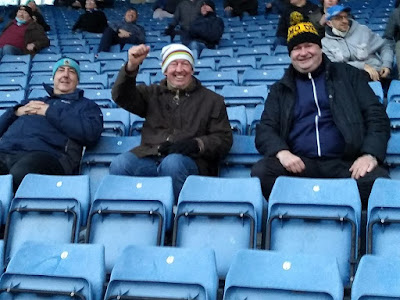 With less than twenty minutes to play, the score was unchanged. Then amazingly, Croydon scored three times and we looked set for penalties. Athletic Newham then put the ball in the net for what seemed a dramatic winner. However, this was disallowed and in no time at all Croydon scored to secure their passage to the next round. This was an incredible match and the result was a tad harsh on the visitors. However, this match served up a treat for the neutrals and Croydon deserve some good fortune, I don’t think anyone would begrudge them that. The early kick off meant getting home earlier via Canada Water and Stratford – A good afternoon out! 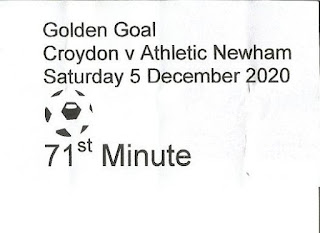 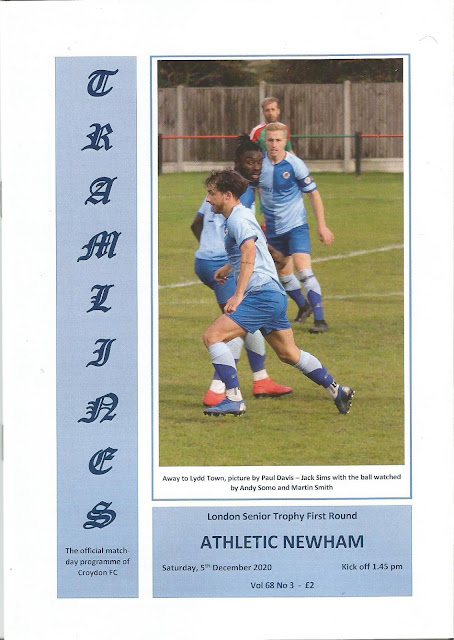