Leipzig is Germany's eighth most populated city located 99 miles south-west of Berlin in the Leipzig Bay, which constitutes the southernmost part of the North German Plain, at the confluence of the White Elster River and two of its tributaries: the Pleiße and the Parthe. The name of the city as well as the names of many of its boroughs are of Slavic origin. Leipzig has been a trade city since at least the time of the Holy Roman Empire. The city sits at the intersection of the Via Regia and the Via Imperii, two important medieval trade routes. Leipzig was once one of the major European centres of learning and culture in fields such as music and publishing. The United States turned the city over to the Red Army as it pulled back from the line of contact with Soviet forces in July 1945 to the designated occupation zone boundaries. After the Second World War and during the period of the German Democratic Republic (East Germany), Leipzig remained a major urban centre in East German terms, but its cultural and economic importance declined. Events in Leipzig in 1989 played a significant role in precipitating the fall of communism in Central and Eastern Europe, mainly through demonstrations starting from St. Nicholas Church. Leipzig was a walled city in the Middle Ages and the current ring road around the historic centre of the city follows the line of the old city walls. The tallest structure in Leipzig is the chimney of the Stahl- und Hartgusswerk Bösdorf GmbH with a height of 673 feet. Standing at 466 feet, the City-Hochhaus Leipzig is the tallest high-rise building in Leipzig and was once Germany's tallest building. 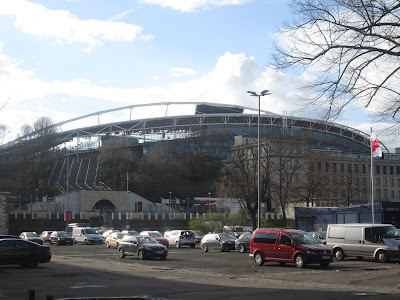 RasenBallsport Leipzig commonly known as RB Leipzig, was founded in 2009 by initiative of the company Red Bull GmbH, which purchased the playing rights of fifth-tier side SSV Markranstädt with the intent of advancing the new club to the top-flight Bundesliga within eight years. RB Leipzig plays its home matches at the Red Bull Arena.  In its inaugural season in 2009–10, RB Leipzig dominated the NOFV-Oberliga Süd and were promoted as champions to the Regionalliga Nord. RB Leipzig won the 2012–13 Regionalliga Nordost season without a single defeat and were promoted to the 3. Liga. They then finished the 2013–14 season as runners-up and were promoted to Bundesliga (II) as the first team since the introduction of the 3. Liga to win promotion after only one season. On 8 May 2016, RB Leipzig ensured promotion to the Bundesliga for the 2016–17 season with a 2–0 win over Karlsruher SC. A year later, RB Leipzig captured a place in the 2017–18 UEFA Champions League by finishing as runners-up in the Bundesliga. The establishment of RB Leipzig has caused much controversy in Germany. This revolved around the apparent involvement of Red Bull GmbH and the restrictive membership policy. This has been seen as contrary to common practice in Germany, where football clubs have traditionally relied on voluntary registered associations, with sometimes very large number of members, and where the 50 + 1 rule has ensured that club members have a formal controlling stake. RB Leipzig has been criticised for allegedly being founded as a marketing tool and for allegedly taking commercialisation of football in Germany to a new level. 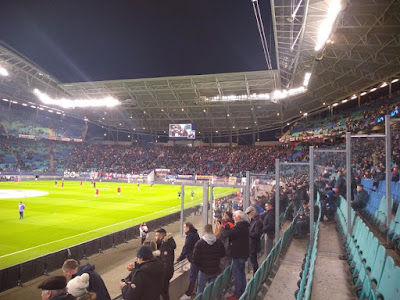 My journey from London Heathrow to Leipzig was via Frankfurt. From the airport at Leipzig there is a direct train service to the city centre. My hotel was located just five minutes’ walk from the station and proved to be a good base. With plenty of daylight to spare, I walked from the centre to the Red Bull Arena (25 minutes) to seek out some daylight photographs. 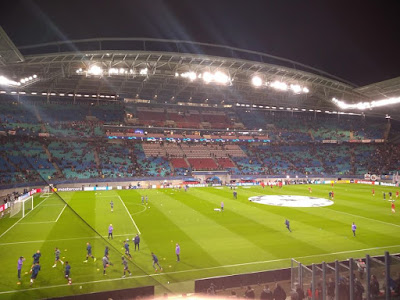 Although unable to get inside the stadium, I was able to take pictures of the exterior, much of that is the remains of the Zentralstadion, which opened in 1956. Effectively the Red Bull Arena has been built within the walls of the former stadium. Tottenham Hotspur played Lokomotiv Leipzig there in 1974 (UEFA Cup Semi – Final 1st Leg). Accordingly, it was rather nice to have some symmetry in this respect, being a “younger” supporter of the club. 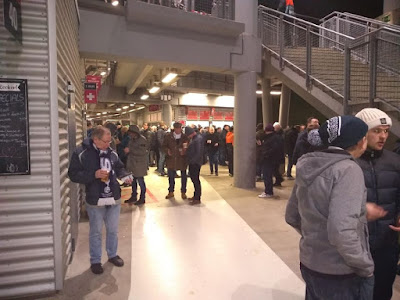 In the city centre, it was good to visit Brauhaus an der Thomaskirche, where David Price and I enjoyed beer brewed on the premises. I enjoy visiting these traditional hostelries. Unfortunately, on my second visit with Sussex Hopper (match day), it was populated by hordes of Spurs fans shouting that they had “sung in the sun and sung in the rain” – time to move on.  Earlier that day, inspired by Dom Powell  (he is a trainer-collecting chef) at Augustiner Am Markt, I enjoyed an enormous Pork Knuckle with Bavarian Cabbage. I have to confess that the size of this delightful dish beat me – it was so big! 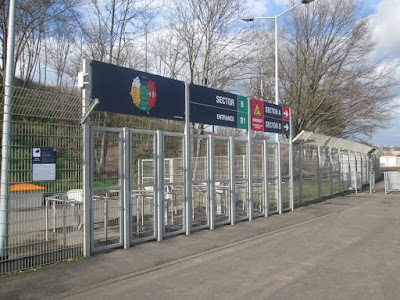 As referenced earlier, the Red Bull Arena sits within the confines of the old venue. Once inside, having negotiated a number of upward steps followed by a number of downward steps, you are in what I would describe as a typical modern German stadium. The oval shaped arena is fully covered. The view from the away section was better than many, with the stewards and opposition fans very friendly. 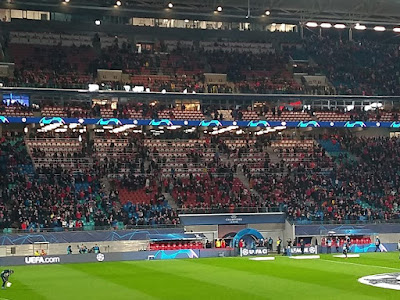 Tottenham Hotspur disappeared without trace in this match as they exited the Champions League. Already trailing 1-0 from the first leg in N17, it was always going to be a tall order to get something in Leipzig with Spurs current form. With a number of key players out injured, we witnessed a sad performance. However, with Guns N' Roses, Anthony Joshua, Saracens and Lady Gaga being signed up, we need not fear! Back via Frankfurt and nice to get home. 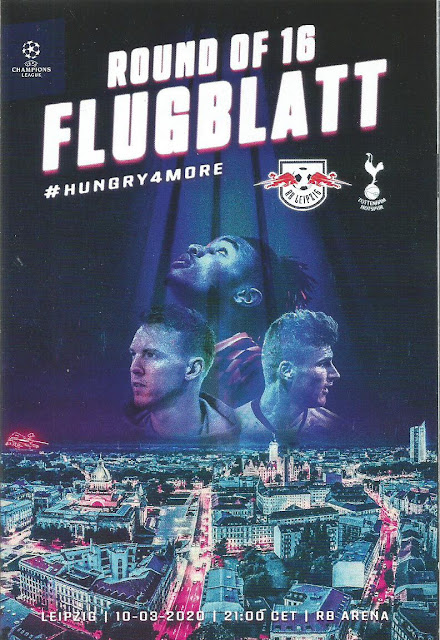