Boston is a town and small port in Lincolnshire, on the east coast of England, around 100 miles north of London. It is the largest town of the wider Borough of Boston local government district. Boston's most notable landmark is St Botolph's Church ("The Stump”) which is visible for miles around from the flat lands of Lincolnshire. Residents of Boston are known as Bostonians. Emigrants from Boston named several other settlements around the world after the town, most notably Boston, Massachusetts, in the United States. The railways came to Boston in 1848 following the building of The East Lincolnshire Railway from Grimsby to Boston and the simultaneous building of the Lincolnshire Loop Line by the Great Northern Railway which ran between Peterborough and York via Boston, Lincoln and Doncaster. This line was built before the East Coast Main Line and for a short while put Boston on the map as the GNR's main Locomotive Works before it was relocated to Doncaster in 1852. The seven-storeyed Maud Foster Tower Windmill, completed in 1819 by millwrights Norman & Smithson of Kingston upon Hull for Issac and Thomas Reckitt, was extensively restored in the late 1980s and became a working mill again. It stands next to the drain it is named after and is unusual in having an odd number (five) of sails. 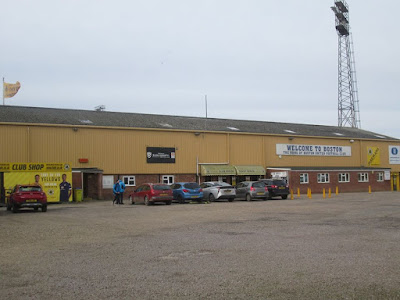 Boston United FC was founded in 1933 as a successor to a club called Boston Town. The first game was a 3–1 defeat at home to Grimsby Reserves on 26 August 1933, in front of a crowd of 1,544 The club then had a moderate amount of success in various leagues, including the Midland League and Southern League. The club's FA Cup run of 1955–56 included a 6–1 victory at Derby County, then playing in Third Division North. This was a record away win by a non-league team against League opponents in the FA Cup. This set up a Third Round match against Tottenham Hotspur of the Football League First Division at White Hart Lane on 7 January 1956. The match at White Hart Lane was played in front of a crowd of 46,185. The Pilgrims lost 4–0, but the match was more notable for the travelling support. Over 10,000 Boston supporters attended the game. A number of special train services from Boston to King's Cross were set up for the day. They were founder members of the Northern Premier League in 1968, of which they were champions four times and of the Alliance Premier League in 1979. However, their Northern Premier League title wins were not enough to gain them election to the Football League and when they won the title in 1978 they surprisingly missed out on league status in favour of runners-up Wigan Athletic, who took the Football League place previously held by Southport. In 1985 Boston United went to Wembley for the first and only time in their history for the FA Trophy Final of the 1984–85 season. Boston lost 2–1 to Wealdstone in front of 20,775. Promotion to the Football League arrived in 2002 until relegation back to the Conference in 2007. 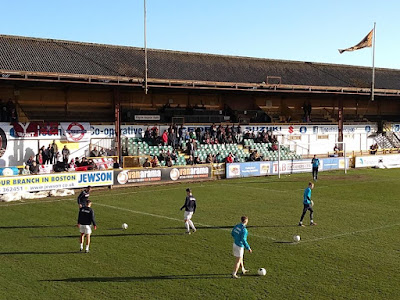 I missed out on visiting York Street when Boston United graced the Football League and have been keen to attend a match there since. The fact that the club are moving to a new stadium at Wyberton, for next season, meant a degree of urgency to this quest. An earlier attempt in December was thwarted by a postponement on the day and I went to Spalding United instead. I was fortunate to be offered a lift on this occasion and the route, via Peterborough and Spalding, took us past the construction site of the new stadium. 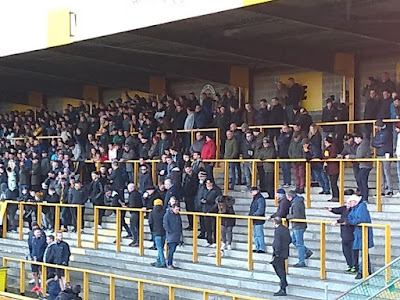 On arrival, we adjourned to the Golden Lion in the town centre, where this Pieman enjoyed a fine pint of Everards Tiger (4.2%). The second hostelry visited was the Coach & Horses, situated just a couple of minutes walk from the ground. At this establishment I delighted in a pint of XB (3.7%) from Batemans – always good to try the local ales! 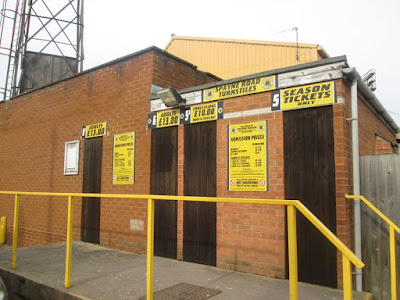 The ground is a classic from a bygone era, in that it boasts traditional floodlight pylons in each corner. The main stand has a unique appearance and the seating is elevated from pitch level. With the exception of a couple of pillars, this area offers a decent view of proceedings. There is also further seating located behind the goal at the York Street end of the ground. This end is used to house the away supporters and also includes terracing. The club administration block and changing facilities are also situated as part of this structure, which backs on to the car park. 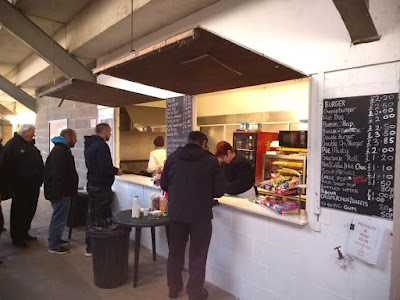 The side opposite the main stand and the remaining end are terraced, with that behind the goal going back further. All four sides of the stadium are covered. This contest between 3rd placed Boston and 2nd place York had the potential to produce a good match. Boston were on a tremendous run having won the last four matches and had only lost twice since mid-November, on both occasions to table topping King’s Lynn Town. 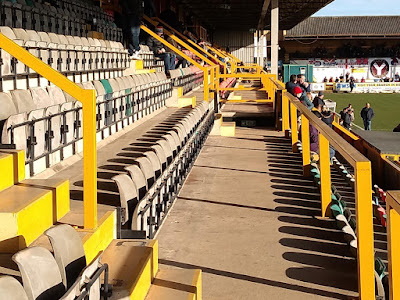 Kurt Willoughby opened the scoring for the visitors in the seventh minute when he chipped over the advancing keeper. However, the home side continued their run of form with goals courtesy of Frank Mulhern, Brad Abbott and Andi Thano. This was the first time this season that York had conceded three goals in the league. The battle for promotion is now in full swing and it will be interesting to see how this develops. Despite the forecast of high winds, we experienced a trouble free journey home. 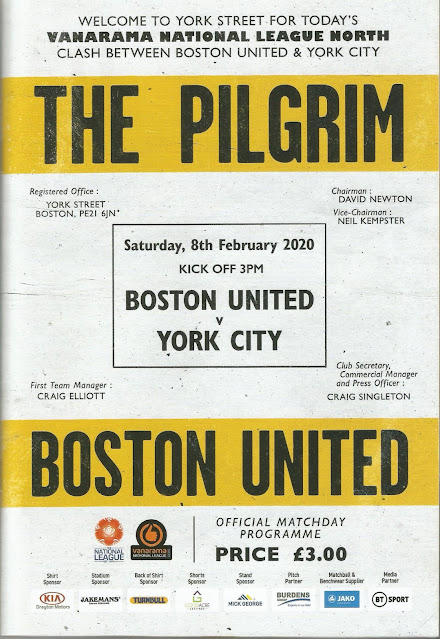 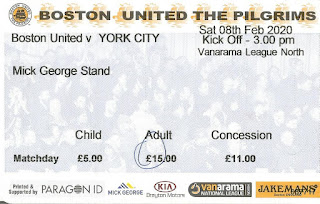 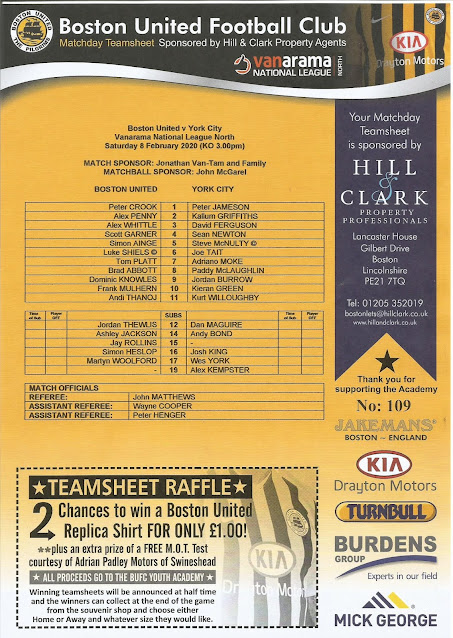