Munich is the capital and largest city of the German state of Bavaria, on the banks of River Isar north of the Bavarian Alps. Munich is the third largest city in Germany, after Berlin and Hamburg. The name of the city is derived from the Old/Middle High German term Munichen, meaning "by the monks". It derives from the monks of the Benedictine order who ran a monastery at the place that was later to become the Old Town of Munich; hence the monk depicted on the city's coat of arms. In 1175, Munich was officially granted city status and received fortification. The city was heavily damaged by allied bombing during World War II and was hit by 71 air raids over a period of five years. Munich is famous for its breweries and the Weissbier (or Weizenbier, wheat beer) is a speciality from Bavaria. Helles with its translucent gold colour is the most popular Munich beer today, although it's not old (only introduced in 1895) and is the result of a change in beer tastes. Helles has largely replaced the Munich Dark Beer (Dunkles), which gets its dark colour from burnt malt. It was the typical beer in Munich in the 19th century, but today it is more of a speciality. Starkbier is the strongest Munich beer, containing 6–9 percent alcohol. It is dark amber in colour and has a heavy malty taste. It is available and popular during the Lenten Starkbierzeit (strong beer season), which begins on or before St. Joseph's Day (19 March). The beer served at Oktoberfest is a special type of Märzen beer with a higher alcohol content than regular Helles. 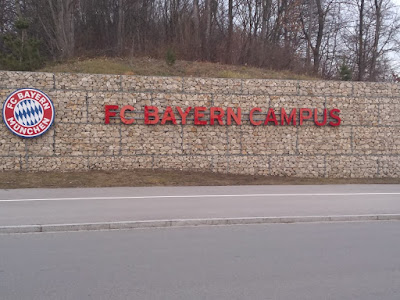 The FC Bayern Campus is a sports complex located in the north of Munich. It was built between 2015 and 2017 on the northern part of the Fürst-Wrede-Kaserne by the football club to create a central location for the clubs' youth teams. The construction costs amounted to €70 million. The campus has facilities for football, basketball, handball and table tennis, spread over an area of 30 hectares. The campus has 8 football pitches for youth teams from the U-9s to the U-19s and the women's and girls' teams. The Allianz FC Bayern Akademie is located on the campus site and the academy has 35 apartments for young talents who don't live in the Greater Munich area. The academy building also has offices for youth coaches and staff. It includes a stadium with a capacity of 2,500 for matches in Under 17 Bundesliga, Under 19 Bundesliga, DFB Youth Cup and the UEFA Youth League. 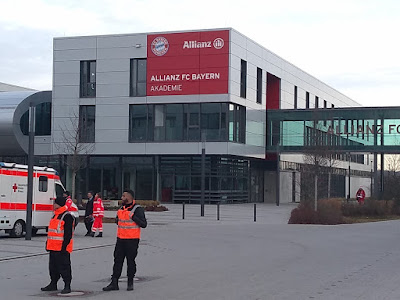 To reach the Campus by public transport from the city centre, you can take the U-Bahn line2, alighting at Harthof station. From here bus routes A41 and A70 will take you to Neuherbergstraße, which is 500 metres from the campus. The Fridge Magnet and I arrived at Harthof and were delighted to see one of these buses. However, a grumpy driver (probably the least helpful person I have encountered in Germany) waved us off his bus. It was actually heading in the wrong direction and it would be nice to think he was explaining this (his body language suggested otherwise). 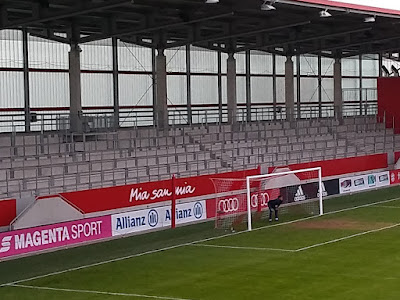 After a 25 minute walk we arrived at the campus. This impressive complex boasts all the previously described facilities and I was immediately struck by the professional nature of the place. The 2,500 capacity stadium is the main feature and shows what come be done if there is a will. The fully enclosed arena has spectator viewing facilities (fully covered) on three sides. Behind one of the goals is an area of terracing for standing, whereas the two remaining sides are seated. Only one of these sides was open for this match and by kick off time was reasonably full. A refreshment kiosk was open selling hot drinks and some typically German meat in a bun. 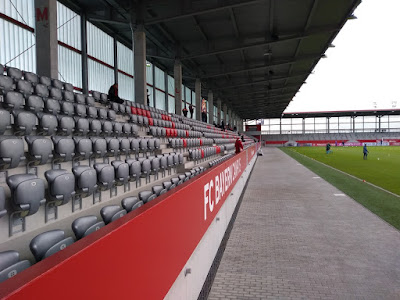 Bayern Munich had already beaten Spurs at Hotspur Way earlier in the season and had already qualified for the next stage of the competition. Spurs could still qualify but had to better the result of Crvena Zvezda who were playing Olympiacos. Accordingly, even a win might not be sufficient to progress. 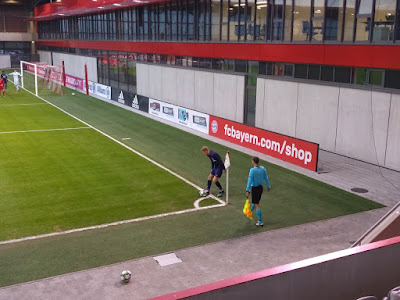 A header in each half from Flavius Daniliuc and Bright Akwo Arrey-Mbi put Bayern Munich in control and Angelo Stiller's strike from the edge of the box wrapped it up for the hosts on 74 minutes. The latter effort was most impressive and all three goals were followed by a loud rendition of the can-can over the public address system (this experience was repeated later in the evening at the Allianz Arena). 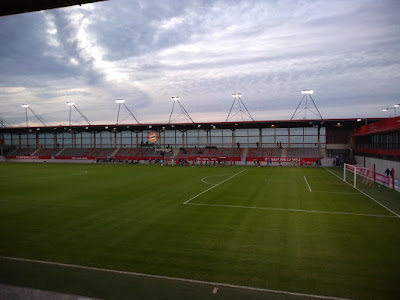 The young Spurs side had a brief spell where they were on top in this match, although already trailing 2-0. If they had scored from the number of chances they had, there might have been a different outcome. Overall though, the hosts were worthy winners.  This tournament runs parallel with the Champions League Group Stage and offers youth sides the opportunity to travel and play clubs from other countries. A positive initiative from UEFA – not often I find myself thinking that! 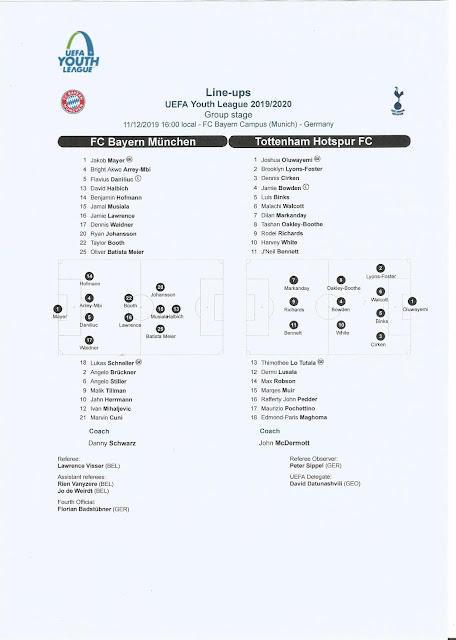