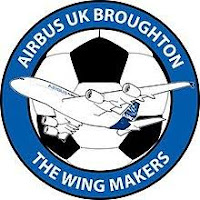 Broughton is home to a large aircraft factory at Hawarden Airport. This was completed in 1939 for use by Vickers Armstrongs, who built 5,786 Wellington bombers. De Havilland Aircraft took over the factory in 1948 and built 2,816 planes of several designs. Today, the plant is the Airbus wing factory, manufacturing wings for the A320, A330/A340, A350, and A380 aircraft. Airbus wings produced in Broughton are flown out in Airbus Beluga planes with the exception of the large A380 wings, which are transported by barge along the river Dee to the nearby Mostyn docks. The Broughton factory was featured in the 2011 BBC Television programme How to Build a Super Jumbo Wing. The ITV1 drama series, Midsomer Murders has used Broughton as a filming location. Broughton war memorial institute is situated on the main road opposite entry to Broughton hall road, this building was built in lieu of a memorial stone to commemorate the sacrifice by residents of the village in military conflicts between 1914 and 1919, to hosts groups and events for the benefit of local people year round. 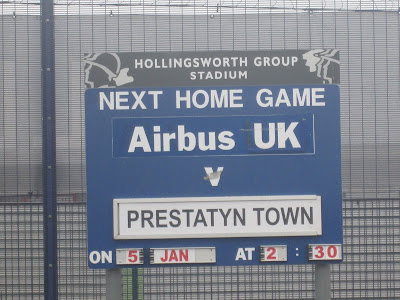 The football club was formed in 1946; the club has known several different names as the ownership of the factory has changed over the years. Originally called Vickers-Armstrong, it has variously been named de Havillands, Hawker Siddeley, British Aerospace and BAE Systems. The club's early years were spent in the Chester and District League and the Wrexham area leagues. The club won the Welsh National League (Wrexham Area) Division Two title during the 1991–92 season, when they won 28 of their 34 matches and scored 130 goals to finish 19 points ahead of their nearest rival. After four years in the Premier Division the club was promoted to the Cymru Alliance at the end of the 1999–00 season. At the same time the club changed its name to Airbus UK. In 2003–04 the club earned promotion to the top level of Welsh domestic football for the first time. The 2016–17 season produced only five wins and saw first round exits from both the League Cup and Welsh Cup, ending with the Wingmakers finishing in bottom place and being relegated back to the Cymru Alliance ending 13 seasons in the Welsh top flight. 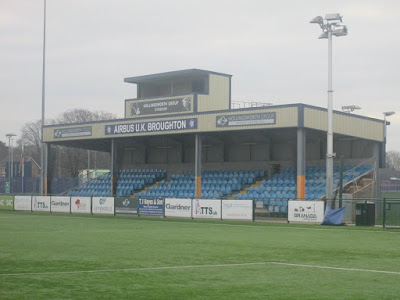 With the Tranmere Rovers v Tottenham Hotspur FA Cup tie being switched to the Friday evening for TV broadcasting, I was able to take advantage of the opportunity to visit a new venue in the vicinity the following day. To reach The Airfield by public transport is relatively straightforward. There are a number of frequent bus routes connecting Chester and Broughton with routes 4 and 12 stopping directly outside the ground. 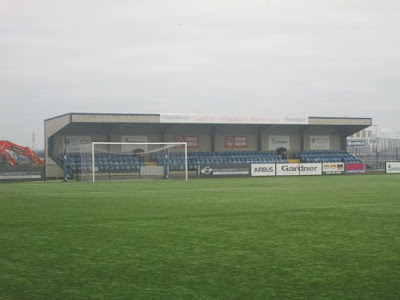 On arrival at the ground, which is situated within the vast Airbus complex, I was able to go inside and take some photographs. The extremely helpful club official (Steve) that I met, was clear that although it is ok to take pictures of the football ground, it is not permissible to photograph the airfield runway and associated structures. There is a company social club across the road from the ground and prior to the match I went there for a pint (no real ale so opted for Guinness) and was able to watch some televised FA Cup football. The ground boasts an artificial playing surface, one of a number I have seen in Welsh football. Along one side of the pitch is the main club building which houses the changing facilities along with a boardroom/sponsor’s lounge. In front of this building is a small covered seated stand. Also along this side is an extremely well stocked club shop and a refreshment trailer, serving hot drinks, burgers etc. 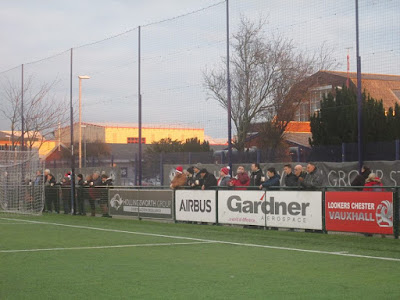 On the opposite side of the pitch is a larger covered seated stand and yet another stand (also seated and covered) is situated behind the end of the ground that backs on to the airfield. The remaining end of the ground is where the turnstile entrance is located, but there are no further spectator facilities. 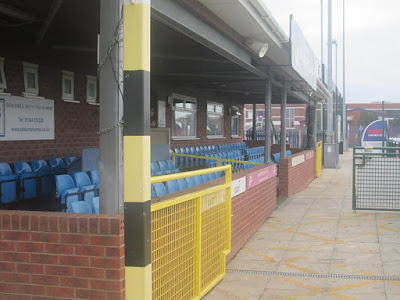 This match saw top of the table Airbus host twelfth placed Prestatyn Town. The visitors were well supported and those that had made the trip from the coastal town were rewarded when Prestatyn took the lead in the first period. An equaliser early in the second half looked to pave the way for another home victory. However, the visitors claimed all three points following the second goal capping a battling performance against the team favourites to win the league. The winning goal was adjudged to have crossed the line by the assistant referee. Not a popular decision for some but this Pieman saw it the same way and believe he got it right. A bus within ten minutes of the match ending meant I was back at Chester station just after 5pm with plenty of time to catch my connection to Crewe. 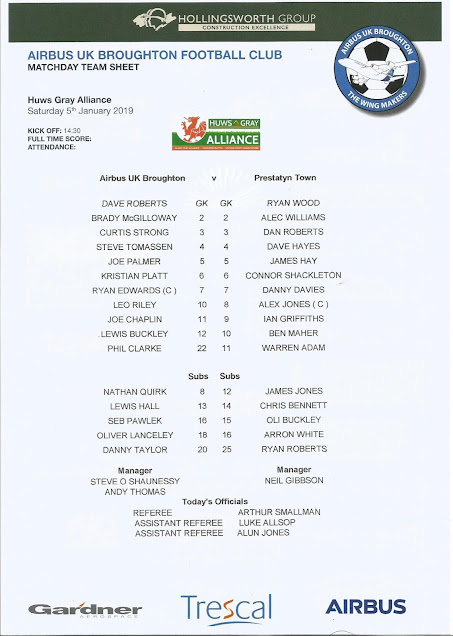 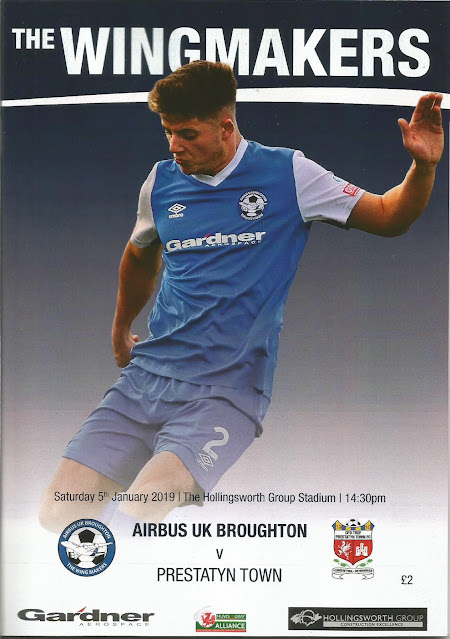