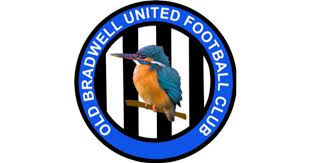 Bradwell is an ancient village and modern district in Milton Keynes, Buckinghamshire. It has also given its name to a modern civil parish that is part of the Borough of Milton Keynes. The village was adjacent to Bradwell Abbey, a Benedictine priory, founded in 1155 and dissolved in about 1540, but the abbey and its immediate environs were always a separate ecclesiastical parish. The village name means broad spring. In the Doomsday Book of 1086 the village was recorded as Bradewelle. 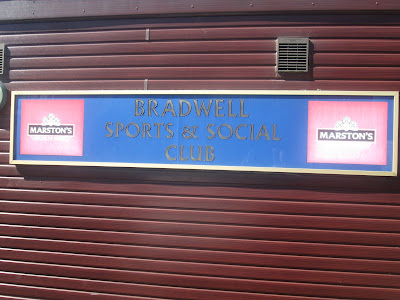 The football club was formed around the late 1920s. Membership of the North Bucks League began in 1930, with a visit to Potterspury and a 5-2 defeat. That first season proved to be very tough and the club finished last of fourteen. The first victory, 5-2 at Paulerspury came in November, but only five points with two victories and one draw were gained during that initial season. Having previously suffered relegation, League success was achieved by winning Division Two in 1937/38, but the Second World War halted further progress. Despite the Club re-entering the North Bucks League after World War II, for a number of years, there are no records of their performances. Eventually, the Club again withdrew from the League, but were re-admitted in 1965. South Midlands League membership was approved and season 1995/96 began with a home fixture v Cranfield United and a 6-4 defeat. Merger with the Spartan League was to follow. The 2018-19 season saw the club win both the Spartan south Midlands League Cup and the Berks & Bucks Senior Trophy. 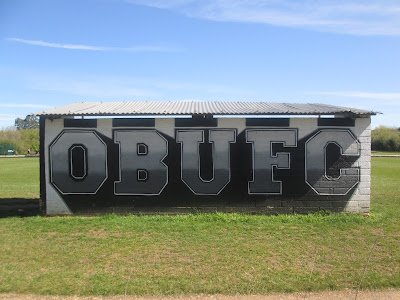 Although the government has allowed football to restart following the widespread disruption caused by the Covid pandemic, it is not straightforward finding a match that you are allowed to watch. Effectively you are restricted to public parks and recreation grounds. The Spartan League Division Two Spring Cup is a competition introduced to provided competitive football for participating clubs. Some of the venues fit the bill and so it was that I visited Bradwell Sports & Social Club. 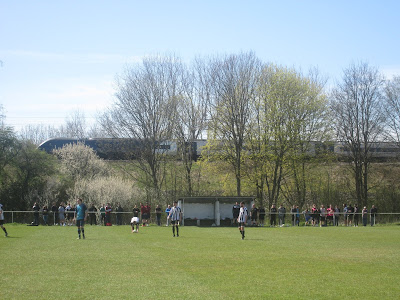 This venue is shared with cricket and there is also a bowling green as part of the wider complex. The railway overlooking the football pitch is the West Coast mainline. Accordingly, travellers from London Euston can quickly glimpse some Spartan South Midlands fayre of facing the right way! The Social Club refreshment facilities were not in operation before the match, but later on it was possible to obtain bottles of beer. A groundhopper from Worthing rather proudly purchased the last bottle post-match. 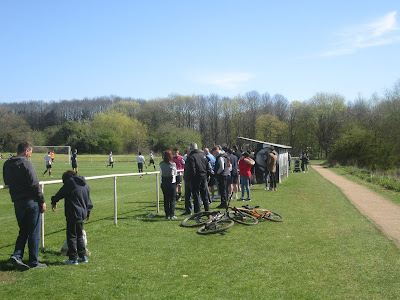 Most of the playing area is surrounded by a rail. The exception being the side overlapping with the cricket field which was taped off. The opposite side of the pitch contains the adjacent dug outs which have been nicely decorated with the club initials and crest. Behind here is a small river at the bottom of the railway embankment. A long pole with a large net is a permanent fixture for the retrieval of footballs! 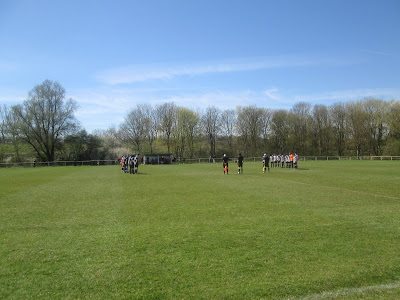 Both sides had won their opening fixture in the group the previous Saturday and with the sun shining on a lovely warm afternoon, those assembled looked forward to this derby match. It was the visitors that took the lead from the penalty spot on 6 minutes. The home side levelled just 3 minutes later through Toby Cribb and the remainder of the half saw both sides create further chances without the end product. 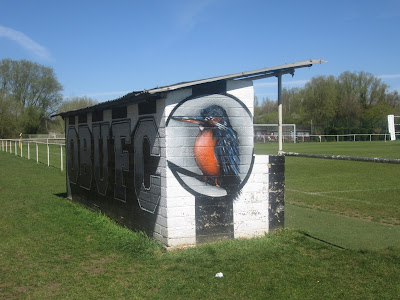 The second period followed a similar pattern, but neither side were able to convert the chances that came their way, despite some incisive attacking play at times. Both teams now have four points from their two matches and head the group. This was the first match I had attended since 19 December and it was good to get out in the fresh air to enjoy the experience at a lovely setting.

Attendance: 92
Admission: Not applicable
Programme: Not issued
For a full set of photographs click here