Diss is a market town and electoral ward in South Norfolk, close to the county border with Suffolk. The town lies in the valley of the River Waveney and takes its name from dic an Anglo-Saxon word meaning either ditch or embankment. Opposite the 14th-century parish church of St. Mary the Virgin stands a 16th-century building known as the Dolphin House. This was one of the most important buildings in the town. Its impressive dressed-oak beams denote it as an important building, possibly a wool merchant's house. Formerly a pub, the Dolphin, from the 1800s to the 1960s, the building now houses a number of small businesses. Adjacent to Dolphin House is the town's market place, the geographical and social centre of the town. The market is held every Friday (except Good Friday and other holidays, when it is rescheduled to the preceding Thursday): a variety of local traders sell fresh fruit and vegetables, meat, fish and cheeses. The market was first granted a charter by Richard the Lionheart. The town's post office and main shopping street (Mere Street) are also located by the marketplace. A railway journey from London to Diss is the subject of a poem by the late Sir John Betjeman: "A Mind's Journey to Diss". He also made a short documentary film in 1964 entitled Something about Diss. 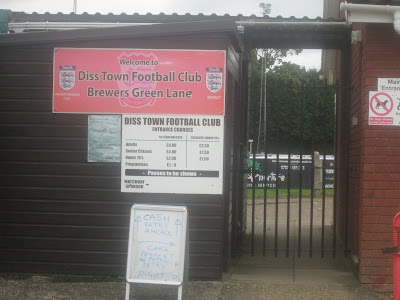 The football club was established in 1888 following a suggestion from the local cricket club, with whom the football club initially shared the ground on Roydon Road. In 1892 the club won their first trophy, the Norfolk Junior Cup, beating the Great Yarmouth Town second team in the final. In 1906 Diss joined the Norwich and District League. In 1935 they moved up to the Norfolk & Suffolk League, and were runners-up in 1955–56. They won the league cup the following season, and again in 1960 and 1961. In 1964 the club were founder members of the Anglian Combination, winning Division One in 1967–68 (also winning the league cup) and again in 1973–74. In 1975 Diss won the Norfolk Senior Cup, beating St Andrews 3–2 at Carrow Road. In 1975–76 they finished as league runners up and league cup winners. In 1976–77 they won the Premier Division, and won it again in 1978–79. In 1980 and 1982 the club won the league cup again. During the 1983–84 season Diss moved to a new ground at Brewers Green Lane, and in 1988 became founder members of Division One of the Eastern Counties League. After finishing third, sixth and fourth, they won Division One in 1991–92 and were promoted to the Premier Division. In 1993-94 the club won the FA Vase in front of a crowd of 13,450 at Wembley, beating Taunton Town 2–1 after extra time, following an injury time equaliser. 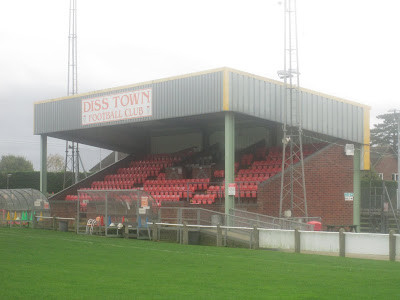 The journey by train was made from Cheshunt via Cambridge and Norwich. I used a discounted (£5:00) rail voucher (thanks again Martin). On arrival at Diss, the opportunity was taken to explore the magnificent town centre. From the railway station it takes around 15 minutes to walk and it is worth the effort. Many of the buildings are from a bygone era and very few are of similar design in respect of both size and shape. The central feature of the town is a picturesque mere, which attracts wildlife and visitors. The street and roads fit in with the fine quirky buildings, one of which is the Saracens Head public house. In order to satisfy both curiosity and thirst at the same time, this Pieman entered this established enjoying Adnam’s Ghost Ship and Woodforde’s Wherry, along with a super meal of haddock (from Lowestoft), chips and peas. 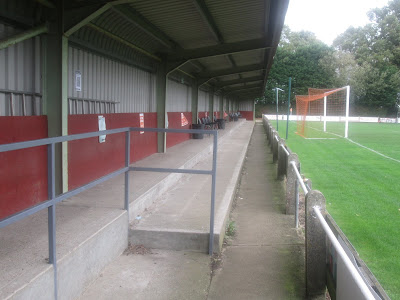 The walk from the centre to the football ground takes a little over ten minutes along a pleasant residential road. Brewers Green Lane is not paved in the lead up to the ground but this is only for a short distance and it is not long before you reach the car park and the entrance. The entry turnstile is located at the far left of the car park and a friendly welcome was enjoyed on entry. The majority of the club buildings are situated on the side. There appears to be a club shop in a cabin, but this structure was in use as additional changing facilities during the pandemic. 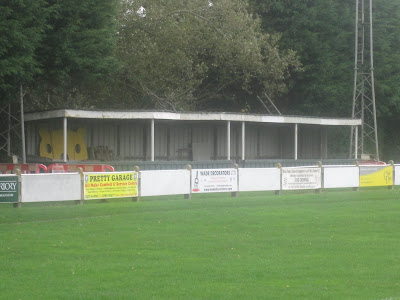 The main club house building is modern in appearance and contains changing facilities and a spacious bar and refreshment area. Almost adjacent is the covered seated main stand where the steep steps offer an exceptionally good vantage point to view the match. On a blustery day this was my refuge for the match. The oxtail soup went down a treat too. For almost the full length of the area behind one of the goal is another covered area containing a couple of steps of shall terracing. The opposite end of the ground offers no additional spectator facilities and backs onto residential housing. 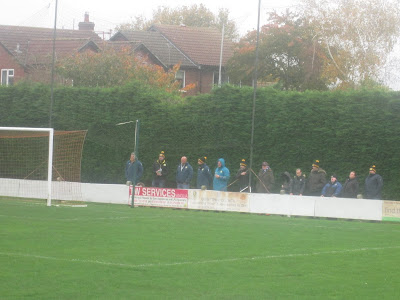 The remaining side of the ground boasts another smaller covered structure, which was out of bounds today due to the restrictions. Some very tall trees are decent protection from adverse weather and also assist in keeping footballs within the ground. This match saw visitors March Town United look to continue their good run of form this season (18 points from 7 matches) against a home side that had won all of their midweek matches but had failed to win on a Saturday! The first half an hour saw neither side play particularly well on what could be described as a bobbly pitch, but by the break, March had started to show why they were sitting third in the table and had created a few chances. 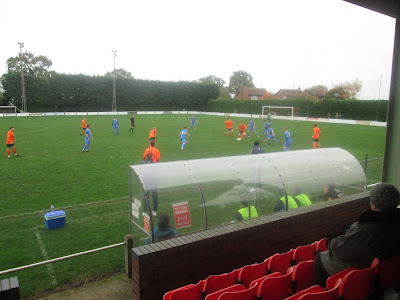 The visitors continued their improving form in the second period and a brace from striker Jack Friend proved to be enough for March Town United to take the three points back to Fenland. It was only after they conceded the second goal that Diss played their best football of the match and seemed to grow in confidence, almost scoring on a couple of occasions. The walk back to the station was followed by decent connections to Norwich, Cambridge North and ultimately Cheshunt. Diss is a lovely place to visit – Phil Tuson was spot on about that. 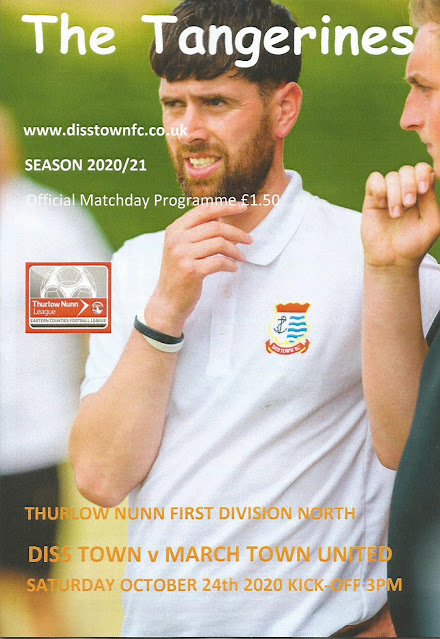