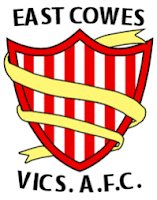 East Cowes is a town and civil parish to the north of the Isle of Wight, on the east bank of the River Medina next to its neighbour on the west bank, Cowes. The two towns are connected by the Cowes Floating Bridge, a chain ferry operated by the Isle of Wight Council. East Cowes is the site of Norris Castle, and Osborne House, the former summer residence of Queen Victoria and Prince Albert. The Prince had a major influence on the architecture of the area, for example on the building of St Mildred's Church in nearby Whippingham, which features distinctive turrets imitating those found on a German castle. During the reign of Queen Victoria, East Cowes was the subject of planned estate of grand houses, groves and parks. The scheme, not finding the finances it needed, was folded, but a few residences built in the early stages still survive to this day such as the former Albert Grove residences of Kent House and Powys House on York Avenue. Southern Vectis operate bus route 4 linking the town with Ryde and bus routes 5 and 25 linking the town with Newport including intermediate villages. 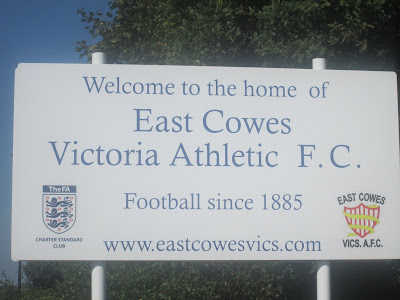 The Football club was established in 1885, taking the Victoria part of the name from the fact that their Beatrice Avenue ground is on the area owned by Osborne House. The club was founder members of the Isle of Wight League in 1898, and won the league in its inaugural season. Retaining the league title the following season the club went on to win the league again in 1930–31, 1934–35 and 1935–36. In 1947 East Cowes moved up to the Hampshire League. The 1985–86 season saw East Cowes win the Division One title for the first time. After retaining the title the following season, the club moved up to the Wessex League. The club won the Wessex League Cup in their first season in the league. They finished bottom of the league in 1999–2000 and were relegated back to the Hampshire League, becoming members of its Premier Division. They were runners-up in 2001–02, and in 2004 the Hampshire League merged into the Wessex League, with East Cowes becoming members of Division Two. The Division was renamed Division One in 2006. 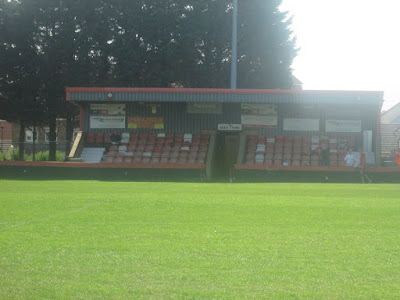 Despite the best efforts of the National Union of Rail, Maritime and Transport Workers, their industrial action was merely a hindrance. I was able to catch a train to Portsmouth Harbour in order to connect with the 10:15 Wightlink sailing to the Isle of Wight. The crossing only takes 22 minutes and before long my cousin had collected me from Ryde Pier. This facilitated a long overdue visit to see my aunt, who is currently in a residential care home. After a good catch up with her, it was on to the Chequers at Rookley where I enjoyed a fish finger doorstep sandwich washed down with a nice pint of Islander (4.0%) from Yates’ Brewery. This ale is brewed with Goldings & Chinook hops. 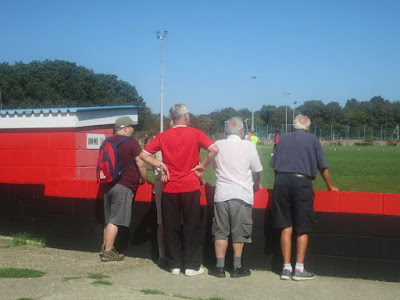 I was then driven to Beatrice Avenue in plenty of time for the match. There was a friendly atmosphere at the ground, although a number of the home supporting regulars were expressing surprise that there were so few in attendance. Clearly the numbers have been greater recently for league matches. I believe it fair to describe the ground as basic, but it still had a rustic charm that appealed to this Pieman. 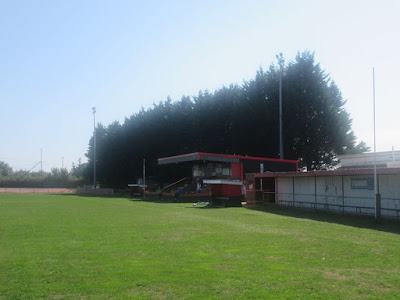 There is a covered seated stand that straddles the halfway line. This is dissected by the tunnel to the changing rooms, which are at the rear of this structure. Additional to this, along the same side of the ground, is another covered area containing a continuous long bench. This area will predate the current main stand and the view from some of this area is obscured by one of the dugouts. There is also a clubhouse with both a licensed bar and snack bar facilities 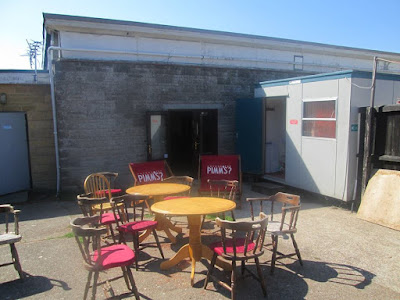 Visitors Pewsey Vale started this match the strongest and looked likely winners when taking a two-goal lead, having been thwarted by some resolute defending on other occasions. However, a goal for the home side just before the break, signalled that the islanders were not about to throw in the towel. A leveller early in the second period underlined this point and the match started to swing in favour of the Vics. Not for long though, as the visitors regained their lead following a counter attack and could have further added to their tally. Another equaliser for the Vics with around ten minutes of the match to go looked to have provided those assembled to an additional treat of an additional 30 minutes extra time.

In the closing minutes of the match I was joined by my other island based cousin who had arrived to give me a lift back to Ryde. As we stood by the corner flag I explained that extra time was likely. At this point, a corner from in front of us was curled into the box and struck home. The home side was ahead for the first time in the match. An exciting finale to an entertaining match. I was back at Ryde with plenty of time to catch the 17:43 sailing, connecting with the 18:17 service to London Waterloo. A quality day out on Vectis! 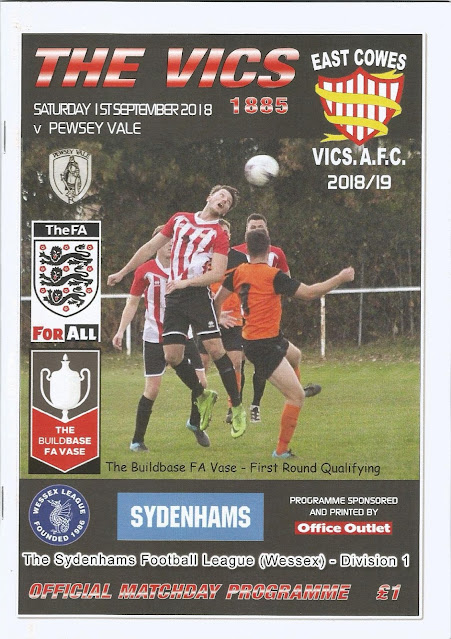