During World War II Dumbarton was heavily bombed by the German air force. The Germans were targeting the shipyards, and the area in the vicinity of the yards was consequently hit, with Clyde and Leven Street being severely damaged. In an attempt to lure the German aircraft away from the shipyards, decoy lights were routinely placed on the Kilpatrick hills above the town, lights were set out on reservoirs to mimic those of the shipyards reflecting on the waters of the Leven and Clyde, this was sometimes successful in diverting the bombers and many bombs fell harmlessly onto the moors and lochs. From the mid 1700's to the early 1800s Dumbarton's main industry was glassmaking. As the glass industry declined the town became a major centre for shipbuilding and remained so well into the 20th century. There were many shipbuilding yards, although a number of them were later absorbed by larger yards. A great many ships were built in the town, the most famous of which is probably the Cutty Sark which was built by the Scott & Linton yard. She was one of the final 'tea clippers' to be built and one of the fastest.


This was the 3rd leg of my epic 3 matches in less than 48 hours in Scotland. It had started with a Friday night trip out to Coatbridge to watch Albion Rovers take on the emerging Gretna and was followed by a Saturday lunchtime encounter between Stranraer and Peterhead. This adjustment to the fixture list was caused by Scotland taking on Holland over 2 legs in a European Championship Qualifying Play-Off. The stadium has a capacity of 2025, and was built in 2000 after the move away from Dumbarton's traditional home, the wonderful Boghead Park visited by the Pieman in 1996. The stadium is a one-stand affair, opened in December 2000. Apart from this Pieman, Airdrie United were also making their first visit to the Strathclyde Homes Stadium. However, I did have a problem with the Dumbarton mascot, a ridiculous looking elephant, who after me finding a superb seat proceeded to block my view.


I was able to move seats but this elephant also had an altercation with the Airdrie left back and was clearly a pest. As was the case for Boghead Park, Dumbarton East is the nearest railway station, being no more than 10 minutes walk from the Stadium. Having enjoyed a few pints the previous day in Stranraer, I settled for just the one at the Stags Head, a decent pub opposite the railway station. Even on a Sunday there is a regular train service and after the match it was not long before I was on my way back to Glasgow in order to catch the connection to the airport for my flight to Stansted. 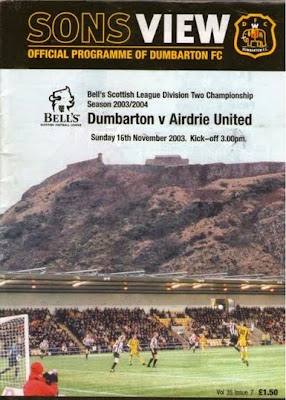