Arkley is a village in the London Borough of Barnet. It consists of a long village strung out between Barnet and Stirling Corner, roughly centred on the "Gate" pub, and composed of the ancient hamlets of Barnet Gate, Rowley Green and Arkley. It is located 10.6 miles north north-west of Charing Cross. The origins of the name Arkley are unclear; it is first recorded as Arkleyslond in 1332. The name Arkley appears to mean "woodland clearing by the ark or by the place where arks (chest, bin or other wooden receptacle) are made. Arkley Windmill was in use by 1806. It is marked as "corn" windmill on the Ordnance Survey of the 1860s. From photographs, it appears to have had only two of its original sails by the 1890s, by which time it may have been powered by steam. It ceased to be a functioning mill during World War I, and was restored in 1930, but not as a working mill. 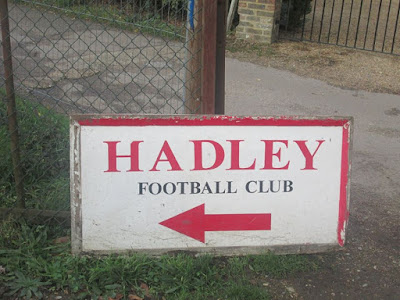 Hadley Football Club was founded in 1882 and started playing in the North Middlesex League. After the Second World War they joined the Barnet and District League and, from about 1947, played at Wrotham Park at the Barnet end of Kitts End Road. In the 1977–78 season the club joined the Hertfordshire Senior County League, starting in Division Three and winning that division in their first attempt. The club also moved grounds to enable them to progress to the Herts Senior County League and moved to a pitch with better facilities in St. Albans Road, Barnet. The club stayed in this league until 1985 when they joined the Southern Olympian League and moved grounds again to play at the Woodside Park Club, Southover, Totteridge. The club moved grounds again in 1992 to Brickfield Lane in Arkley, Barnet and re-joined the Herts Senior County League in the 1999–00 season. The club joined the Spartan South Midlands League, and the club was accepted into Division Two for the start of the 2008–09 season. The club gained promotion to Division One in their first season and repeated the promotion process again a season later. 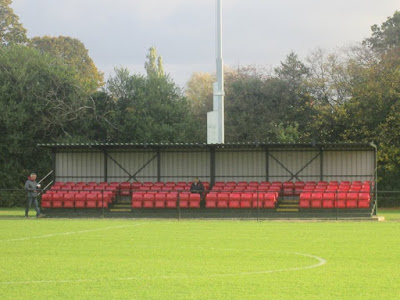 In recent seasons Hadley FC has been unable to use Brickfield Lane for home matches and had been groundsharing at Potters Bar Town FC. However, with the required ground improvements in place, they are now back at base. To reach the ground by public transport, it is possible to get a bus direct from either Potters Bar or Barnet. The bus route passes the end of the private road that is Brickfield Lane. I was fortunate to be offered a lift to this match and on arrival at the ground, having parked up, a refreshment opportunity was realised. The Gate public house is conveniently situated just across the road from the ground. This establishment was doing good trade and the Doombar was in good condition. Three handpumps in total, the other offerings being Abbot and IPA from Greene King. 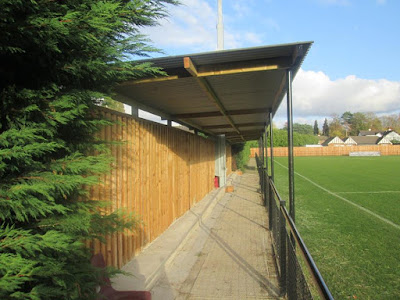 I believe it is fair to say that this venue is still a work in progress but the club is to be congratulated on what has been achieved so far. The main club building sits back from the playing venue and houses the changing facilities, the boardroom and refreshment area. It was here that we opted to sample the rather large hot dogs on offer just as you enter the building. Our Polish correspondent Kevin Morris is often featured on social media with a large sausage and this Pieman pulled of a coup by persuading Tottenham Hotspur legend and current Hadley FC manager Micky Hazard, to pose in similar fashion.


The revamped venue has concrete hardstanding around the entirety of the pitch. Along the side where the dugouts are situated is a covered seated stand. On the opposite side of the pitch is a covered two step terrace, which although basic in appearance, affords an excellent view of proceedings. There are conifers situated along this side of the pitch which along with the more established trees behind one goal and those further back near the road, give the ground an enclosed feel. For a relatively small venue there appears plenty of car parking available immediately outside the clubhouse and a larger area just beyond. 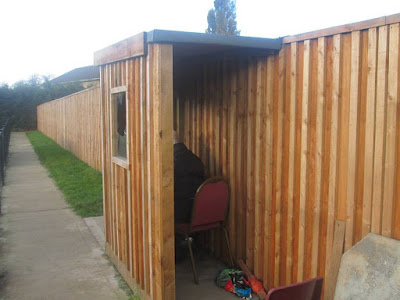 The move back to this venue has encouraged visits from groundhoppers and it was good to catch up with Luke, Lee and Bob. On a progressively chilly afternoon, despite the bright sunshine, we opted to watch the match from the covered terrace as this was the least windy, thus warmer, part of the ground. A competitive match ensued with the home side leading before conceding a penalty. From where I was standing I thought the resulting red card was extremely harsh and did affect the rest of the match. Yellow at best was this Pieman's verdict and possibly not even that. However, referee Kennedy Kikulwe decided otherwise. 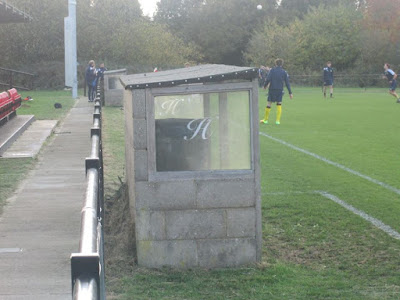 Ten men Hadley were up against it for the majority of the second period. Their goalkeeper was superb and it is to his credit that Hertford only scored once. Hertford are a form team at the moment and this victory lifted them to 3rd in the table with four games in hand on leaders London Colney who are fourteen points ahead. This match ended just before 5pm and I think Mr Kikulwe may be in need of a new watch for Christmas as this was excessive. However, this fine November 5th afternoon perhaps deserved an encore and with Micky Hazard, Giant Hotdogs and Sussex Hopper, who needs fireworks?