Archaeology has shown that Ware has been occupied since at least the Mesolithic period (which ended about 4,000 BC). The Romans had a sizeable settlement here and foundations of several buildings, including a temple, have been found. A well preserved Roman skeleton of a teenage girl has been found as well. Ware was on Ermine Street, the Roman road from London to Lincoln. The modern name of the town dates from the Anglo-Saxon period when 'weirs' were built to stop the invading Vikings from escaping in their longships after defeat by Alfred the Great in a battle near Ware. In the Doomsday survey of 1085 it was the second largest town in Hertfordshire. It was also a great coaching town, being on the Old North Road, less than a day's journey from London. Mary I had Thomas Fust burnt at stake in Ware for refusing to convert to Catholicism.  The Ware Mutiny occurred on 15 November 1647, between the First and the Second English Civil War at Corkbush Field, when soldiers were ordered to sign a declaration of loyalty to Thomas Fairfax, the commander-in-chief of the New Model Army (NMA), and the Army Council. When some with Leveller sympathies refused to do this they were arrested, and one of the ringleaders, Private Richard Arnold, was court-martialled and shot. In 1683, the Rye House Plot involved assassinating Charles II after he passed through Ware. It failed. In 1756 during the Seven Years War, £350 was paid to the inns and public houses of Ware for the troops staying with them. More recently on 17 January 1979, the £3.6m two-mile A10 bypass opened. At the north end of the bypass is the Wodson Park Sports Centre, with an athletics track

On a foggy freezing day, we did not fancy venturing too far and settled for a visit to neighbouring Ware FC. I had visited their previous Buryfield ground on a few occasions. I had a wander around the town and called in at the local museum for a while before making the ascent up the steep hill to Wodson Park. 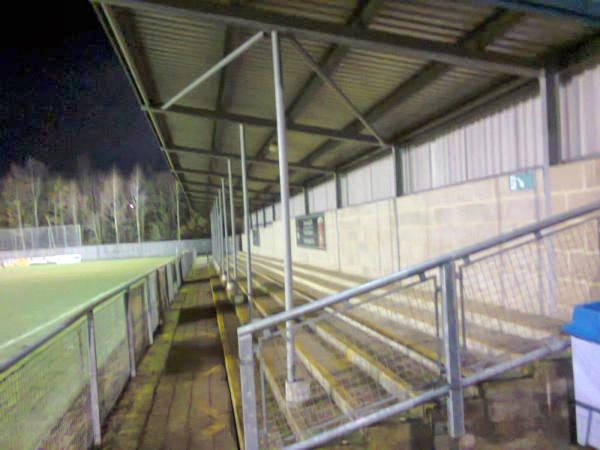 I took refuge in the clubhouse until the match kicked off. It was extremely cold but the players on both sides did very well in making it an entertaining match to watch. Table toppers Met Police were beaten by a mid-table Ware side that deserved the points.