Ashton-under-Lyne is a town within the Metropolitan Borough of Tameside, in Greater Manchester, lying under the Pennine hills, roughly seven miles east of Manchester City Centre. Although existing for centuries, Ashton grew rapidly in size during the 19th century due to cotton spinning and weaving, and coal mining. Today, Ashton is a predominantly residential town

My trip to Manchester for an FA Cup tie at the City of Manchester Stadium with an early Sunday kick-off facilitated a Saturday night stay at Stockport. Accordingly, the world of non-league football was again opened up to me with various options in the Manchester area. My travelling companions attended Stalybridge Celtic v Bradford Park Avenue. I am reliably informed that the pie, peas and gravy at that match was very good. I opted for Ashton United v Barrow (Att: 220) in the Unibond President's Cup Quarter Final. 120 minutes of good football thwarted by excellent goalkeeping brought about a penalty shoot out won by Barrow 4-2. Collectors of football memorabilia will be disappointed to learn that Steve Martin soon swooped for my match ticket ! 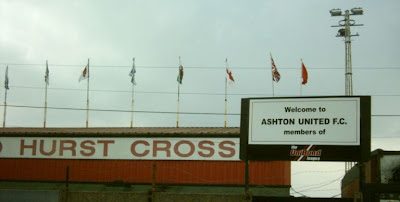 The Surrey Street ground in Hurst Cross ground is a 25 minute walk from Stalybridge station where I parted from the others. Ashton-Under-Lyme station is similarly close but the former has a better service with trains to both Manchester stations whereas the latter is only served by Victoria.

Real Ale enthusiasts should take the opportunity to visit the Station Buffet at Stalybridge. Apart from a superb selection of ales, there is some interesting railway memorabilia. The buffet is also decorated as to recapture the past and the open fire looked inviting on this visit. 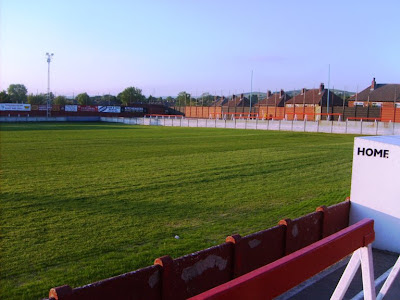 The ground is pleasant with covered accommodation on both sides (includes seated main stand) with uncovered terracing forming the remainder. Ashton were founded in 1878 and are clearly a club with a lot of tradition. 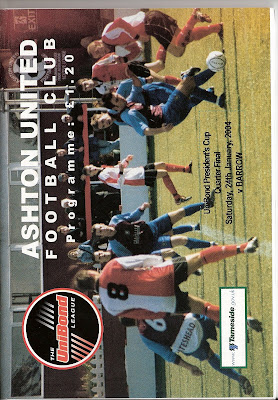