Langford is a village situated alongside the River Ivel in the county of Bedfordshire. The village is of Saxon origin and at one time it had one or more fording points across the river. The name is based on the words long ford from the length of the settlement. At the time of the Doomsday Book the population was around one hundred. Langford is three miles south of Biggleswade and has been a settlement on the east bank of the river Ivel since Saxon times.On the west side of the river Ivel is part of the Ivel Valley countryside project, namely, Henlow common and Langford meadows local nature reserve. This is a 47 acre reserve and despite its name, Henlow common is situated in Langford parish. It came to Langford in 1985 after an exchange of land between the two parishes, as a registered common it keeps its original name. Dams ditch, earlier called Adams ditch, runs through the middle of the reserve. It is more like a small river than a ditch. The village has grown enormously since 1961 when the population was 1,250;  housing estates were taking over the fields and meadows, so that by 1976 the population had doubled to 2,500 and in 2001 it was 4,000.

Forde Park is easy to find as it is adjacent to the through road to Biggleswade. It is possible to get a bus direct to the ground on the Hitchin - Biggleswade route. Another venue making good use of conifers, there is a wall around all 4 sides of the playing area and a recently installed 103 seater stand. The clubhouse is of a good standard and the refreshment kitchen is staffed by a number of lady volunteers - no need to go hungry at Langford!

Biggleswade United took all 3 points with a goal in each half. The first period was fairly even but by the end of the match the visitors had earned the win. The gentleman on the gate (25 years with the club) revealed himself to also be the volunteer responsible for marking the lines and is one of many unsung heroes at clubs like Langford. He will have seen many changes since first getting involved with his local club (centenary for Langford FC next year), a significant one being that whereas once upon a time the team was populated with local Langford lads, many now come from Stevenage and other locations to play. 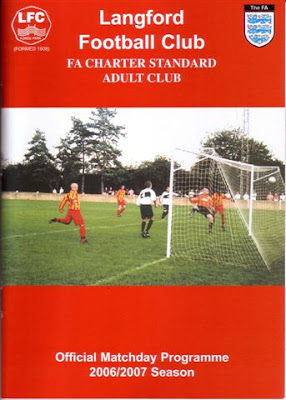