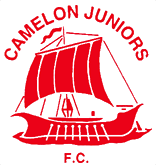 Camelon is a large village within the Falkirk council area, Scotland. It is in the Forth Valley, 1.3 miles west of Falkirk, 1.3 miles south of Larbert and 2.6 miles east of Bonnybridge. The main road through Camelon is the A803 road which links the village to Falkirk. Camelon was the site of a flight of locks, which joined the Union Canal with the Forth and Clyde Canal; this was replaced in 2002 with the Falkirk Wheel, a rotating boat lift. Camelon is the site of a series of Roman fortifications on the Antonine Wall. Mariners Day is an annual children fayre held on the second Saturday in June. It includes a parade, crowning ceremony of the Queen along with fun and games for the children of the area. Camelon has good access for a village of its size with Camelon railway station lying on the Cumbernauld Line and the Edinburgh to Dunblane line. Next to the station there are amenities including the Mariner Leisure Centre. Outside of the three 'senior' leagues in the non-league grade in Scotland, are the 'junior' leagues. Although called junior, this refers to the level of football played, not the age of the participants. The junior leagues are organised by the Scottish Junior Football Association and are regionalised into three areas, North, East and West. There is a Scottish Junior Cup, which all members of the association participate in, having done so since the Nineteenth Century. Camelon Juniors FC is a Scottish Junior football club based in Camelon. The club, founded in 1920, currently play in the Scottish Junior Football Association's East Region Super League after winning the Lothians League Division 1 in 2005–06. Prior to this match, this Pieman had never seen a Scottish non-league match let alone a match within the 'Juniors' structure. 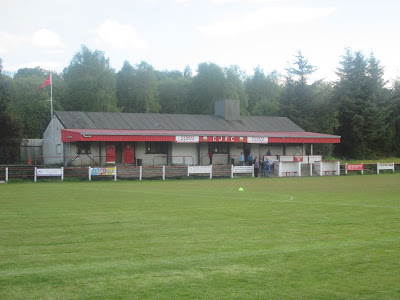 This Pieman had already booked an excursion to Glasgow in order to attend the Scottish Cup final at Hampden Park and was delighted to find that Camelon Juniors was scheduled to host Bo'ness United in the semi-final of the Fife & Lothians Cup on the Friday evening. The journey from Glasgow Queen Street to Camelon takes around 40 minutes. Whilst awaiting for the last train before peak services commenced, an opportunity was taken to visit The Vale public house opposite the station. At this establishment I enjoyed a pint of  Drop (a pale, hoppy session ale 4.2%) from the local Jaw Brew brewery. 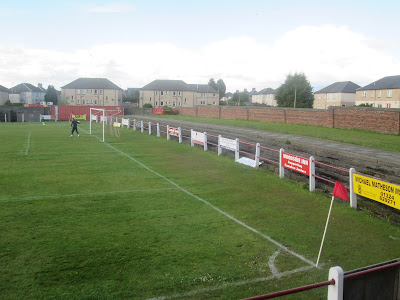 On reaching Camelon and in search of solid refreshment, it was good to be able to enjoy the buffet at a local Chinese restaurant. Many of the local shops were displaying Falkirk flags and scarves in support of the local team’s participation in the Scottish Cup Final the following day. Carmuirs Park is relatively close to the railway station, taking around ten minutes to walk. 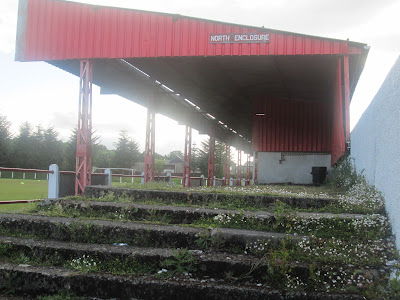 We were the first spectators to arrive at the ground and having paid admission and purchased raffle tickets, there was a good opportunity to wander around taking photographs. There is covered terracing on both sides of the pitch and further terracing behind one of the goals. The other end of the ground backs on to houses. In the garden of one house, an occupant has built his own covered grandstand from where he can watch the matches.

This match started with visitors Bo'ness United (second from top of the East Region Super League) forcing the play. When they took the lead they could easily have already been a couple of goals ahead. Therefore, it was a surprise, shortly before the break, that Camelon (closer to the bottom of the same league), levelled the score with a scrambled goal. 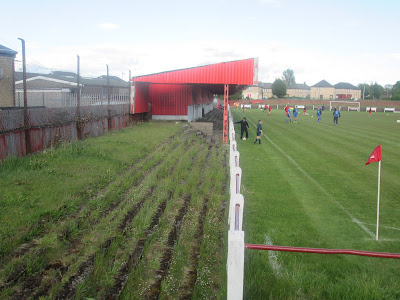 This uplift in fortunes galvanised the home side and some fine attacking play and determined tackling contributed to an entertaining second period where Bo'ness were blown away. The final result of 5-2 is a testament to the fine standard of football in this match and if typical is a tribute to the Scottish Junior scene. As the match had commenced at 19:15 it was just possible to catch the 21:17 service back to Glasgow. 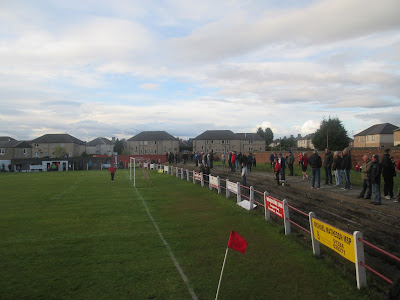