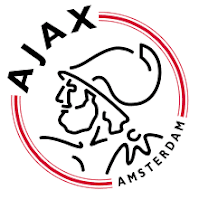 Amsterdam is the capital city and most populous municipality of the Netherlands. There is contention on this point and The Hague is also deemed to be the capital as it is the seat of the government. Amsterdam's name derives from Amstelredamme, indicative of the city's origin around a dam in the river Amstel. Originating as a small fishing village in the late 12th century, Amsterdam became one of the most important ports in the world during the Dutch Golden Age (17th century), as a result of its innovative developments in trade. During that time, the city was the leading centre for finance and trade. In the 19th and 20th centuries the city expanded, and many new neighbourhoods and suburbs were planned and built. The 17th-century canals of Amsterdam and the 19–20th century Defence Line of Amsterdam are on the UNESCO World Heritage List. Since the annexation of the municipality of Sloten in 1921 by the municipality of Amsterdam, the oldest historic part of the city lies in Sloten, dating to the 9th century. Amsterdam has more than 60 miles of canals, most of which are navigable by boat. The city's three main canals are the Prinsengracht, Herengracht, and Keizersgracht. 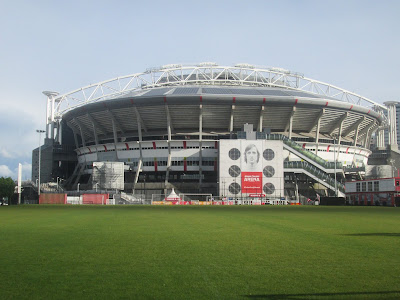 The football club was founded in Amsterdam on 18 March 1900. The club achieved promotion to the highest level of Dutch football in 1911 and had its first major success in 1917, winning the KNVB Beker, the Netherlands' national cup. The following season, Ajax became national champion for the first time. The club defended its title in 1918–19, becoming the only team to achieve an unbeaten season in the Netherlands Football League Championship. Historically, Amsterdamsche Football Club Ajax (named after the legendary Greek hero) has been the most successful club in the Netherlands, with 33 Eredivisie titles and 19 KNVB Cups. It has continuously played in the Eredivisie, since the league's inception in 1956 and, along with Feyenoord and PSV, it is one of the country's "big three" clubs that have dominated that competition. The club is one of the five teams that has earned the right to keep the European Cup and to wear a multiple-winner badge; they won consecutively in 1971–1973. In 1972, they completed the continental treble by winning the Eredivisie, KNVB Cup, and the European Cup. It also won the first organised UEFA Super Cup in 1972 against Glasgow Rangers (played in 1973). 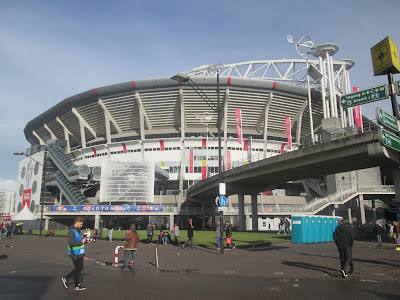 The Johan Cruyff Arena was built between 1993 to 1996 at a cost equivalent to €140 million, it is the largest stadium in the country. The stadium was previously known as the Amsterdam Arena until the 2018–19 season, when it was officially renamed in honour of legendary Dutch footballer Johan Cruyff after he died in March 2016. The stadium has a retractable roof and has a capacity of 54,990 for football matches (68,000 for concerts). The stadium hosts most of the Dutch national team's matches, though the Netherlands no longer has a dedicated national stadium for football. 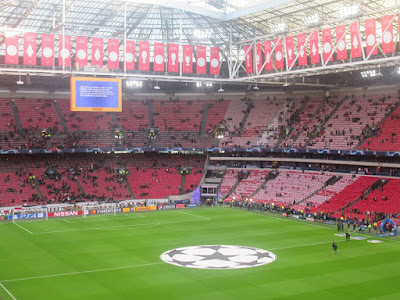 Always a popular tournament for travelling supporters, the UEFA Champions League intensifies as the tournament progresses. Accordingly, “every man and his dog” were heading to Amsterdam for this match. I opted to fly from Stansted to Eindhoven from where I caught a coach connection direct to Amsterdam. I was staying at Haarlem and it was fairly straightforward to catch a train there and I was able to enjoy a less crowded environment. 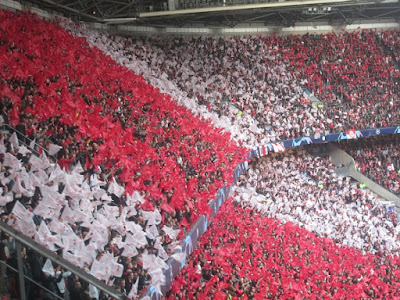 On matchday I was keen to avoid the busyness of the centre and along with a couple of likeminded individuals, I strolled out to a windmill (“in old Amsterdam”) which has been converted to a brewery and tap room. Brouwerij 't IJ has a fine variety of ales, the quality of which would certainly entice me back. The brewery was opened by Kaspar Peterson, a former musician, in October 1985 and was one of several small breweries that opened in cities around the Netherlands in response to consumers' dissatisfaction with beer brewed by the larger companies. Whilst there, I sampled Natte (6.5%), Zatte (8%) and IJwit (6.5%). 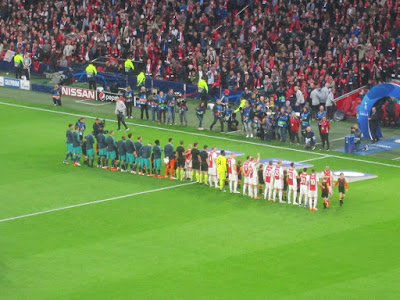 To reach the stadium by public transport, the easiest option is to catch either a train or the metro (Line 54) from Central Station. Train station Bijlmer ArenA lies next to the stadium and can be reached in 15 minutes from Amsterdam Central Station. There is very regular service. The metro takes only little longer and stops at the same station as well as station Strandvliet/ArenA that lies on the north side of the stadium. The latter stop is more convenient for visiting fans as their segregated area is at this end of the stadium. 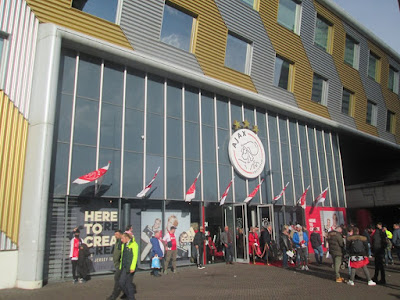 As is often the case with continental stadia, the outside of the ground is functional without possessing individual character. However, the design and semi-rural setting is nice. By contrast, the interior is impressive and for once (rarely the case in the Netherlands) opposition fans have a decent view! I’m sure all connected with Ajax will be proud of the stadium, something they craved for many years. This particular match saw the home side add two goals to their 1-0 lead from the 1st leg in London. This was harsh on Spurs but at this level you have to expect mistakes to be punished. Amazingly the tie was turned on its head courtesy of a superbly committed Tottenham Hotspur fightback, the icing on the cake being a hat-trick by Lucas Moura. The final goal was scored in the final phase of time added on, resulting in Spurs qualifying for the final on away goals. 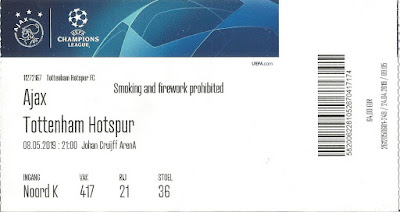