Bolton's position on the west of the Pennines provides a damp climate. It is this feature which probably led to Flemish weavers, fleeing the Huguenot persecutions in the 17th century, to eventually settle here, as moisture-laden air allows for the spinning of cotton with little breakage. The cotton industry was to provide the catalyst for the town's expansion between the 14th and 19th centuries. Large, steam-powered textile mills eventually dominated the town's skyline, providing the major employment and defining the rhythm of the working week, so much so that an annual shut-down for maintenance in late June became the Bolton Holidays. There were also some large iron foundries in the town as well as other engineering works, many connected with the cotton industry. In recent times, the town has swapped much of its heavy industrial machinery for service-based activities including a large number of data processing and call centres and also hi-tech electronics and IT companies. 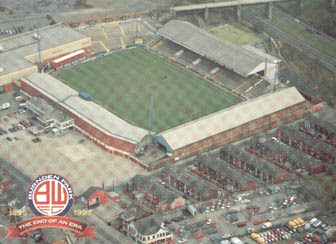 My first visit to Burnden Park for what was a top of the table, 2nd tier fixture. Prior to relegation the previous season, Spurs had enjoyed a long uninterrupted spell in the top flight. Opponents, Bolton Wanderers were keen to re-establish top flight status after many years in the lower divisions. Nat Lofthouse had long stopped playing and the days when Wanderers were one of the country’s top sides were in the past.

I had travelled on one of the special trains chartered by Spurs Supporters Club and within 10 minutes of arriving at Bolton, the police escort had taken us to the turnstiles. We stood in the uncovered end of the ground and the large London element of the 32,266 crowd where given false hope when a long range Neil McNab strike was ruled out for offside against another player. Both teams gave their all with Wanderers taking the points courtesy of a solitary goal. 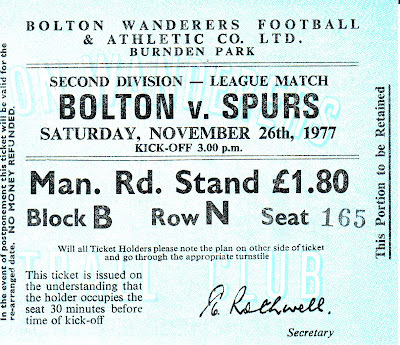 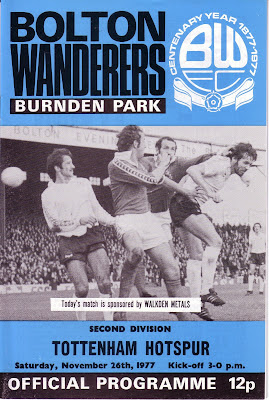 Total visits to this venue = 5