The earliest settlements in the Luton area were at Round Green and Mixes Hill, where Palaeolithic encampments (about 250,000 years old) have been found. Settlements re-appeared after the ice had retreated in the Mesolithic around 8000 BC. Traces of these settlements have been found in the Leagrave area of the modern town. Remains from the Neolithic (4500-2500 BC in this area) are much more common. A particular concentration of Neolithic burials has been found at Galley Hill. The most prominent Neolithic structure is Waulud's Bank - a henge dating from around 3000 BC. From the Neolithic onwards, the area seems to have been fairly thickly populated, but without any single large settlement. During the English Civil War of the 17th century there were two significant incidents in Luton. In 1645 royalists entered the town and demanded money and goods. Parliamentary forces arrived and during the fighting four royalist soldiers were killed and a further twenty-two were captured. A second skirmish occurred three years later in 1648 when a royalist army passed through Luton. A number of royalists were attacked by parliamentary soldiers at an inn on the corner of Bridge Street. Most of the royalists escaped but nine were killed. Kenilworth Road is an easy venue to reach being within walking distance of the railway station and town centre. This particular match was scheduled for Saturday 18th February but was postponed that morning and rescheduled for the following Wednesday. This Pieman and one or two others attended Arsenal v Walsall on the Saturday afternoon. The ground is perhaps one of the oddest looking in the Football League and this is evident from these photographs. For the record Spurs put on an impressive display winning 4-1 with goals from Glenn Hoddle, Don McAllister and John Duncan in front of many Londoners among the 17,024 crowd. 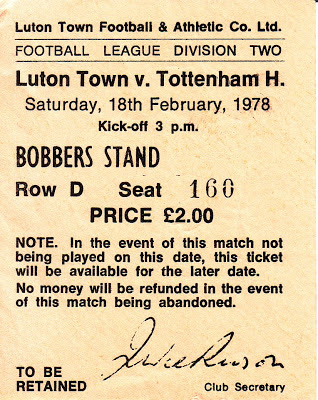