Mansfield is a town in Nottinghamshire, England. It lies on the River Maun, from which the name of the town is derived. It is the main town in the Mansfield local government district. Mansfield is a conurbation with a total population of 158,114 inhabitants. Outside of the main town, the rest of the Urban Area's population live in the neighbouring boroughs of Bolsover, Ashfield and Newark & Sherwood. Mansfield is well regarded as an area that has adapted well to change from the old traditional industries associated with the collapse of coal mining. The television and radio presenter Richard Bacon and professional golfer Oliver Wilson come from Mansfield. The singer Alvin Stardust lived there as a child.

In those days, Spurs Supporters Club chartered special trains and it was from London St Pancras that we set off for Alfreton & Mansfield Parkway. The special train was met by a fleet of double decker buses which took us to Field Mill. As the buses pulled into the large car park at the ground, it was already raining heavily. Although the travelling support had been allocated the terracing behind the goal, this was uncovered and standing in the pouring rain for a couple of hours was not on the agenda for this journalist and a few hundred other Spurs fans.

We managed to gain admission to the covered terrace immediately in front of the main stand. From here we were afforded an excellent view of the proceedings. The match was a classic old-fashioned battle in very muddy conditions. Mansfield Town will have been very pleased to secure their second draw of the season against Tottenham Hotspur and very nearly claimed victory. Mansfield had taken a 3-2 lead late in the game when Barry Daines raced out of his goal and completely missed his kick. Glenn Hoddle saved a point for Spurs with a trademark free kick in the last seconds. His earlier penalty and a Chris Jones strike making up the tally for the visitors. 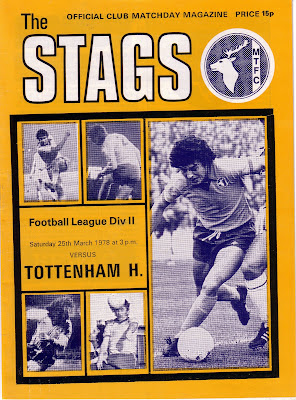 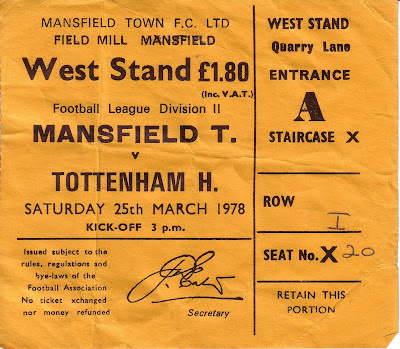