Bristol is a city in South West England, 105 miles west of London. With an approximate population of 400,000, and metropolitan area of 550,000, it is England's sixth, and the United Kingdom's eighth, most populous city. It received a royal charter in 1155 and was granted county status in 1373. For half a millennium it was the second or third largest English city, until the rapid rise of Liverpool, Manchester and Birmingham in the Industrial Revolution in the later part of the 18th century.

Another excursion courtesy of the Spurs Supporters Club, this time from London Paddington to Stapleton Road, a local station close to Eastville. From there a 10 minute escorted stroll enabled us to reach the ground.

The previous October at White Hart Lane, Spurs had scored nine goals without reply against Rovers. It marked the debut of Colin Lee who scored four in that match. For some reason BBC Match of The Day had selected the 2nd Division fixture that day (inspired? - Ed). This return fixture, witnessed by a crowd of 17,708, also saw Spurs take the points although the scoreline was much closer (2-3) than it should have been. A late spectacular own goal by Spurs keeper Barry Daines giving Rovers a sniff of salvaging a draw. Tottenham's goals were scored by John Pratt, Neil McNab and Chris Jones.

Those who remember Dennis might also remember him jumping into the back of a police van towards the end of this match. He and another had left their seats before the end of the match and were heading towards the exit at the time of the 'Daines' goal. Dennis was not amused when his companion complained loudly that Rovers had scored just when they were in the middle of a group populated by Bristol's finest thugs. 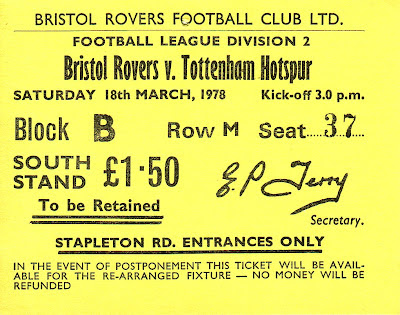 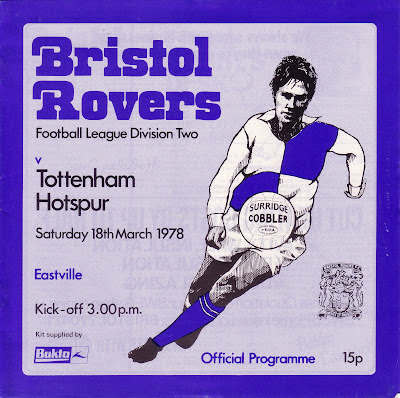 
Total visits to this venue = 3