The Aberdeen area has seen human settlement for at least 8,000 years. The city began as two separate burghs: Old Aberdeen at the mouth of the river Don; and New Aberdeen, a fishing and trading settlement, where the Denburn waterway entered the river Dee estuary. The earliest charter was granted by William the Lion in 1179 and confirmed the corporate rights granted by David I. In 1319, the Great Charter of Robert the Bruce transformed Aberdeen into a property-owning and financially independent community. Aberdeen's architecture is known for its principal use during the Victorian era of granite, which has led to its local nickname of the Granite City or more romantically the less commonly used name the Silver City, since the quartz in the stone sparkles in the sun. The hard grey stone is one of the most durable materials available and helps to explain why the city's buildings look brand-new when they have been newly cleaned and the cement has been pointed. Unlike other Scottish cities where sandstone has been used the buildings are not weathering and need very little structural maintenance on their masonry.


This was a mighty trek for the young Pieman. Having started work in London the previous April, he was in Cornwall on a family holiday at the time of this match. Negotiations were conducted with parents and he was allowed to return home early. A Friday night train journey from Kings Cross took 13 hours and I will confess to being tired on arrival at the Granite City. Pittodrie is walkable from the city centre and once on the main drag (King Street) we are probably looking at a 15 minute stroll. 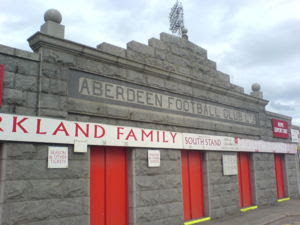 Prior to this fixture, a lot of the media attention surrounded the signings of Osvaldo Ardiles and Ricardo Villa by Spurs manager Keith Burkinshaw. However, despite being featured on the cover of the Aberdeen match programme, neither were present at this match. The Argentian world cup winners would have to wait a while before making their first Tottenham appearances. Aberdeen ran out comfortable winners, Spurs consolation strike being netted by Peter Taylor. This was followed by another overnight train journey back to London - great fun!! 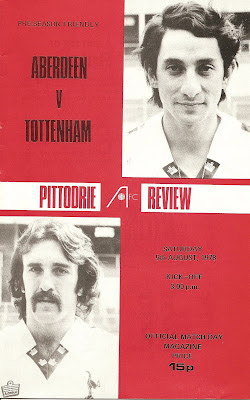