Wrexham is a town in the north of Wales. It is the administrative centre of the wider Wrexham County Borough, located in the east of the region. It is situated between the Welsh mountains and the lower Dee Valley alongside the border to Cheshire, England. As the largest town in the north of Wales, it is a major centre of the region's administrative, commercial, retail and educational infrastructure. Evidence of human activity in the Wrexham area has been found as far back as 1600 BC. However the first known settlement was known as Wristleham Castle, a motte and bailey located in what is now known as Erddig Park, established in 1161. King Edward I of England is on record as having briefly stayed at Wrexham during his expedition to suppress the revolt of Madog ap Llywelyn in 1294. Unusually for a large town, Wrexham is not built up alongside a major river. Instead it is situated on a relatively flat plateau between the lower Dee Valley and easternmost mountains of Wales. This situation enabled it to grow as a market town as a crossroads between England and Wales and later as an industrial hub – due to its rich natural reserves of iron ore and coal. It does however have three relatively minor rivers running through parts of the town. The town became part of the county of Denbighshire when it was created in 1536. In the 18th century Wrexham was known for its leather industry. There were skinners and tanners in the town. The horns from cattle were used to make such items as combs and buttons. There was also a nail-making industry in Wrexham. In the mid-18th century Wrexham was no more than a small market town with a population of perhaps 2,000. However, in the late 18th century Wrexham grew rapidly as it became one of the pioneers of the Industrial Revolution. The Industrial Revolution began in Wrexham in 1762 when the entrepreneur John Wilkinson (1728–1808) known as 'Iron Mad Wilkinson' opened Bersham Ironworks. Minera Lead Mines are the remains of the profitable lead industry that dates back to prehistoric times. In 1882 German immigrants set up Britain's first lager brewery under the name of Wrexham Lager.

Wrexham Football Club was formed in 1864 by members of the Wrexham Cricket Club, who wanted a sporting activity for the winter months, which makes them (after Sheffield, Cray Wanderers, Hallam, Notts County, and Stoke City) the sixth oldest football team In Britain. Their first game was played on 22 October 1864 at the Denbigh County Cricket Ground (The Racecourse Ground) against the Prince of Wales Fire Brigade. In 1890 Wrexham joined The Combination league, playing their first game against Gorton Villa on 6 September 1890, with Arthur Lea scoring Wrexham's only goal in a 5–1 defeat. Lea played for the club despite only having one arm, as did playing colleague James Roberts. Wrexham finished the season second from bottom in eighth place in the first season. Wrexham played in the Combination for four years before a rapid increase in costs resulted in the club joining the Welsh League in the 1894–95 season. Wrexham won the Welsh League both years that they were in it, but they then decided to return to the Combination, as despite the reduced support they received, the savings made on their travelling expenses outweighed the reduction in gate revenue. In 1921 Wrexham were elected to the newly formed Third Division North of the Football League. Their first League game was against Hartlepool United at the Racecourse in front of 8,000 spectators. Playing in blue shirts, Wrexham were defeated 0–2. The week after this defeat Wrexham travelled north to play Hartlepool and managed to get their revenge by beating them 1–0 in a hard-earned victory. It was during this particular season that Wrexham achieved many "firsts" in the club's history, such as when Ted Regan scored the club's first ever hat-trick, and also Brian Simpson became the first Wrexham player to be sent off in a League game when he was ordered from the field of play against Southport in January 1922. Charlie Hewitt was the club's first ever manager during this period. Wrexham played their inaugural match in Europe against Swiss side FC Zurich in Switzerland on 13 September 1972, the game finishing 1–1. In the return leg Wrexham won 2–1, advancing to the second round with a 3–2 win on aggregate. The second round drew Wrexham against Yugoslav side Hajduk Split. Over the course of two games the score finished 3–3 on aggregate with Wrexham matching their more illustrious opponents, but they were knocked out of the competition due to the away goals rule. 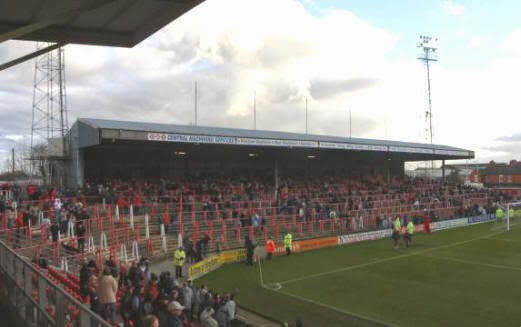 This Pieman ventured to North Wales for this FA Cup 4th Round Replay by football charter train. This was just as well as this match suffered a number of postponements due to bad weather. Every other day I left for work with the intention of going to Euston mid afternoon to catch the train, eventually I did! Chris Jones scored a hat trick for Spurs in a thrilling match that went to extra time. 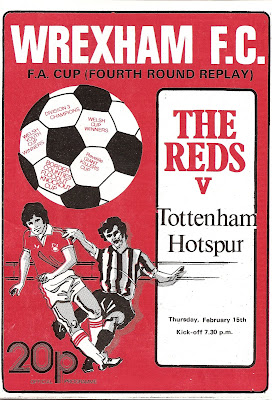