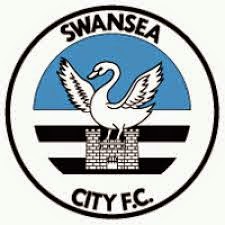 Swansea, officially known as the City and County of Swansea, is a coastal city and county in Wales. It is Wales's second largest city and the UK's twenty-sixth largest city. Swansea lies within the historic county boundaries of Glamorgan. Situated on the sandy South West Wales coast, the county area includes the Gower Peninsula and the Lliw uplands. Swansea is thought to have developed as a Viking trading post. Its name may be derived from Sveinn's island (Old Norse: Sveinsey) – the reference to an island may refer to a bank at the mouth of the river Tawe, or an area of raised ground in marshes. The Welsh name first appears in Welsh poems at the beginning of the 13th century, as "Aber Tawy". Following the Norman Conquest, a marcher lordship was created under the title of Gower. It included land around Swansea Bay as far as the River Tawe, the manor of Kilvey beyond the Tawe, and the peninsula itself. Swansea was designated chief town of the lordship and received a borough charter sometime between 1158 and 1184 (and a more elaborate one in 1304). The port of Swansea initially traded in wine, hides, wool, cloth and later in coal. At the beginning of the Industrial Revolution, the combination of port, local coal, and trading links with the West Country, Cornwall and Devon, meant that Swansea was the logical place to site copper smelting works. Smelters were operating by 1720 and proliferated. Over the next century and a half, works were established to process arsenic, zinc and tin and to create tinplate and pottery. The city expanded rapidly in the 18th and 19th centuries, and was termed "Copperopolis". Through the 20th century, heavy industries in the town declined, leaving the Lower Swansea Valley filled with derelict works and mounds of waste products from them. The Lower Swansea Valley Scheme (which still continues) reclaimed much of the land. Little city-centre evidence, beyond parts of the road layout, remains from medieval Swansea; its industrial importance made it the target of bombing, known as the Blitz in World War II, and the centre was flattened completely. The city has three Grade One listed buildings, these being the Guildhall, Swansea Castle and the Morriston Tabernacle. Whilst the city itself has a long history, many of the city centre buildings are post-war as much of the original centre was destroyed by World War II bombing on the 19, 20 and 21 February 1941 (the 'Three Nights Blitz'). Within the city centre are the ruins of the castle, the Marina, the Glynn Vivian Art Gallery, Swansea Museum, the Dylan Thomas Centre, the Environment Centre, and the Market, which is the largest covered market in Wales. It backs onto the Quadrant Shopping Centre, which opened in 1978.

The area around Swansea traditionally had been a rugby area, and despite previous attempts by a football club named Swansea Villa, there were no notable football clubs until the establishment of Swansea Town AFC in the summer of 1912. Following the lead of many other South Wales sides, joined the second division of the Southern League for the following season. A site owned by Swansea Gaslight Co., called Vetch Field due to the vegetables that grew there, was rented to be the club's ground. The club's first professional match was a 1–1 draw at the Vetch Field against Cardiff City on 7 September 1912. During that first season the Welsh Cup was won for the first time, and the following season the Swans became the first side to reach the First Round of the FA Cup. Following the First World War the Southern League dropped its second division, and with many clubs dropping out due to financial difficulties, the Swans were placed in the first division. After just four seasons in the Southern League, Swansea Town became founder members of the new Third Division of the Football League in 1920 and then Division Three (South) the following season. After just one season back from the Second World War, the Swans finished 21st in the Second Division and thus returned to Division Three (South) for the first time since 1925. The following season was one of consolidation; however in 1948–1949 the Swans stormed their way to winning the division for the second time. Only one point was dropped at home all season as the feat of the 1925 promotion side was emulated, with the side finishing a whole seven points ahead of second placed Reading. Following promotion, the Swans had another 15 years of Second Division football to look forward to, however despite what successive managers and chairmen were to say, Swansea Town only once during that time looked like they could genuinely challenge for promotion. In 1969 the club name was changed to Swansea City, and Roy Bentley's side celebrated by securing promotion back to the Third Division. A record run of 19 matches unbeaten provided the foundations for a promotion challenge in 1971–72, but an awful run towards the end of the season resulted in a mid-table finish. A poor start the following season, combined with falling attendances, saw Bentley resign, and he was replaced by Harry Gregg. Gregg failed to stop the rot and the club was back in the Fourth Division for 1973–74 season. Despite promising performances during the first half of the 1977–78 season, Harry Griffiths resigned as Swansea City's manager in February 1978, doubting his own ability to take the club any further. The new manager was former Liverpool, Cardiff City and Wales striker John Toshack. On 1 March 1978, at the age of 28, Toshack became the youngest manager in the Football League, with Griffiths as his assistant. Thus began a remarkable climb from the Fourth Division to the top of the entire league. Despite relinquishing his role as manager before the end of the season, this was Griffiths' team, and the promotion from the Fourth Division was largely his doing. During this season the Swans' record league win was achieved – 8–0 against Hartlepool United. Before promotion was secured, however, Harry Griffiths died of a heart attack on 25 April 1978 before the home game against Scunthorpe United. A further promotion was achieved next season and the club returned to the Second Division after an absence of 14 years, with Toshack himself coming off the bench to score the winning goal against Chesterfield and thus secure promotion.

This Pieman travelled to Swansea by train from London Paddington. The walk to the Vetch Field from Swansea station taking around twenty minutes. The Welsh side won an entertaining pre-season friendly by the only goal. 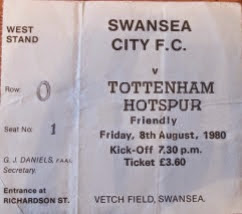 Subsequent visits to the Vetch Field