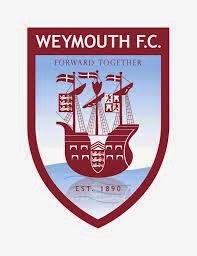 Weymouth is a seaside town in Dorset, situated on a sheltered bay at the mouth of the River Wey on the English Channel coast. The town is 11 kilometres south of Dorchester and 8 kilometres north of the Isle of Portland. The town is the largest settlement in Dorset following the unitary authorities of Bournemouth and Poole. Weymouth originated as a settlement on a constricted site to the south and west of Weymouth Harbour, an outlying part of Wyke Regis. The town developed from the mid 12th century onwards, but was not noted until the 13th century. By 1252 it was established as a seaport and became a chartered borough. Melcombe Regis developed separately on the peninsula to the north of the harbour; it was mentioned as a licensed wool port in 1310. The architect Sir Christopher Wren was the Member of Parliament for Weymouth in 1702, and controlled nearby Portland's quarries from 1675 to 1717. When he designed St Paul's Cathedral, Wren had it built out of Portland Stone, the famous stone of Portland's quarries. The resort is among the first modern tourist destinations, after King George III's, brother the Duke of Gloucester built a grand residence there, Gloucester Lodge, and passed the mild winter there in 1780; the King made Weymouth his summer holiday residence on fourteen occasions between 1789 and 1805, even venturing into the sea in a bathing machine. Weymouth's esplanade is composed of Georgian terraces, which have been converted into apartments, shops, hotels and guest houses. The buildings were constructed in the Georgian and Regency periods between 1770 and 1855, designed by architects such as James Hamilton, and were commissioned by wealthy businessmen.

Weymouth Football Club were founded in 1890 and played their first game on 24 September of that year. Nicknamed 'The Terras' due to their terracotta strip, the team won the Dorset Junior Cup for the first three seasons, becoming a senior club as the team rose in stature. Founder members of the Dorset League, Weymouth joined the Western League in 1907–08. The club embraced full-time professionalism in 1923 after winning the Western League, joining the Southern League in the process. By 1928–29, with debts mounting, the club withdrew from the Southern League to become amateur once again. They climbed back up the table and reached the Premier League and then folded for five years and reformed. The Second World War saw an end to football in Weymouth as the Recreation Ground was requisitioned for the War effort in 1939. The club reformed in 1947 on a semi-professional basis, and soon achieved promotion back into the Southern League. In successive seasons 1964–65 and 1965–66, The Terras were Southern League champions. Weymouth have enjoyed considerable FA Cup success since first entering in 1893–94. They first reached the national stages in 1905–06 when they were thrashed 12–1 by Gainsborough Trinity. In 1949 they lost 4–0 at Old Trafford to Manchester United in the Third round, then in 1962 they reached the Fourth round where they lost 2–0 at Deepdale to Preston North End.

This Pieman travelled to and from Weymouth by train from London Waterloo. The walk from the station to the Recreation Ground taking around ten minutes. A strong Tottenham Hotspur side defeated their hosts 6-1 in this friendly match arranged as part of the deal that took Graham Roberts to North London. 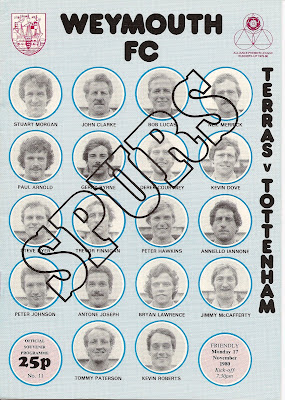