Lausanne is a city in Romandy, the French-speaking part of Switzerland, and is the capital of the canton of Vaud. The seat of the district of Lausanne, the city is situated on the shores of Lake Geneva. It faces the French town of Évian-les-Bains, with the Jura Mountains to its north-west. Lausanne is located 39 miles northeast of Geneva. The most important geographical feature of the area surrounding Lausanne is Lake Geneva. Lausanne is built on the southern slope of the Swiss plateau, with a difference in elevation of about 1,640 ft between the lakeshore at Ouchy and its northern edge bordering Le Mont-sur-Lausanne and Épalinges. Lausanne boasts a dramatic panorama over the lake and the Alps. The city has been traditionally quiet but in the late 1960s and early 1970s there were a series of mainly youth demonstrations confronted by the police. The next vigorous demonstrations took place to protest against the high cinema prices and since then the city returned to its old very sleepy self. 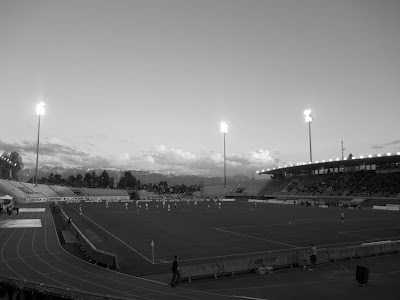 The football-section of Lausanne Sports was founded in 1896 under the name of Montriond Lausanne. However, the Lausanne Football and Cricket Club was established in 1860, believed to be the oldest football club on the European continent by some historians. The club took the name Lausanne-Sports FC in 1920 after the football section merged with the Club Hygiénique de Lausanne, a physical education club. The club plays at the Stade Olympique de la Pontaise, a 15,850 all-seater stadium used for the 1954 FIFA World Cup. This Pieman visited the city for a pre-season friendly match with Tottenham Hotspur which was won 3-0 by the hosts. The journey was made by train from Paris, having caught a ferry from Newhaven to Dieppe. 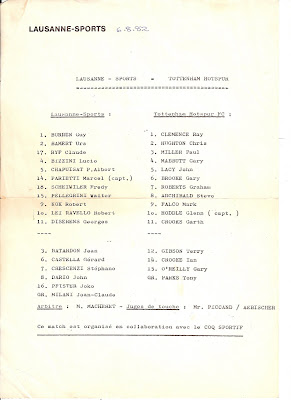 Attendance: 5,800
Programme: None issued (above is press sheet)