Rotterdam is the second-largest city in the Netherlands and one of the largest ports in the world. Starting as a dam constructed in 1270 on the Rotte River, Rotterdam has grown into a major international commercial centre. Its strategic location at the Rhine-Meuse-Scheldt delta on the North Sea and at the heart of a massive rail, road, air and inland waterway distribution system extending throughout Europe is the reason that Rotterdam is often called the "Gateway to Europe". During World War II, the German army invaded the Netherlands on May 10, 1940. Adolf Hitler had hoped to conquer the country in just one day, but his forces met unexpectedly fierce resistance. The Dutch army was finally forced to capitulate on May 15, 1940, following Hitler's bombing Rotterdam on May 14 and threatening to bomb other Dutch cities. The heart of Rotterdam was almost completely destroyed by the Luftwaffe; 900 civilians were killed and 80,000 were made homeless. Built mostly behind dikes, large parts of  Rotterdam are below sea level. The Rotte River no longer joins the Nieuwe Maas directly. Since the early 1980s, when the construction of Rotterdam’s second subway line interfered with the Rotte’s course, its waters have been pumped through a pipe into the Nieuwe Maas via the Boerengat. 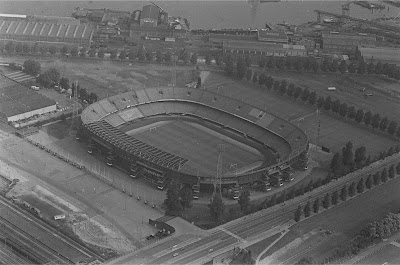 The football club Wilhelmina was founded on 19 July 1908 and played in blue-sleeved red shirts and white shorts. Between 1908, 1910, 1911 and 1912, the club underwent a series of changes of name and team colours, becoming Hillesluise Football Club in 1909 and then RVV Celeritas. Upon earning promotion to the National football association in 1912, the club renamed to become SC Feijenoord, after the city district in which the team was founded and again changed uniform, adopting the red and white shirts, black shorts and black socks they still wear today. In 1917, Feijenoord were promoted to the highest level of Dutch football, 1e klasse (1st division) and moved to the ground Kromme Zandweg. The club moved to the Feijenoord Stadion in 1937. In 1970 Feijenoord defeated Celtic to win the European Cup in Milan. In 1973, the club decided to change their name to Feyenoord, as people from outside the Netherlands found it difficult to pronounce the "ij" in Feijenoord. 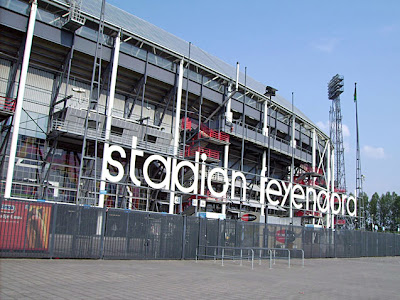 This Pieman travelled to Rotterdam by Ferry from Harwich to the Hook of Holland and then by train. Tottenham Hotspur, leading 4-2 from the first leg of this UEFA Cup tie, beat their hosts 2-0 in a match notable for the hostility off the pitch rather than the football on it. 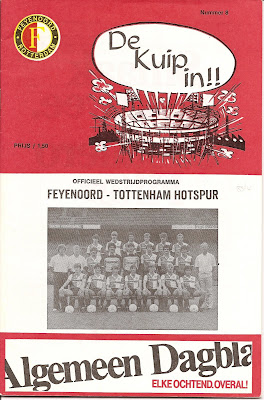