Stansted Mountfitchet is a village and civil parish in Uttlesford district in the county of Essex, England, near the Hertfordshire border, 35 miles north of London. Stansted Airport is 2 miles from the village. The village is served by Stansted Mountfitchet railway station. Stansted was a Saxon settlement (the name means 'stony place' in Anglo-Saxon) and predates the Norman invasion of England, although it was not until this invasion that it acquired the suffix Mountfitchet from the Norman baron who settled there. A small remnant of his castle remains, around which a reconstruction of an early Norman castle has been built. Believed to have been fortified originally in the Iron Age, and subsequently by the Romans and Vikings, construction of the Norman castle began in 1066. St Mary the Virgin's Church, built in the 1120s, is a redundant church under the care of the Churches Conservation Trust. The brick west tower was added in 1692. A chapel of ease dedicated to Saint John the Evangelist was built in 1889 nearer the centre of the village and is now the village church. Stansted Hall was built in 1871.

There are references to Stansted FC existing in 1892, but the founding date is put at the point when the club moved to Green Meadow. They won the Stansted & District Challenge Cup in 1914 and 1922, and by the 1930s they were playing in the East Herts League, which they won in 1934–35. In 1937 they moved to Hargrave Park. After World War II they were admitted to the Herts Senior County League, and joined the Premier Division in 1956. They were relegated to Division One after finishing bottom of the division in 1964–65, where they remained until being founder members of the Essex Senior League in 1971.

This Pieman travelled to Stansted by train from Harlow Town, the walk from the station to Hargrave Park taking around ten minutes. On a bitterly cold evening, Tottenham Hotspur won this friendly match 5-4. 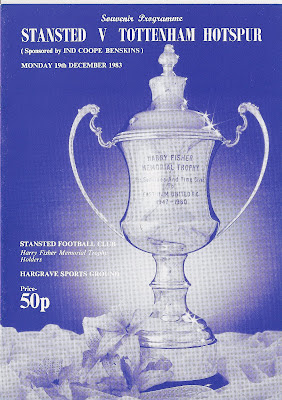