York is a walled city, situated at the confluence of the Rivers Ouse and Foss in North Yorkshire. The city has a rich heritage and has provided the backdrop to major political events throughout much of its two millennia of existence. The city was founded by the Romans in 71 AD, under the name of Eboracum. It became in turn the capital of the Roman province of Britannia Inferior, and of the kingdoms of Northumbria and Jorvik. In the Middle Ages, York grew as a major wool trading centre and became the capital of the northern ecclesiastical province of the Church of England, a role it has retained. Archaeological evidence suggests that Mesolithic people settled in the region of York between 8000 and 7000 BC, although it is not known whether these settlements were permanent or temporary.


Founded in 1922, York City FC joined the Football League in 1929 and has spent most of their history in the lower divisions. The club briefly rose as high as the second tier of English football, spending two seasons in the Second Division in the 1970s. At the end of the 2003–04 season the club lost their League status when they were relegated from the Third Division. They remained in the Conference National until the end of the 2011–12 season, when they were promoted back to the Football League following a 2–1 victory against Luton Town at Wembley Stadium in the 2012 Conference National play-off Final.


York City's original stadium Fulfordgate had been relatively inaccessible, with the tram service only having a single track to the ground. This resulted in concerns about the poor support being raised, and so director G. W. Halliday became convinced that the only solution was to move to a new ground. Bootham Crescent had been used by York Cricket Club for a number of years, but they decided to move to a new headquarters at Wigginton Road. Therefore the football club had a new home and he ground was officially opened on 31 August 1932, when York played Stockport County in a Third Division North match.

This Pieman recalls an entertaining match in which the home side comprehensively beat Northampton Town. It was good to stand on the terraces, although I will admit to being surprised at having to leave the stadium at half time to use the toilets! 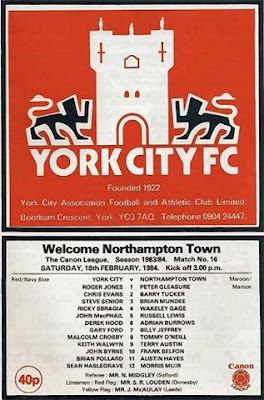