Southall is a large suburban district of west London, England, and part of the London Borough of Ealing. It is situated 10.7 miles west of Charing Cross. Neighbouring places include Yeading, Hayes, Hanwell, Heston, Hounslow, Greenford and Northolt. Southall is located on the Grand Union Canal (formerly the Grand Junction Canal) which first linked London with the rest of the growing canal system. It was one of the last canals to carry significant commercial traffic (through the 1950s) and is still open to traffic and is used by pleasure craft. The district of Southall has many other Anglo-Saxon place-names such as Elthorne and Waxlow. Its earliest record, from AD 830, is of Warberdus bequeathing Norwood Manor and Southall Manor to the archbishops of Canterbury. The southern part of Southall (roughly south of the railway) used to be known as Southall Green (and a section of the main north-south road in the area is still called The Green) and was centred on the historic Tudor-styled Manor House which dates back to at least 1587. Little of the building is original but much dates back to the days when Southall Green was a quiet rural village. The main east west road through the town is Uxbridge Road which was part of the main London to Oxford stagecoach route for many years and remained the main route to Oxford until the building of the Western Avenue highway to the north of Southall in the first half of the 20th century. First horse drawn, then electric trams (until 1936) and, then, electric trolleybuses, gave Southall residents and workers quick and convenient transport along Uxbridge Road in the first half of the 20th century before they were replaced by standard diesel-engined buses in 1960.

Southall FC was founded in 1871, and two seasons later they entered the FA Cup. After playing friendlies and cup competitions they joined the West London League as founder members in 1892, but only stayed for a single season. Four seasons later the club joined Division Two of the Southern Football League in 1896. The 1904–05 season saw the club attempt to go professional, but this left them with massive debts and they dropped out of the league at the end of the season, and also stopped playing in competitions the following season. The club returning to amateur status merged with another club called Southall Athletic, and moved to a new ground called at Western Road. In 1907 the club entered the Great Western Suburban League, where they remained until the First World War. After the War the club joined the Athenian League for the start of the 1919–20 season. They stayed in The Athenian league until the 1972–73 season during which time they won the league once in the 1926–27 season, two seasons after reaching the FA Amateur Cup final. Also during their Athenian league campaign the club reached the Third round of the FA Cup eventually losing to Watford. They became founding members of the Isthmian League Second Division for the start of the 1973–74 campaign. In their second season, they finished as runners up and gained promotion to the top division of the Isthmian league. Promotion to the top division also saw the club change its name to Southall & Ealing Borough. The club then spent three seasons in the top division before suffering two relegations in a row and finishing in the bottom division of the Isthmian League, this double relegation also saw the club change its name back to Southall.

This Pieman visited Western Road for an Isthmian League Division Two South match between Southall and Camberley Town. This followed a morning match at Stamford Bridge between Chelsea and Tottenham Hotspur. A train from London Paddington was followed by a short walk to Western Road. A close match saw the visitors clinch the points with a 2-1 victory. 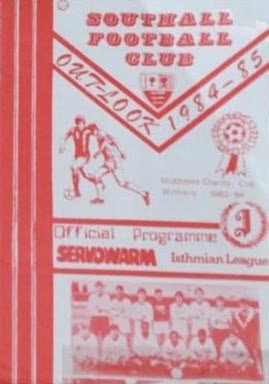