Shrewsbury is the county town of Shropshire and situated on the River Severn. It is a historic market town whose town centre has a largely unaltered medieval street plan and over 660 listed buildings, including several examples of timber framing from the 15th and 16th centuries. It is believed that Anglo-Saxon Shrewsbury was most probably a settlement fortified through the use of earthworks comprising a ditch and rampart, which were then shored up with a wooden stockade. The Welsh besieged it in 1069, but were repelled by William the Conqueror. Roger de Montgomery was given the town as a gift from William, and built Shrewsbury Castle in 1074, taking the title of Earl. The 3rd Earl, Robert of Bellême was deposed in 1102, in consequence of taking part in the rebellion against Henry I. In 1138, King Stephen successfully besieged the castle held by William FitzAlan for the Empress Maud during the period known as The Anarchy. During the English Civil War, the town was a Royalist stronghold and only fell to Parliament forces after they were let in by a parliamentarian sympathiser at the St Mary's Water Gate (now also known as Traitor's Gate). Shrewsbury Unitarian Church was founded in 1662. By the 18th century Shrewsbury had become an important market town and stop off for stagecoaches travelling between London and Holyhead on their way to Ireland; this led to the establishment of a number of coaching inns, many of which, such as the Lion Hotel, are extant to this day. Local soldier and statesman Robert Clive was Shrewsbury's MP from 1762 until his death in 1774. Clive also served once as the town's mayor in 1762. Shrewsbury in the Industrial Revolution was also on the Shrewsbury Canal, which linked it with the Shropshire Canal and the rest of the canal network of Great Britain. Despite this, Shrewsbury escaped much of the industrialisation taking place in 19th-century Britain due to its isolation from other large manufacturing towns and ports. 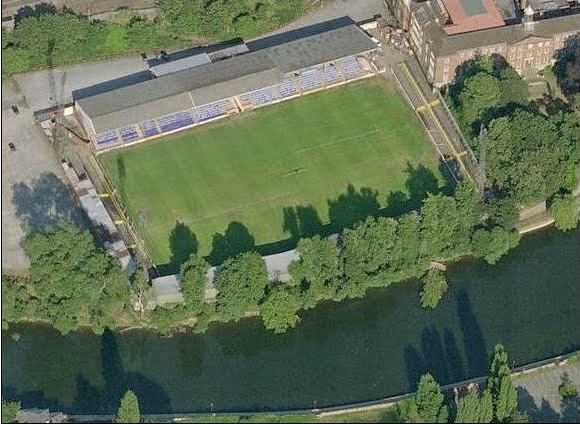 Shrewsbury Town FC was formed on 20 May 1886 at the Turf Hotel in Claremont Hill, Shrewsbury. This was following the demise of first Shropshire Wanderers and later indirectly after Castle Blues. The Blues were a rough team, leading to their demise after several games were marred by violence. The new team hoped to be as successful but without the notoriety. After friendlies and regional cup competitions for the first few seasons, Shrewsbury were founder members of the Shropshire & District League in 1890–91, later admitted to the Birmingham & District League in 1895–96. Many of the teams Town faced in the early days have vanished, however Shrewsbury met many of today's Football League and Conference teams, including Crewe Alexandra, Coventry City, Stoke City, Kidderminster Harriers and Stafford Rangers. In 1910, Shrewsbury looked to move to a new ground, having spent early years at locations across the town, notably at Copthorne barracks west of the town. The club moved to Gay Meadow on the edge of the town centre, within sight of Shrewsbury Abbey. After a run of good seasons in post-war years, Shrewsbury were admitted to the old Division 3 (North) of the Football League in 1950, after being Midland League champions in 1949–50. Shrewsbury Town was elected to the Football League Division 3 North for 1950–51 following the decision to expand from 88 to 92 clubs. Shrewsbury were then promoted to the Third Division in 1958–59. They remained in the third tier 15 years, slipping back to Division Four at the end of 1973–74. Arthur Rowley arrived from Leicester City in 1958, the club's first player/manager. During his playing and managerial career, he broke Dixie Dean's goal-scoring record, scoring his 380th league goal against Bradford City at Valley Parade on 29 April 1961. Retiring from playing in 1965 he remained manager until July 1968. Shrewsbury Town was promoted to the Third Division in 1974–75 as runners-up, before another successful season in 1978–79, when they were league champions under Ritchie Barker and later Graham Turner. Over 14,000 fans packed Gay Meadow on 17 May 1979 to see Shrewsbury seal promotion with a 4–1 win over Exeter City. 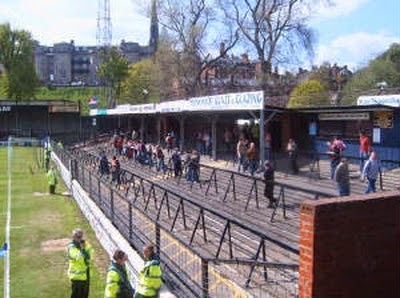 This Pieman visited Gay Meadow for a Sunday afternoon fixture with Crystal Palace. The visitors won an engaging encounter by two goals to nil. The journey was made by train from London Euston, with a connection at Wolverhampton for Shrewsbury. 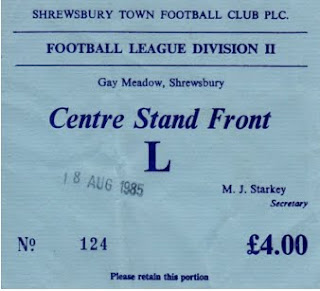 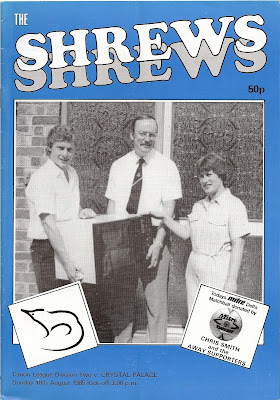