Belvedere is a district of south east London, England within the London Borough of Bexley. It is located south east of Thamesmead and 12 miles (19 km) east-south-east of Charing Cross. The area which is today known as Belvedere was for centuries part of Lessness Heath, the eastern parts of a narrow high ridge which stretches from the area of Lesnes Abbey to Erith. In 1847 this largely uncultivated, wooded estate, almost undivided was given by operation of the will of last Lord Saye and Sele to his cousin Sir Culling Eardley, who built properties in Belvedere until his death in 1863. Eardley constructed a large wooden tower on the heath to gain views over his estate to the river Thames, giving the area its name from the Italian "beautiful view". Eardley was persuaded to allow the construction on his property, of a Dissenters chapel, which was built so that the original wooden belvedere became its tower. In order that the public were able to attend this chapel, he constructed paths to it across Lessness Heath. Eardley had finished in 1861, after nearly 8 years of building, his chapel, now All Saints' Church, after the earlier chapel with belvedere burned down on the same site. At the same time Eardley constructed Villa Houses and reinforced the heath path to become Erith Road. The village of Belvedere soon grew up along the path which became Nuxley Road as Eardley gradually sold off the land. Belvedere was in Kent (and postally remains so) and formed part of the Municipal Borough of Erith before 1965 and development took place before the Second World War, with significant reconstruction after the Blitz. Despite this, Upper Belvedere and The Village still retains much of its Victorian and Edwardian charm and character. Between 1898 and 1961 Callender's Cable Works, at the Erith Works, Belvedere, was patron to Callender's Cableworks Band, an amateur brass band made up of employees of the company. The band was a prolific broadcaster on BBC Radio in the 1920s and 1930s.

An Erith FC had existed at the turn of the 20th century, however Erith and Belvedere FC was formed due to restructuring of Belvedere and District FC in 1922; which itself had only existed since 1918. On formation it joined the Kent League. Apart from two seasons (1929–31) in the London League, the Deres remained in the Kent League until the war, with third place in 1928–29 being their highest finish. After World War II, the Deres were founder members of the Corinthian League, winning the Memorial Shield (League Cup) for three seasons in succession (1948–50). The Deres were one of only three clubs to remain in the Corinthian League throughout its existence, and in 1963 they joined Division One of the Athenian League on its expansion to three divisions. They reached the Athenian Premier Division in 1971, and won the League Cup in 1974, beating Redhill 1–0, via a goal scored by Charlie Carroll. The final was played at Park View on 25 May. In 1978 the club opted to return to the Kent League, but in 1982 won the championship and were promoted to the Southern League.


This Pieman travelled to Belvedere Station from London Bridge. Park View is adjacent to the station. The home side beat visitors Edgware by the only goal of the match in this FA Cup, Preliminary Round Replay. 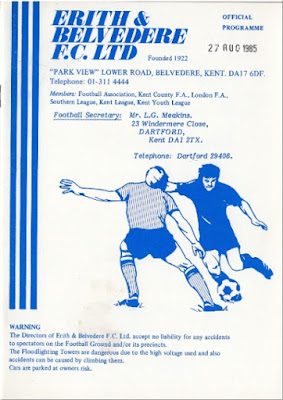