Kingsbury is an area in the London Borough of Brent, north west London. The name Kingsbury means "The King's Manor". It was historically a small parish in the Hundred of Gore and county of Middlesex. Until the nineteenth century it was largely rural with only scattered settlements. Although it lay close to London, development started slowly, and it was not until after World War I that the district became built up. An aircraft industry was established in the part of Kingsbury adjacent to Hendon aerodrome during the war, while the road network was improved to cater for the British Empire Exhibition in nearby Wembley in 1924. In 1934 the Kingsbury Urban District was abolished and merged once more in Wembley Urban District. The urban district became a municipal borough in 1937 and in 1965 the area became part of the London Borough of Brent. The first series of BBC children's drama Grange Hill was filmed at Kingsbury High.

Kingsbury Town FC were formed in 1919 when a group of local ex-servicemen met in the nearby Plough public house and organised a roped off area of farmland, in Townsend Lane, Kingsbury, to play football matches on. That first pitch straddled what is now the northern end of the present ground, and is now known as Silver Jubilee Park. The original name of the club is now forgotten, but, that group of men went on and progressed to amateur status, under various guises, to become Davis Sports in the old Hellenic pre-war league and finally to Kingsbury Town in 1923. They were promoted to the Senior Division in 1935 as champions of Division 2. In 1943 the club were elected to The Middlesex Senior League where they won the League Charity Cup in three successive seasons, 1944/45, 1945/46 & 1946/47. From here the club moved to The Parthenon League, with the Championship & Premier Charity Cup being won in successive seasons, 1951/52 & 1952/53 in addition to being finalists in The Senior Charity Cup in 1953. In 1953 the club’s pitch was re-sited to its present location. Kingsbury entered the Spartan League in 1959/60 and were beaten finalists in the League Cup that season, losing 3-1 to Hampton F.C. One of the club’s players in that final, Mark Hart, went on to become Chairman of the club during its most successful period in the mid to late 1980’s. In 1981 the stand on the west (clubhouse) side of the ground was completed and floodlights installed as the club moved back into The Athenian League. Season 1984/85 saw the club join the expanded Isthmian Football League and were placed in Division 2 (North). Season 1985/86 saw the club promoted to Division 1 as runners up to Stevenage Borough and also win the Middlesex County F.A. Senior Charity Cup. 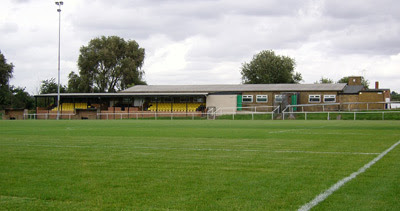 This Pieman travelled to Kingsbury Station on the Jubilee Line after work for this FA Cup Replay. The home side won an entertaining match by the odd goal in five.