Barking is an area of east London, and forms part of the London Borough of Barking and Dagenham. It is 8.8 miles east of Charing Cross. It was historically a fishing and agrarian settlement in the county of Essex and formed an ancient parish. Its economic history is characterised by a shift to market gardening, and industrial development to the south adjacent to the River Thames. The railway station opened in 1854 and has been served by the London Underground since 1908. As part of the suburban growth of London in the 20th century, Barking significantly expanded and increased in population, primarily due to the development of the London County Council estate at Becontree in the 1920s, and it became a municipal borough in 1931. It has formed part of Greater London since 1965. In addition to an extensive and fairly low-density residential area, the town centre forms a large retail and commercial district, currently a focus for regeneration.

The origins of the modern club are unclear, with several potential origins; Barking Institute was either formed around 1896 as Barking Working Lads' Institute (or possibly earlier as Barking Working Men's Institute) or was renamed Barking Rovers, who had been established in 1880 and later renamed by the Church Institute when they took over running it. The club won the Division One of the South Essex League in 1898–99, the Leyton & District League in 1899–1900, Division Two of the South Essex League in 1900–02 and Division Two A in 1901–01, before changing its name to Barking in 1902. They also played in the London League, winning Division One A in 1909–10, before winning the South Essex League again in 1911–12. In 1912 became founder members of the Athenian League. However, they withdrew after only two matches and their record was expunged. In 1919 the club changed its name to Barking Town and in 1920–21 won the Premier Division of the London League, before rejoining the Athenian League in 1923. In 1926–27 they reached the first round of the FA Cup, but lost to Gillingham in a replay. They also reached the final of the FA Amateur Cup, losing 3–1 to Leyton. They reached the first round of the FA Cup again in 1928–29, but lost 6–0 at Exeter City. In 1932 they reverted to the name Barking and in 1934–35 won the Athenian League title. In 1952 they switched to the Isthmian League, but had to wait until 1978–79 before winning the league. That season they also reached the second round of the FA Cup, defeating Yeovil Town in the first round, before losing 2–1 at home to Aldershot. The following season they reached the second round again, defeating Third Division Oxford United before losing 3–1 to Reading. In 1981–82 they took Gillingham to a replay in the second round, losing 3–1. Their last appearance in the second round came in 1983–84, when they lost 2–1 at Plymouth Argyle. They are currently in the Isthmian League Premier Division and play their matches at Mayesbrook Park.

This Pieman had not intended to visit Barking FC on this particular occasion. I actually set off to watch Tottenham Hotspur play Coventry City in the first match of the season. However, this fixture was postponed due to building work at Spurs not being completed on time (shambles). Therefore a couple of pints and bus down to South Tottenham station was followed by a train to Barking followed by a bus to Mayesbrook Park.  A decent match ensued between Barking and Dulwich Hamlet - all that was missing were goals! 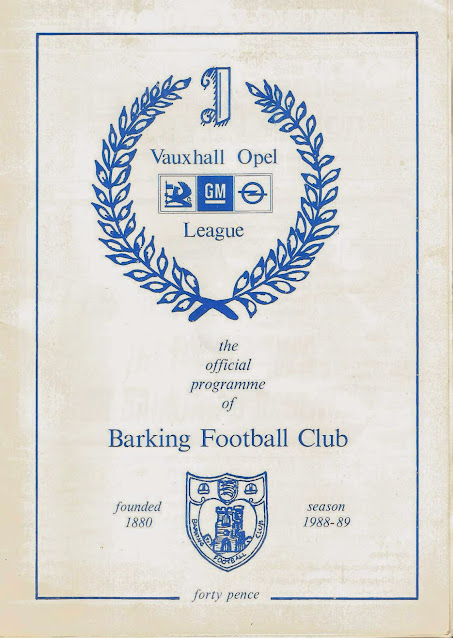 Other visits to Mayesbrook Park
Total 3