Beckenham is a town in south east London within the London Borough of Bromley. It borders the London Borough of Lewisham, lies north west of Bromley and is located 8.4 miles south east of Charing Cross. The settlement is referred to as Bacheham in the Doomsday Book of 1086. The name is thought to derive from Beohha's homestead. The name of the small stream - the River Beck - is most likely to have been named after the village. Although early written history tells little of the area, archaeological evidence at Holwood Park, where Stone Age and Bronze Age artifacts have been found, reveals some evidence of early settlers. With the arrival of the Normans, the Manor of Beckenham took on added importance, and controlled much of what is modern Beckenham. St George's Church was built in the 12th century. In the middle Ages, the manor lands were divided: at this time the estates of Kelsey and Langley came into being. Beckenham still remained a small village until well into the 19th century. The beginning of its growth began when, in 1773, John Cator built Beckenham Place and became Lord of the Manor. After he died in 1807, his sons soon became aware that the area in such close proximity to London was ripe for development, especially once the railway had arrived in 1857; and large villas began to be built around the new station.

Beckenham Town FC was formed in 1971, growing out of an amateur team called Stanhope Rovers, who had dominated the South East London amateur leagues since 1959. By 1971 it was apparent that they were the senior team in Beckenham and so they were re-incorporated as Beckenham Town, assuming the same name as an earlier club in the area which had folded in 1969. As Beckenham Town, the club continued to compete in the South East London Amateur League with distinction, relocating to Stanhope Grove, the former ground of the defunct earlier Beckenham club. In 1973 they switched to the Metropolitan London League and then in 1975, after being awarded senior status, they applied to and were accepted into the London Spartan League, starting out in Senior Division One and soon gaining promotion to the Premier Division in 1977–78. In July 1980 Beckenham moved to their present ground, Eden Park, which they obtained from The London Borough of Bromley on a 25-year lease. They joined the Kent League in 1982, and have been fixtures in the top division ever since.

This Pieman travelled by train to Eden Park station which is only a few hundred yards from the ground. The visiting police side won an entertaining match by the odd goal in three. 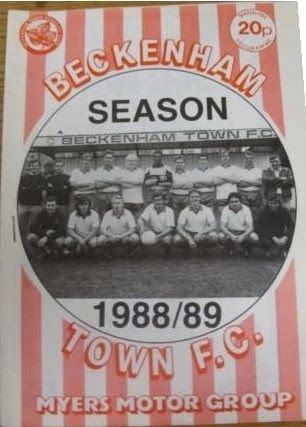