Waterlooville is a town in Hampshire approx 8 miles north of Portsmouth. Originally known as 'Wait Lane' and only containing a handful of cottages, Waterlooville owes its real foundation to an Act which was passed in 1810, authorising deforestation of the area. Legend has it that it was named after the pub that stood at the centre of town, then known as Waitland End. The Heroes of Waterloo was named because on its opening day a long column of weary soldiers, who had just disembarked at Portsmouth returning home from the Battle of Waterloo in 1815, decided to stop there and celebrate their victory. According to local legend, many of them settled there; at any rate the pub was renamed in their honour and the area around the pub became known as Waterlooville.

This match was not on our agenda as we set off for Hampshire in the morning. Having been dumped out of the FA Cup by Bradford City in the 3rd Round, Spurs had arranged a friendly at Fratton Park against Portsmouth. An early arrival to collect the match programmes was met with ‘Game Off’ signs. The pitch was certainly playable but for a friendly, I assume the clubs were not too bothered and the timing probably prevented Spurs from travelling. So what to do? It was raining but not too heavily –“there must be a match on in the locality”. A quick scan of the newspaper revealed that Waterlooville was our best option and having caught the train back up the line to Havant, we were able to reach Jubilee Park by taxi.

I recall the ground being situated in an industrial estate. Waterlooville won 3-1 against a Corby Town side boasting a strong Notts County flavour. Apart from manager Ray O’Brien, both Pedro Richards and Tristan Benjamin were in the starting eleven for the visitors. 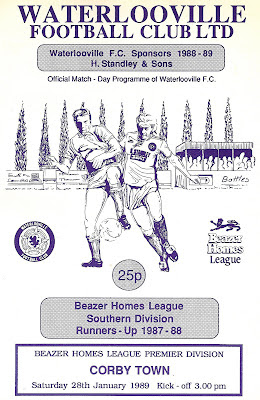