Staines is a Thames-side town in the Spelthorne borough of Surrey and part of the London Commuter Belt of South East England. It is a suburban development within the western bounds of the M25 motorway. Staines was the major producer of linoleum, a type of floor covering, after the formation of the Linoleum Manufacturing Company in 1864 by its inventor, Frederick Walton. Linoleum became the main industry of the town and was a major employer in the area up until the 1960s. In 1876 about 220 and in 1911 about 350 people worked in the plant. In 1956 the factory produced about 3,200 sq yd. of linoleum each week. The term 'Staines Lino' became a world-wide name but the factory was closed around 1970 and is now the site of the Two Rivers shopping centre.


Wheatsheaf Park is a relatively easy venue to reach. Regular trains from London Waterloo take half an hour to reach Staines station, from where a 20 minute stroll will get you to the ground. On the occasion of my initial visit, a fairly evenly contested match with Basingstoke Town resulted in a 1-1 draw. Wheatsheaf Lane has been the home of the club since it was purchased in 1951. However, a ground grading ruling meant that the club were demoted in 1984. Like many football stadiums, it has changed greatly over time; the most recent of these changes was the development of the main stand in the Wheatsheaf Lane End. Planning permission for this was granted by Spelthorne Council in 2000 and Staines Town returned to the revamped ground in February 2003. 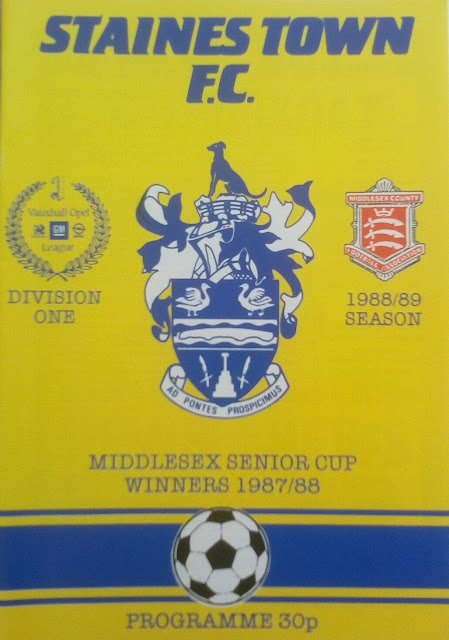 Prior to this match a few of us took advantage of the good range of real ales available at 'The George', the local Wetherspoon pub. The downside to this being that map reading skills went out of the window. Not a problem though as the Spurs coach was late arriving due to traffic and the match did not kick-off until 3.30

The monsoon conditions that have been plaguing the UK recently continued on this day and during the match there were regular cloudbursts. That said the playing surface was in superb condition and it was only towards the end that surface water became a problem.

Staines took the lead in less than 30 seconds from the start, following some erratic defending by Spurs and regained the lead following a Tottenham leveller.

The second period saw the young Spurs side step up a gear with a further 3 goals and despite a number of changes both sides continued to play football to entertain the 661 crowd. 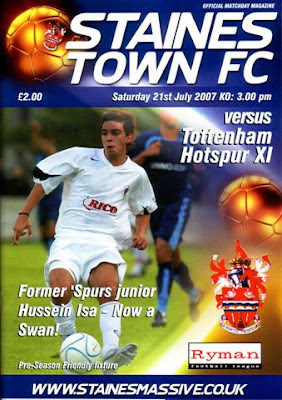 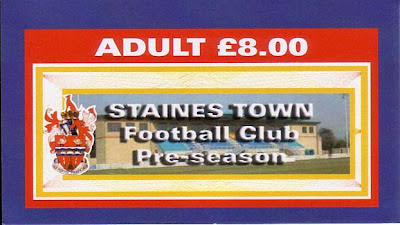