Whyteleafe is a village on the narrow facing slopes of a dry valley of the North Downs in Surrey. Neighbouring villages and towns include Woldingham, Caterham, Coulsdon, Warlingham, and Kenley. The village name comes from White Leaf field due to aspen trees growing in it, which was donated by a benefactor, Mr Glover, for the building of the church. As with Kenley, the history of its land before that being that of other parishes, in this case Caterham and to a lesser extent Warlingham and Coulsdon. The central land was bought by Mr. Glover in 1855 as a site for a house in a then scarcely inhabited valley. Its first primary school was built in 1892, enlarged in 1900 and again in 1907.

Whyteleafe FC was formed in 1946, replacing another club, Whyteleafe Albion, which had existed before World War II. The new club initially played junior football in such local leagues as the Thornton Heath & District League, before gaining senior status and joining the Surrey Senior League in 1958, at which time they moved to the Church Road ground where they play to this day. The site of Church Road was formerly farmland, and the farm's existing buildings were converted into the clubhouse and dressing rooms. The club originally planned to add a running track and cricket pitch to the complex, but these plans were abandoned. Floodlights were added in the early 1980s. Whyteleafe were Surrey Senior League champions on at least one occasion in the 1960s before switching to the London Spartan League in 1975. In 1981 they switched to the Athenian League and then in 1984 to the Isthmian League. In 1989 they were promoted to Division One. 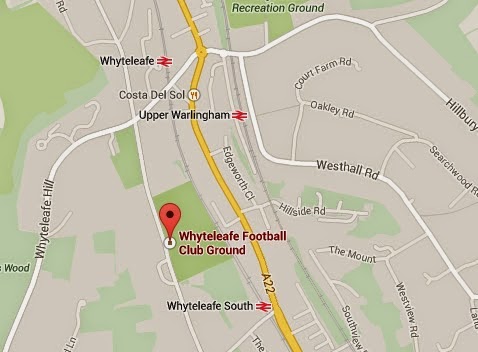 This Pieman visited Church Road for this Friday evening fixture. The journey was made by train from London Bridge to Whyteleafe station from where a five minute stroll enabled me to reach the ground. A very entertaining match saw a 2-2 draw with visitors Chesham United. 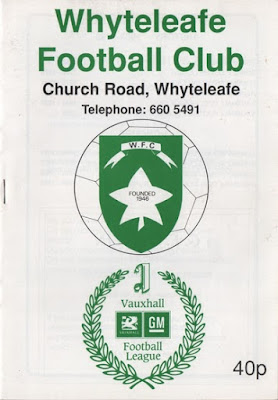