Croydon is a large town in South London, the principal settlement of the London Borough of Croydon. It is 9.5 miles south of Charing Cross. Historically a part of Surrey, at the time of the Norman conquest of England, Croydon had a church, a mill, and around 365 inhabitants, as recorded in the Doomsday Book of 1086. Croydon expanded during the Middle Ages as a market town and a centre for charcoal production, leather tanning and brewing. The Surrey Iron Railway from Croydon to Wandsworth opened in 1803 and was the world's first public railway. Later nineteenth century railway building facilitated Croydon's growth as a commuter town for London (including the City of London). By the early 20th century, Croydon was an important industrial area, known for car manufacture, metal working and its airport. In the mid 20th century these sectors were replaced by retailing and the service economy, brought about by massive redevelopment which saw the rise of office blocks and the Whitgift shopping centre. Croydon was amalgamated into Greater London in 1965, though recent polls suggest most local people still think of Croydon as being in Surrey. The town is unique in Greater London for its Tramlink light rail transport system.

Croydon Amateurs FC was founded on 17th April 1953 to provide senior amateur football in the then County Borough at the newly built Croydon Sports Arena in South Norwood. The original players came from some of the stronger clubs playing in local football and the club spent their first ten years in the Surrey Senior League but whilst failing to win the championship (thrice finishing runners-up), evolved into one of that competition's strongest outfits. In 1963–64, they joined the Spartan League, winning the league title at the first attempt in their only season in the competition. 1964 saw them join the Athenian League where they spent the next ten years, winning the Second Division title in 1965–66, suffering relegation four years later and then gaining two successive promotions to the Premier Division as runners-up to Herne Bay (1970–71) and Harlow Town (1971–72) under the management of Jimmy Rose. Rose's departure to Dulwich Hamlet saw a mass player exodus and a season of struggle ensued. 1973 saw the suffix Amateurs dropped due to the impending changes to the status of players and a year later, under the management of Ted Shepherd, election to the expanding Isthmian League. Two seasons later, after an unbeaten 1975–76 campaign, the club gained promotion to the Isthmian's top division – initially titled Division One but then re-titled the Premier Division where they spent twelve seasons before relegation to the First Division in 1989. 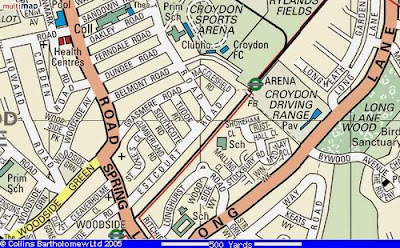 This Pieman travelled to Croydon Sports Arena from London Bridge to Norwood Junction. From there it took around 20 minutes to walk to the ground. A fairly even encounter saw the home side defeat Chalfont St Peter by the odd goal in three. 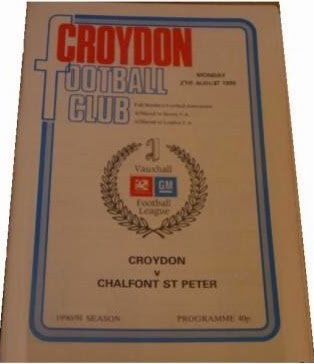