Barkingside is a district of Ilford in the London Borough of Redbridge, Northeast London. It was historically part of Essex until 1965, when the Greater London boroughs were created. Barkingside is chiefly known for the children's charity Barnardo’s, which was founded there in 1866. Some of the oldest buildings in Barkingside include the Barnardo's chapel, the underground station, which was originally an Edwardian mainline station, and Holy Trinity Church, which dates from 1840. Sir Trevor Brooking CBE was born in Barking and attended the Ilford County High School in Barkingside.

Barkingside FC was formed by a small group of enthusiasts in 1898, playing in the Ilford League. However, the club disbanded in 1922–23 due to lack of support but resumed in 1925 as Barkingside Boys Guild in the Ilford Minor League. The name was then changed to Barkingside Old Boys and then the "old boys" prefix was dropped in the 1930s. The club gained the use of a pitch at Barkingside Recreation Ground, where they played for 25 years before moving to their present ground in Station Road - Oakside Stadium.

Oakside Stadium itself is adjacent to Barkingside Underground station. And despite technically being an underground station, by the time the Central Line reaches Barkingside it is overland so the noise of the trains rumbling past is a constant accompaniment to the game. You enter the ground at one corner of the side which runs alongside the train line. This corner is the real focal point of the ground as it contains the car park, the changing rooms, the snack bar and the excellent clubhouse. This particular match saw a very young Tottenham Hotspur team take on a Barkingside outfit managed by former Spurs hero John Pratt. A single goal was all there was between the sides. 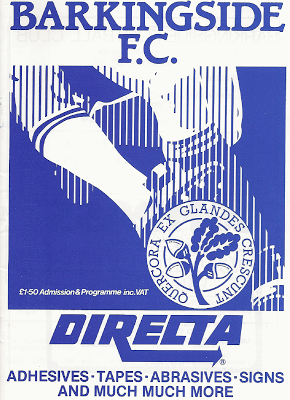