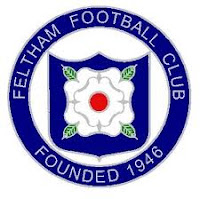 Feltham is a town in the London Borough of Hounslow, at the edge of west London. Feltham is centred 13.5 miles west south west of the conventional Centre of London and 2 miles south of Heathrow Airport. Feltham formed an ancient parish in the Spelthorne Hundred of Middlesex. It has a record in the Doomsday Book which records 21 households and an annual value to its lord of the manor of six pounds sterling, taxable at 12 geld units and was held as lord and tenant-in-chief by Robert, Count of Mortain. A large area of ten cultivated ploughlands is recorded. In 1831 Feltham occupied an area of 2,620 acres, stretching into Hounslow Heath and had a population of 924. The Waterloo to Reading Line established a station here from its construction in 1848. From 1894 to 1904 the Feltham parish was included in the Staines Rural District. In 1901 the parish had a population of 4,534 and accordingly in 1904 it was split from the rural district to form the Feltham Urban District. In 1932 the parishes of Hanworth and East Bedfont were also transferred from the Staines district to Feltham Urban District. Feltham has been associated with land and air transport for more than a century. The Feltham tramcar was once manufactured and ran along the tracks of many municipal operators, though never in Feltham itself. In the same area of the town, aircraft manufacture was an important industry, particularly during the war years. Feltham was in the early and mid-twentieth century home to Britain's second largest railway marshalling yard, which was geared towards freight, and was a target for German air force bombs during World War II.

Feltham Football Club was originally established in 1946 as Tudor Park F.C., the club changed its name to Feltham in 1963 in recognition of being granted senior status. In 1981, they won Isthmian League Division Two.

This Pieman travelled to Feltham station from London Waterloo for this midweek match against Ruislip Manor. It took less than ten minutes to walk from the station to Feltham Arena. The match was evenly contested and the 1-1 draw was a fair reflection of this.