Camberley is a town in Surrey, England, 31 miles southwest of central London, between the M3 and M4 motorways. The town lies close to the borders of Hampshire and Berkshire; the boundaries intersect on the western edge of the town where all three counties converge on the A30 national route. It is the main town in the borough of Surrey Heath.  Camberley's suburbs include Crawley Hill, Yorktown, Heatherside (despite being separated by the M3 motorway) and the Old Dean district. The town as it now stands has its roots in the building of The Royal Military College, which later became the Royal Military Academy, Sandhurst, in 1812. A settlement known as "New Town" grew in the area around the college which in 1831 was renamed Yorktown, after Prince Frederick, Duke of York and Albany. During the 19th century, Camberley grew in size. This was given added impetus with the arrival of the branch-line railway and railway station in 1878 and a reputation for healthy air, due to the vast number of pine trees, which were said to be good for those suffering from pulmonary disorders. By the end of the century the population had reached 8,400. Since then, the town has absorbed the original settlement of Yorktown, which is now regarded as part of Camberley. Camberley falls under the siren test area of Broadmoor Hospital, a secure mental hospital in nearby Crowthorne. The siren was installed following a public outcry at the escape of child-murderer John Thomas Straffen in April 1952. The siren is still tested every Monday at 10am. In 1969 there was an outbreak of rabies when a dog, just released from a sixth month quarantine after returning from Germany, attacked two people on Camberley Common. The scare resulted in restriction orders for dogs and large-scale shoots to carry out the destruction of foxes and other wildlife. 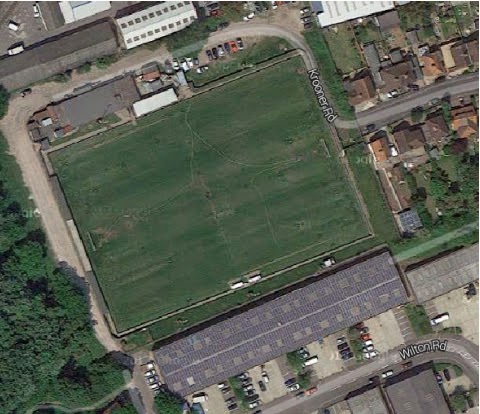 Camberley Town F.C was founded in 1895 as St. Michael's, Camberley F.C.; the club was renamed Camberley & Yorktown F.C. in 1901. A further change of name occurred after the Second World War, when the club was simply called Camberley F.C. During the 1960s Camberley were struggling financially whilst another club in the town, Camberley Wanderers, had money but no home ground. Wanderers had been a youth only club from their formation in 1950 until 1965 when they entered an adult side into the Parthenon League. After two seasons as an adult team their committee decided it made sense to merge with Camberley to become Camberley Town F.C. The merger took place on 2 June 1967. The club play their home matches at Krooner Park which was paid for with the winnings of a horse named Krooner who won two races at Haydock Park in 1920. It was officially opened on 26 December 1923. Before then the team played their matches on a variety of grounds including the London Road Recreation Ground, Martin's Meadow and Southwell Park Road. The latter two sites are now covered by housing. Due to financial difficulties Krooner Park was sold back to the local Council in 1939 with the Council guaranteeing the ground be retained in perpetuity and as so long as the club is in existence the ground would be rented to them in priority to any other body. Floodlights were installed at the ground in 1974 with the first floodlit match being a friendly against Crystal Palace on 14 October. The attendance wasn't counted on the night but estimates put the crowd at between 3100 and 3500. This is believed to be a record for the ground.

This Pieman travelled to Krooner Park by train from London Waterloo to Camberley station. From there to the ground the walk took around 15 minutes. The home side edged past visitors Feltham & Hounslow Borough by the odd goal in five. 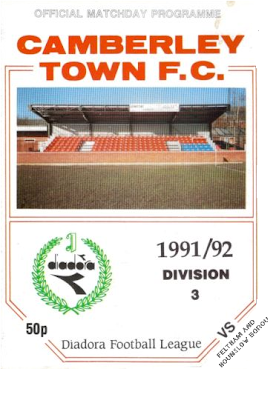