Leatherhead is a town in Surrey, England on the right bank of the river Mole, and at the edge of the contiguous built-up area of London. Its local district is Mole Valley. The origins of the town of Leatherhead are Anglo-Saxon. Ashtead lay within the Copthorne hundred by the formation of the Kingdom of England. The Leatherhead Museum has traced the history of the town from its beginnings in about AD 880 when it was known as Leodridan meaning "place where people [can] ride [across the river]" in the Anglo-Saxon (Old English). Later in the Doomsday Book of 1086 it was called Leret. Later forms recorded are "Lereda", "Ledreda", "Leddrede" (all second half of 12th century). The early settlement appears to have grown up on the east side of the River Mole, although Hawk's Hill, on the west side of the river, is said to be the site of an old Saxon burial ground. A market serving the developing agricultural economy developed at the crossroads and in 1248, Henry III granted to Leatherhead a weekly market and annual fair. The town survived an extensive fire in 1392, after which it was largely rebuilt. In common with many similar medieval towns, Leatherhead had a market house and set of stocks, probably located at the junction of Bridge Street, North Street and High Street. The Running Horse pub dates back to 1403 and is one of the oldest buildings in Leatherhead. It is on the bank of the River Mole, at the southern approach to the town centre. History has it that Elizabeth I once spent a night at the inn when floods made the River Mole impossible to cross.

Leatherhead FC was founded in 1907 as Leatherhead Rose and originally played friendlies. In 1909 they joined the Dorking and District league and won the league at the first attempt. After the First World War the team re-joined the Dorking and District league and again won the league. The following season they joined the Kingston and District League and went on to win three league titles until the Second World War started. Leatherhead also had another local club Leatherhead United who were formed in 1924, and went on to win Division One of the Sutton and District League in the 1925–26 season. United also finished third in the Premier League in the 1928–29 season, behind Leatherhead Rose who were runners-up. In the early 1930s Fetcham Grove based United joined the Surrey Junior League and became Champions at the end of the 1933–34 season. This enabled United to join the Surrey Intermediate League, but they were relegated after a few seasons at the end of the 1936–37 campaign. After the Second World War officials of the two Clubs met and on May 27, 1946 Leatherhead Football Club was officially formed at a public meeting. The two clubs pooled their financial resources and selected United’s Fetcham Grove ground to be used as their home pitch. The club then joined the Surrey Senior League for the start of the 1946–47 season. They won the Surrey Senior League four times in a row and left the league to join the Metropolitan & District League for the 1950–51 season. The next season they became founding members of the Delphian League, where they played for seven seasons before joining the Corinthian League. In the 1962–63 season they became the last ever Corinthian League champions, as the league was disbanded and along with most of the other sides, joined the enlarged Athenian League in the new Division One. At the end of their first season in Division One they were promoted to the Premier Division as Champions. The club reached the semi-finals of the FA Amateur Cup in 1969, losing to eventual winners Skelmersdale United, and again in 1971, falling to Ilford. The hero of this era was “Nobby” Skinner, noted for his ability to 'poach' a goal out of nothing. After these cup runs further progress was made in the league when the club joined the Isthmian League for the start of the 1972–73 season. In the 1974–75 season, The Tanners were national news with an FA Cup run that saw them beat Isthmian League rivals Bishops Stortford, League side Colchester United and 3rd Division Brighton. The following year another budding FA Cup run saw Leatherhead beat Cambridge United. In 1978, the side reached the final of the FA Trophy, played at Wembley, only to lose 3–1 to Altrincham. The Tanners also reached the FA Cup first round in 1980 but lost 5–1 to Exeter City. Three seasons later though the club struggled in the league and was relegated to Division One in the 1982–83 season, and further relegation followed at the end of the 1989–90 season when they were relegated to Division Two South.

This Pieman travelled to the midweek fixture by train from London alighting at Leatherhead Station. The walk to Fetcham Grove took around ten minutes. Visitors Ruislip Manor were worthy winners of the match, scoring three times without reply. 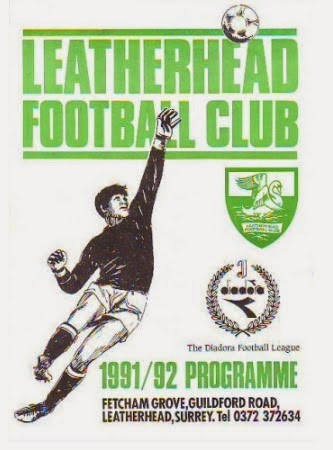