Marlow (historically Great Marlow or Chipping Marlow) is a town and civil parish within Wycombe district in south Buckinghamshire, England. It is located on the River Thames, 4 miles (6.5 km) south-southwest of High Wycombe, 5 miles (8 km) west-northwest of Maidenhead and 33 miles (53 km) west of central London. It is recorded in the Doomsday Book as Merlaue. Marlow owes its importance to its location on the River Thames, where the road from Reading to High Wycombe crosses the river. It had its own market by 1227 (hence the name Chipping Marlow), although the market lapsed before 1600. From 1301 to 1307 the town had its own Member of Parliament, and it returned two members from 1624 to 1867. 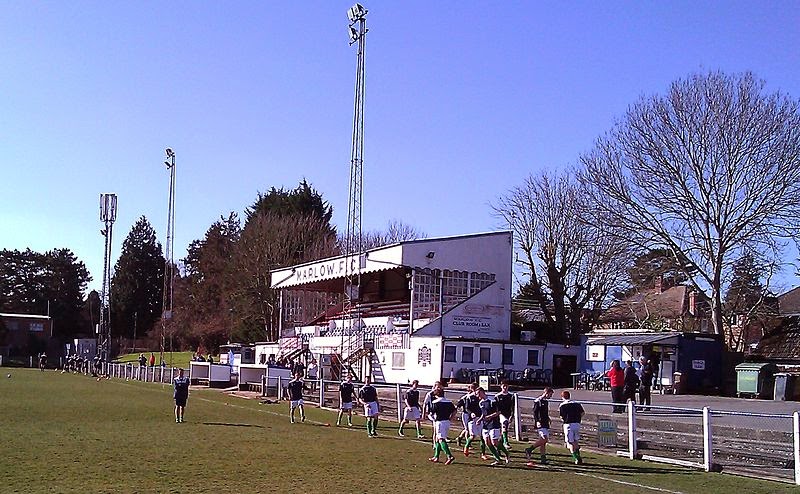 Marlow F.C. was formed at a meeting at the Compleat Angler Hotel on 22 November 1870. They play at the Alfred Davis Memorial Ground. They are the only football club in England to have applied for entry into the FA Cup every season since its inception in 1871. During the 1890s the club was also known as Great Marlow, and in 1894 they turned down the opportunity to join the Southern League in order to remain amateur, allowing Tottenham Hotspur to take their place. Instead, they joined the Spartan League in 1908, but resigned midway through their third season in the league. In 1919 the club left its Crown Meadow ground to move to Star Meadow, resulting in them leaving the Great Western Suburban League and dropping into the Reading League. In 1928 they moved to a new ground, which was named after their long-serving secretary, Alfred Davis. They rejoined the Spartan League in 1928, winning Division Two West in 1929–30. In 1965 they joined Division Two of the Athenian League, and were promoted to Division One after finishing third in 1970–71. When the league disbanded in 1984 they joined Division Two North of the Isthmian League. They were transferred to Division Two South the following season, and in 1986–87 they finished second and were promoted to Division One. The following season they won Division One and were promoted to the Premier Division.

This Pieman visited Marlow for an interesting FA Cup 3rd Qualifying Round match with Romsey Town, the home side progressing 2-0. The journey was made via London Paddington to Marlow station which is around a 20 minute walk away from the Alfred Davies Memorial Ground.